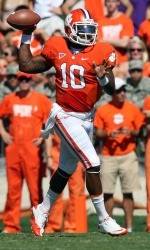 CLEMSON, SC – Tajh Boyd said he never really worried about losing Saturday’s game because he knew there was enough talent on the football field for his Clemson Tigers to get the job done.

Though he was not worried, no one could blame the Clemson quarterback if he was a little nervous as he called for the ball on third-and-13 from his own 39 and clinging to a one-point lead over the underdog Wofford Terriers. But, Boyd showed a lot of poise in a pressure situation as he stood tall in the pocket and delivered a perfectly thrown ball to DeAndre Hopkins along the sideline.

Hopkins corralled the pass for 13 yards to the Wofford 48, keying an eight-play, 58-yard drive which helped clinch the Tigers’ 35-27 victory in front of 73,500 in Death Valley.

“That was a critical throw in a clutch situation,” Clemson Offensive Coordinator Chad Morris said. “We had to have it or we were going to have to punt the ball back to them.”

Clemson (2-0) needed it and every bit more after the Terriers used its unorthodox offense to push it to the brink in a game many thought would be an easy victory.

What the Terriers (1-1) were was a team that scored on two of their first three possessions – a 27-yard touchdown run by quarterback Mitch Allen and a 66-yard scoring pass from Allen to Brenton Bersin. Wofford led the entire first half and was within one point, 28-27, heading into the fourth quarter.

“We weren’t worried because Coach Morris has been talking about matching points since he got here,” said Boyd, who completed 18-of-29 passes for 261 yards and three touchdowns. “Coach told us when he was at Tulsa they had to score at least 40 points a game to match people so we kind of have the same mentality here.

“We are a team. Sometimes the defense helps us out so sometimes we have to score as many points as we can so we can help them out.”

Clemson got those points thanks to 42-yard Boyd to Martavis Bryant pass, a 74-yard Andre Ellington touchdown, a 38-yard pass from Boyd to Sammy Watkins, a five-yard Boyd touchdown and a 17-yard pass to Hopkins.

And when Clemson needed it the most, it was usually one of the veteran or more experienced players that came through. The Tigers got big plays from tight end Dwayne Allen, wide receiver Jaron Brown, defensive end Andre Branch, defensive tackle Brandon Thompson, Ellington and Hopkins.

“We had some key veterans step up. Jaron had a great camp and has continued to have two very strong games for us and has made some big plays. (DeAndre) we call a veteran and he is just a sophomore and Jaron’s an old guy so we are a little work in progress as I said when we started the season. We will have to play are way into being the type of team I think we are capable of being.”

That’s exactly what Tajh Boyd proved when he stepped up into that pocket and fired that 13-yard completion to Hopkins. Now it’s time to do it against defending National Champion Auburn.