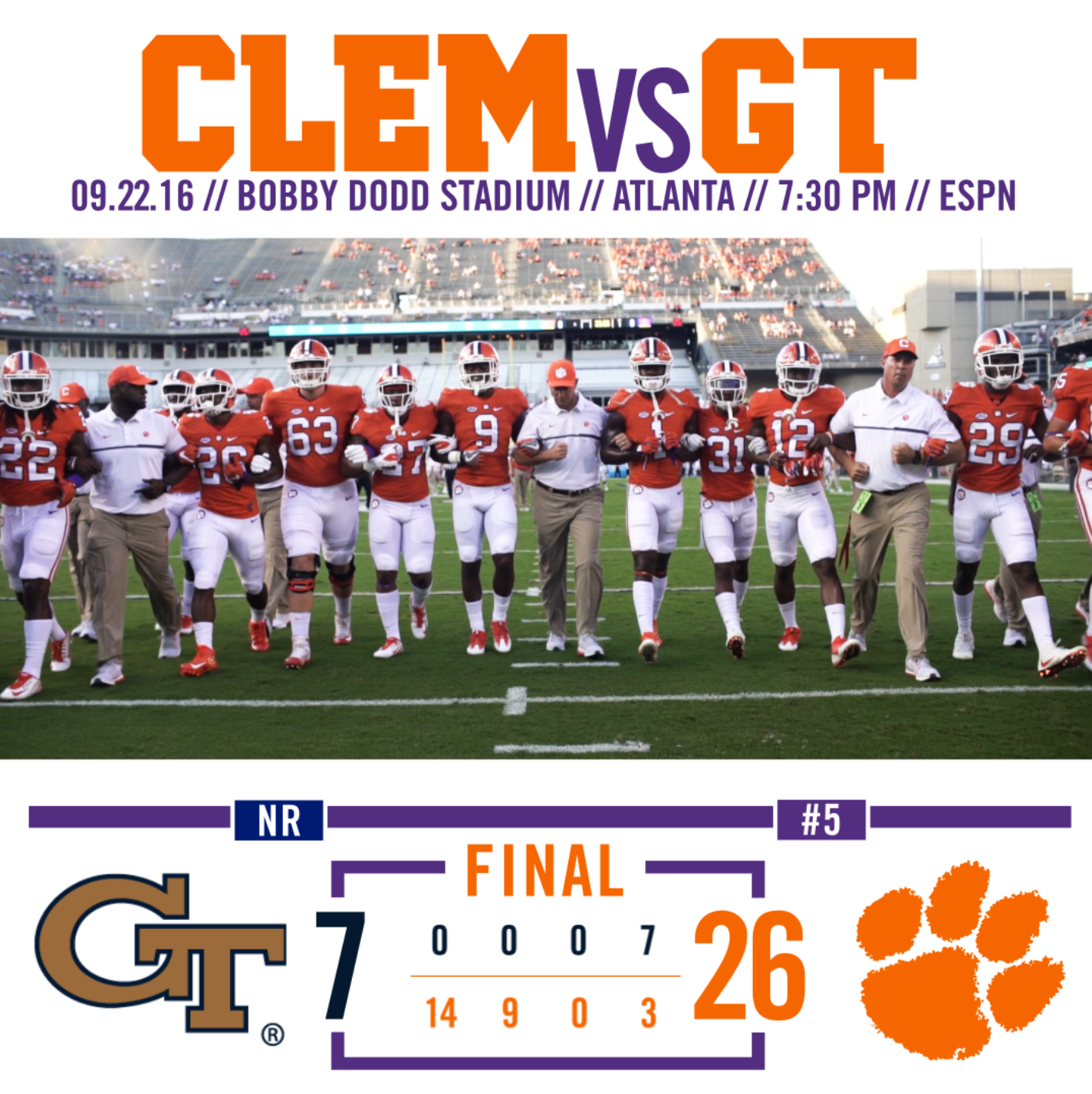 ATLANTA — Clemson snapped a five-game road losing streak in the series against Georgia Tech on Thursday, as the Tiger defense was once again dominant against the Yellow Jackets’ triple option attack in a 26-7 victory at Bobby Dodd Stadium. With the win, No. 3 Clemson moved to 4-0 on the season, 1-0 in the ACC. Tech fell to 3-1 overall, 0-1 in league play.

Brent Venables’ stingy unit allowed only 22 yards of total offense in the opening half and 124 for the game. Offensively, the Tigers were efficient in the opening half behind the passing of Deshaun Watson, who was 32-48 for a season-high 304 yards and two touchdowns.

Clemson wasted no time in announcing its presence, as the Tigers put together a perfect 75-yard drive that ended with Mike Williams’ first receiving touchdown of the season, a four-yarder from Deshaun Watson. He marched Clemson into scoring position on its next two drives as well, the second of which ended with a Wayne Gallman one-yard plunge for a touchdown and a 14-0 score after a quarter.

The Tigers put together a great scoring chance late in the second quarter, but Watson was intercepted after a miscommunication with his receiver. Georgia Tech returned the ball two yards, but fumbled into the endzone and the play resulted in a safety for the Tigers. Following the free kick, Clemson took advantage by getting in Tech’s redzone again. Watson threw a laser for a touchdown to Jordan Leggett, his first score of the 2016 season.

The Tigers’ dominance was on display in the opening half. Clemson ran 56 total plays, compared to just 21 for Tech. The Yellow Jackets were stuffed for only 22 total yards, most of which came on the final play before halftime. Clemson owned a 325-yard advantage as well in the first 30 minutes of play.

The Jackets finally reached the scoring column in the fourth quarter, but Clemson answered with a career-long tying 47-yard field goal from Greg Huegel to close out the game’s scoring. The Tigers return home for a showdown with Louisville, who is ranked No. 3 in the latest AP poll. The game was announced earlier this week as an 8 p.m. kickoff televised by ABC.