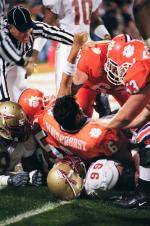 Clemson finally defeated Bobby Bowden in Death Valley with a convincing 26-10 victory. It was just the second of what would be three losses for the Seminole in the 2003 season. Florida State was ranked third in the nation entering the game and it was the highest ranked team Clemson has beaten in history. Charlie Whitehurst threw for 272 yards to lead Clemson as Bobby Bowden suffered a loss on his birthday for the first time ever. It was the first loss for Bobby Bowden in Death Valley after six straight wins, the longest winning streak for any opposing coach in the facility.