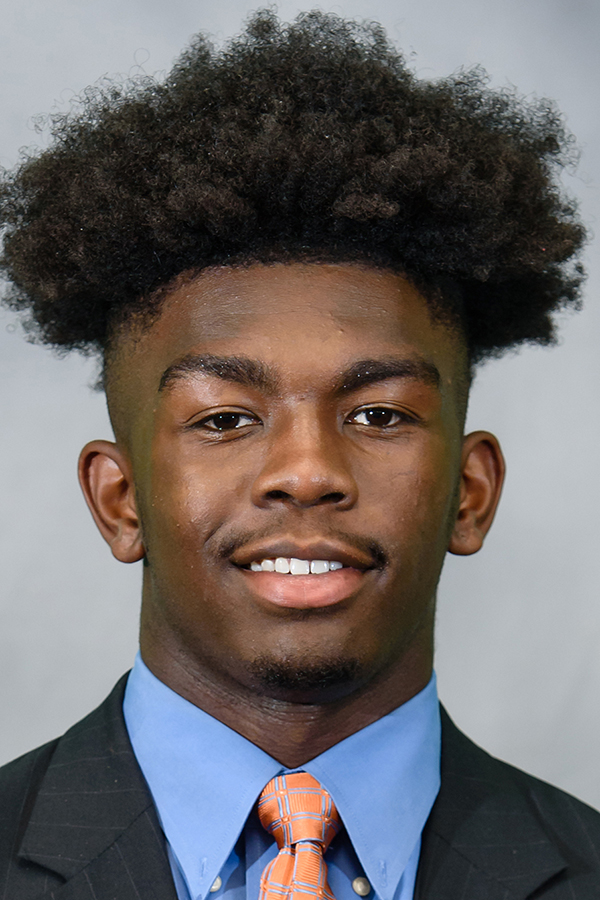 Missed the 2020 season but finished his Clemson career spanning 2018-21 having recorded 158 passes for 2,379 yards with 20 touchdowns in 1,400 snaps over 39 career games (24 starts) … concluded his time at Clemson ranked tied for fifth in Clemson history in career receiving touchdowns, 10th in career receiving yards and 11th in career receptions … caught a pass in 37 straight games, the third-longest streak in Clemson history as of the end of the 2021 season … posted a dazzling true freshman season in 2018 in which he caught 46 passes for a team-leading 1,000 yards with nine touchdowns in 15 games … announced his presence on the game’s biggest stages as a freshman, catching six passes for 148 yards with two touchdowns in the Cotton Bowl and six passes for 153 yards with one touchdown in the College Football Playoff National Championship.

2021: Made an inspiring comeback from a career-threatening spinal condition and was named as one of two recipients of the ACC’s Brian Piccolo Award, which is presented annually to the conference’s most courageous player(s) … recorded team highs in receptions (46) and receiving yards (514) while adding three receiving touchdowns over 471 snaps in 10 games (all starts) … voted as a permanent team captain … made Clemson’s first catch of the season in his first game action in exactly 600 days, recording four catches for 26 yards vs. No. 5 Georgia … recorded a team-high 52 receiving yards on three catches vs. SC State, scoring his 18th career touchdown reception (and first since the 2019 ACC Championship Game) on an 11-yard pass in the first quarter … led Clemson with seven receptions and 61 yards vs. Georgia Tech … exceeded 2,000 career receiving yards on a 13-yard fourth-quarter reception against Georgia Tech, becoming the 16th player in school history to reach the milestone … caught eight passes for 77 yards with two touchdowns in earning team offensive player of the week at NC State, his third career multi-touchdown game, and joined DeAndre Hopkins, Sammy Watkins, Tee Higgins, Mike Williams, Aaron Kelly and Deon Cain as the only players in Clemson history with at least 20 career receiving touchdowns … also passed Airese Currie (2,030) and Deon Cain (2,040) in that game at NC State to move into the Top 15 on Clemson’s all-time leaderboard for career receiving yards … registered one catch for 15 yards on the game’s opening play vs. Boston College before exiting the game with an injury … passed Jerry Butler (139 from 1975-78) in career receptions and passed Hunter Renfrow (2,133) and Amari Rodgers (2,144) in career receiving yards in amassing five catches for 51 yards at Syracuse … gained a team-high 59 yards and caught a team-high-tying five passes at No. 23 Pitt … caught five passes for 75 yards, both team highs, vs. Florida State … moved past Derrick Hamilton (2,312) for 10th on Clemson’s leaderboard for career receiving yards with five receptions for 58 yards at Louisville … caught three passes for 40 yards vs. UConn, passing Jerry Butler to tie Deon Cain for the third-longest streak of consecutive games with a reception in school history (37) … missed the final three games of the season with a foot injury.

2018: Recorded 46 receptions for a team-high 1,000 yards with nine touchdowns in 343 snaps over 15 games … his 21.7-yard average per catch was a single-season school record among players with at least 20 receptions … freshman All-America selection by 247Sports … scored a touchdown on a 15-yard catch-and-run in his college debut vs. Furman … recorded his first career 100-yard game against Georgia Southern, gaining 103 yards on three receptions including a 57-yard touchdown … scored a 53-yard touchdown in his lone reception at Georgia Tech, becoming the first Clemson player to catch touchdown passes of 50 yards or more in back-to-back games since Artavis Scott vs. South Carolina and Oklahoma in 2014 … gained 40 yards on three receptions vs. Syracuse … hauled in a 55-yard touchdown pass amidst his five receptions for 74 yards at Wake Forest … became the first Clemson player to score three receiving touchdowns of 50 yards or more in a single season since Scott in 2014 (four) … caught five passes for 75 yards vs. No. 16 NC State … gained 41 yards on one reception at Florida State … caught two passes for 74 yards including a 59-yard bomb for a touchdown from Chase Brice vs. Louisville … gained 19 yards on three receptions at No. 17 Boston College … earned team offensive player of the week honors for his four-catch, 76-yard performance with a touchdown vs. Duke … gained 58 yards on three receptions vs. South Carolina … caught two passes for a team-high 70 yards in ACC Championship Game against Pitt … gained 148 yards on six receptions including second-quarter touchdown grabs of 52 and 42 yards against No. 3 Notre Dame in the Cotton Bowl … his 137 yards in the opening two quarters set a first-half Cotton Bowl record, as did his 24.7-yard average for the game … posted game highs in receptions (six) and receiving yards (153) and caught a 74-yard touchdown in the National Championship Game vs. No. 1 Alabama … earned All-Bowl team honors from both the AP and Rivals after combining for 12 catches, 301 yards and three touchdowns in two College Football Playoff games.

Everybody, this is Justyn.

Justyn, this is everybody.

Before Clemson: No. 15 player in the nation by Rivals, No. 45 player by 247Sports and No. 74 player by ESPN … No. 2 wide receiver in the nation by Rivals, No. 11 wide receiver by ESPN and No. 15 wide receiver by 247Sports … No. 1 player in Alabama by ESPN and Rivals; became the first top-ranked player from Alabama to sign with Clemson, and was just second top-ranked player in Alabama who did not sign with Alabama since 2005 … had 37 receptions for 730 yards and 13 touchdowns as a senior, leading his team to a 12-1 record and the state semifinals … had 14 punt returns for 383 yards and two touchdowns as a senior … AAAAAAA back-of-the-year, first-team all-state and finalist for Mr. Football as a senior … played basketball at Central High School … from the same school as former Tiger Marvin Sims, who was Clemson’s second-leading rusher in 1978 and top rusher in 1979 … coached by Jamey DuBose at Central High School … recruited by Todd Bates and Jeff Scott.

WR Justyn Ross has been selected to run the American flag down the Hill for today's Military Appreciation Day game. His mother, Charay Franklin, has served in the Navy and Alabama National Guard and completed deployments to Afghanistan and Kuwait. pic.twitter.com/WYslJs5hgn