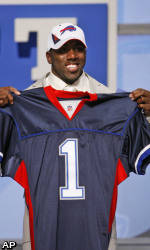 Spiller Taken by Buffalo with #9 Selection of NFL Draft

Clemson, SC – Former Clemson running back C.J. Spiller was selected in the first round of the 75th Annual NFL draft by the Buffalo Bills on Thursday evening. The first-team All-American was the ninth selection of the entire draft.

In an examination of 20 mock drafts on Wednesday by the Clemson SID office, just one had Spiller going to Buffalo (Alan Caplan of Fox Sports). The selection should not have been a total surprise to Spiller because the Bills flew him to Buffalo for a visit in mid-March, just three days prior to the Clemson basketball team’s visit to Buffalo for the NCAA tournament.

Clemson has had five former players play for the Bills over the years, including Butler, who was a starting wide receiver for the franchise from 1979-87. He was the AFC Rookie of the Year with the Bills in 1979 and is still seventh in Bills history in reception yards and 10th in total receptions.

Spiller was a unanimous first-team All-American in 2009 when he led the Tigers to the Atlantic Division championship of the ACC, and a #24 final AP ranking. He rushed for 1212 yards and had 503 receiving yards to go with five kick returns for touchdowns in 2009 when he was named the ACC Player of the Year. He was the only Division I player to score at least one touchdown in every one of his team’s games last year.