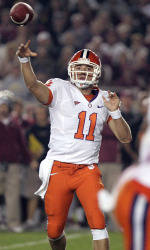 TALLAHASSEE, Fla. (AP) – A week after missing a game-winning kick in the final seconds, Dustin Hopkins booted a career-best 55-yard field goal Saturday night as time expired to give Florida State a 16-13 victory over Clemson.

EJ Manuel, who started in place of an injured Christian Ponder at quarterback, scored Florida State’s only touchdown on an 8-yard run with 10:08 left to give the Seminoles a 13-10 lead.

Xavier Rhodes picked off a Kyle Parker pass in the Seminoles’ end zone to set up the 85-yard, 12-play drive led by Manuel.

Jamie Harper ran for a career high 126 yards and Clemson’s lone touchdown and caught nine passes, a school record for a running back.

Clemson dominated much of the game, but missed two good scoring opportunities in the second half. Catanzaro missed a 38-field goal try in the third quarter and Rhodes’ interception came as a result of receiver DeAndre Hopkins falling on the play.

The Tigers were up 10-3 at halftime, despite dominating Florida State on both sides of the ball. Clemson ran 47 plays to Florida State’s 18 and had the ball for 20:08 to the Seminoles’ 9:52. Florida State managed only three first downs in the first half, just one after its first two plays of the game.

Manuel completed a 53-yard pass to Rodney Smith on his first play and then ran for 16 more on the next to set up a 26-yard field goal by Dustin Hopkins to chop Clemson’s lead to 7-3.

Harper’s 26-yard touchdown run culminated an 82-yard Clemson drive on the opening possession of the game. It was the fifth time this season the Tigers scored on their first drive of a game.

Ponder suffered a ruptured bursa sac near the right elbow in a 24-19 win over Boston College and has steadily received treatment to ease the pain. He missed three practices this week.

At halftime, the Seminoles honored former linebacker Derrick Brooks by retiring his No. 10 jersey. Brooks, who went on to professional stardom with the Tampa Bay Bucs wearing No. 55, played for Florida State from 1991-1994.

Former Seminole baseball star Buster Posey was also saluted by the crowd for his key role in sparking the San Francisco Giants to their first World Series title in 56 years.