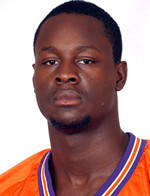 Clemson, SC – Gaines Adams had a pair of sacks and Antonio Clay added 10 tackles to highlight the play for the defense in Clemson’s first scrimmage of the preseason. The Tigers worked for two-and-a-half hours in Clemson Memorial Stadium on Saturday. The team will take a break from practice to hold its annual Fan Appreciation Day at Death Valley on Sunday (3:00 PM to 5:00 PM).

Clemson quarterbacks completed 28 of 43 passes for 301 yards, but the first team defense did not allow a touchdown. Clemson Head Coach Tommy Bowden stopped short of saying that the defense dominated the scrimmage.

“The defense certainly got off to a good start, holding the first team offense to a three-and-out on the first two series, but the offense did take the ball to the five on a 50-yard drive on the third series.” A penalty moved the Tigers away from the goal line, leading to a 40-yard field goal by Jad Dean.

Later in the scrimmage the first-team offense drove to the two-yard line, but the defense made a goal line stand that ended with Michael Hamlin making a strong play at the goal line to keep the offense out of the endzone.

“We moved the ball on offense and our completion percentage was good (28-43 for 65.1 percent). We didn’t get as many big plays. Perhaps Chansi being out today had something to do with that.” First-team All-ACC wide receiver Chansi Stuckey missed the scrimmage because he was going through the Clemson University graduation ceremony across the street in Littlejohn Coliseum.

“This was a starting point, the first stadium scrimmage for this team. Now we will go forward from here.”

First-team quarterback Will Proctor completed 9-15 passes for 75 yards, as he faced the first-team defense on every snap he took. Cullen Harper had a strong day, completing 13-21 passes for 168 yards for a touchdown. His touchdown pass was a 70-yarder to wide receiver Andrew Diomande. Tribble Reese completed 6-7 passes for 58 yards, including a 33-yarder to walk-on Nelson Faerber.

Demerick Chancellor was the top rusher in the scrimmage with 11 rushes for 42 yards and two touchdowns. James Davis had 5-33 for the first-team offense, and added three receptions for 29 yards, while freshman Paul Macko added 11-24 on the ground and scored a touchdown.

“I was impressed with the way C.J. ran in the goal line drill,” said Bowden. “That is something you watch for in that first scrimmage and he showed an ability to get in the endzone.”

The top receiver in terms of receptions was freshman Jacoby Ford, who had 4-60. Diomande led in receiving yards with two receptions for 79 yards, while Aaron Kelly had three catches for 12 yards. In all, 12 different players had receptions in the scrimmage.

Clay led all tacklers with 10, including eight first hits and a sack. He also had a caused fumble. Adams had the two sacks and four total tackles. Chris Clemons had seven tackles, Nick Watkins added six, Courtney Vincent had six, and Dorell Scott had five. Sadat Chambers had the only interception of the day.

Jad Dean made his only field goal attempt, a 40-yarder, while John Early, a walk-on, made a 37-yarder and made each of the three extra points he attempted.

Four offensive linemen missed the scrimmage due to injury. Cory Lambert (back), Thomas Austin (mild concussion), Brandon Pilgrim (leg) and Jamarcus Grant (broken foot), were all in yellow jerseys. There were no new injuries reported during the scrimmage.