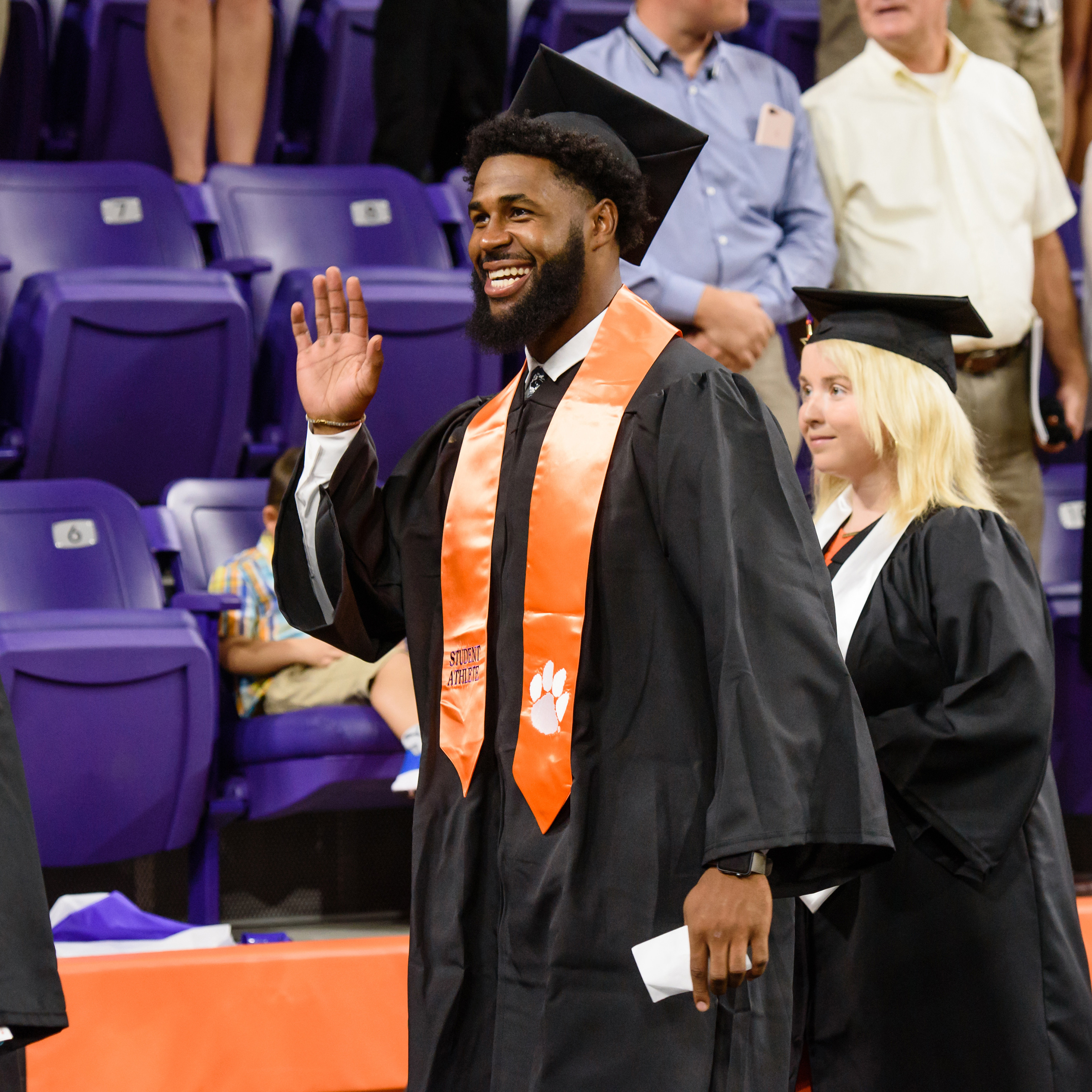 Clemson, S.C.—Clemson starters Justin Falcinelli, Tyrone Crowder and Dorian O’Daniel all graduated from the school during ceremonies at Littlejohn Coliseum on Friday.   All three were excused from practice by Head Coach Dabo Swinney.

“I have always given active players the day off from practice on graduation day,” said Swinney, who has now had 157 of 162 senior lettermen earn their degrees over his nine seasons as head coach. “This is a day they should spend with their families I am proud of all three young men.”

Crowder and Falcinelli are two of Clemson’s five starters on the offensive line. Crowder was a first-team All-ACC selection on the field last year and will be in his third season as a starting guard.

Falcinelli was the backup to All-ACC center Jay Guillermo last year.   The native of Middletown, Md. still has two years of eligibility and plans to begin work on an MBA this fall.   He has played 297 snaps in 24 games over the last two years.

O’Daniel is a Clemson starting linebacker who is already a veteran of 42 games, 13 as a starter.   He had 60 tackles, including 10 tackles for loss last year as a starter.

Clemson will have eight active players with undergraduate degrees on the active roster this fall. The others are cornerbacks Ryan Carter and Marcus Edmond, tight end D.J. Greenlee, offensive lineman Maverick Morris and lineman Patrick Godfrey.

Four former Clemson football players earned degrees on Friday.   Ryan Norton, Eric Mac Lain and Nick Schuessler all earned masters degrees.   Norton was Clemson’s starting center in 2013 and 2014, while Mac Lain was a first-team All-ACC guard in 2015. Schuessler was backup quarterback to Deshaun Watson in 2015 and 2016.   Harom Pringle, who lettered in 1992 and 1993, earned his undergraduate degree through the Tiger Trust Program on Friday.

The Tigers worked in full pads for two and a half hours on Friday afternoon. Most of the practice was indoors as inclement weather went through the Clemson area. Freshman receiver Amari Rodgers returned to practice after missing the last two days with an Achilles strain.

The Tigers will have a stadium scrimmage Saturday morning. It will be closed to the public.   After six consecutive days of practice in full pads, the Tigers will take Sunday off.