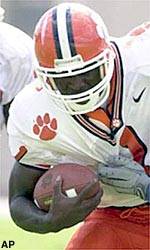 DURHAM, N.C. – It appears Clemson’s only problem remains a good one. The No. 7 Tigers have yet to be challenged in the fourth quarter.

Woodrow Dantzler ran for three touchdowns and threw for another score as the undefeated Tigers beat winless Duke 52-22 on Saturday.

“Mentally, we had a hard time keeping the players’ attention because of the environment,” Clemson coach Tommy Bowden said. “You try to talk around it with your team. But if it affects a 46-year-old I guess it will affect a 19- or 20-year-old.”

The closest game the Tigers have had this season was a 31-10 victory at Virginia last week.

“My mind wonders, I can imagine a 20-year-old,” Bowden said of the blowouts. “We’ve played five games and four were more or less over at the half. That’s a concern. You never know how your team is going to respond until it happens.”

The Tigers have outscored their opponents 238-48, while Duke has dropped 52 of its last 64 games since its last bowl season of 1994.

Once again, Clemson’s first-team defense was super as Duke could go little before scoring two times in the final two minutes on the second team. The Tigers finished with eight sacks and the Blue Devils were only 2-for-15 on third-down conversions.

“No doubt our defense gives us a lot of at-bats,” Bowden said. “We misfired and misfired and then bam, we hit. That’s what happens when the defense plays that good. We’ve got a chance to be competitive in every game when they do that.”

Duke kept it close for awhile, but Clemson scored four TDs in a span of 7:18 in the second quarter to build a 35-0 halftime lead and ran for 315 yards.

The last three scoring drives of the second quarter each came in 46 seconds or less as the nation’s No. 1 offense displayed its quick-strike ability under the elusive Dantzler, the ACC rushing leader who ran for 134 yards and passed for 174 more.

It marked the third straight game Dantzler, who didn’t play in the fourth quarter, has gone over 300 yards of total offense – a Clemson record.

“Yeah, not one of his better games,” Bowden said of Dantzler, who the school began promoting for the Heisman Trophy this week. “It’s probably the worst he’s thrown the deep ball and a few other mistakes he made. A good performance, but I think he’s got more in him.”

While Clemson’s offense continued to cruise, Duke’s was a disaster under D. Bryant, who was making his first start at QB in place of injured Spencer Romine.

A 57-yard interception return by Travis Zachery’s second 1-yard scoring run early in the second and got Clemson rolling. In addition, the inexperienced Bryant was sacked six times in the opening 30 minutes as Duke was held to 42 total yards on 35 plays.

Up 21-0 and already having scored on a 12-yard run, Dantzler made yet another spectacular run that has helped him move into the Heisman Trophy race.

Dantzler faked a pitch and sprinted into the secondary, where he was nearly spun to the ground by defensive back Darryl Scott at the 20. Somehow, Dantzler was able to escape, maintain his balance and race into the end zone in front of a stunned Duke defense.

“I won’t say I’m unstoppable. I will say in the open field – it’s not being arrogant – but I don’t feel I can be tackled one-on-one,” Dantzler said.

“We had him a few times and he ran right through us,” Duke coach Carl Franks said of Dantzler. “At times it looked like a game of flag football.”

Less than two minutes after his spectacular run, Dantzler hit a Morgan Woodward with an 8-yard scoring pass to put the Tigers up by 35.

Dantzler drove the Tigers 93 yards midway through the third quarter on 13 plays, scoring on a 1-yard dive. Dantzler’s rushing yardage on the long march gave him 520 yards on the ground in the last three games – yet another Clemson record by the junior.