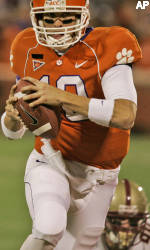 Clemson, S.C. (AP) – Another late deficit, another stunning comeback for Matt Ryan and No. 18 Boston College.

“We practice in these situations a lot and we’ve done a pretty good job of executing,” Ryan said. “It was a great win, exciting, a lot of fun and we’re glad to walk out with the win.”

And a spot in the Atlantic Coast Conference’s title game in two weeks.

“We know we’re there, which is a very good thing,” Ryan said.

As the Hokies discovered last month when Ryan tossed two touchdowns in the final 2:11 to win 14-10, the Eagles (9-2, 5-2) can’t be counted out as long as their senior quarterback has a chance.

“He’s been like that ever since he was a sophomore. He’s always been cool and collected,” Gunnell said, smiling. “It shows in the fourth quarter.”

On BC’s winning drive, Ryan completed a 12-yard pass to Clarence Megwa on third-and-8. Then, facing third-and-7, Ryan lofted a perfect pass to Gunnell, who had slipped behind Clemson’s defense and easily walked in for the go-ahead score.

Ryan had his seventh game with 300 yards or better this season.

Clemson got one final chance and threw a couple of Ryan-like scares into the Eagles. First, Harper threw a long pass that hit Aaron Kelly in the hands before falling away a yard from the end zone.

“The coaches called my number late in the game to try and make a big play and I didn’t come up with it,” Kelly said. “It’s something you dream about and something you really want and it just didn’t work out.”

A little later the Tigers tried a 54-yard field goal by Mark Buchholz that fell well short as time ran out.

Boston College players bounced onto the field, leaping and hugging. The crowd at sold-out Memorial Stadium was silent, stunned that Clemson’s title drought would grow to 16 years.

Ryan added to his own fond memories of Death Valley, considered among the toughest stadiums in the ACC. Two years ago as a backup sophomore, he led Boston College to its first ACC win, 16-13, in overtime here. Now, he’ll always remember advancing to the league’s title game from Memorial Stadium.

Plus, he kept his helmet on the whole time, unlike in 2005 when a crunching hit by ex-Tiger linebacker David Dunham popped it off Ryan.

“It was nice to get hit as hard as I did a couple of years back,” Ryan said. “That was one positive.”

Boston College closes its ACC season next week against Miami, then will face Virginia or Virginia Tech in Jacksonville, Fla., for the ACC crown and the league’s spot in the Bowl Championship Series.

Harper finished 26-for-40 for 226 yards with an interception for Clemson.

Ryan and the offense got plenty of help from their defense, which slowed down a Clemson attack that had averaged nearly 48 points during its past four victories.

The Tigers’ talented tailback tandem of James Davis and C.J. Spiller were held to 62 yards on 23 carries by the top rush defense in the ACC.

“They were able to make us one-dimensional,” Clemson coach Tommy Bowden said.

Clemson got off to a fast start, quickly converting its opening drive into Davis’ 1-yard leap across the goal line for a 7-0 lead.

These teams played down to the wire in both their previous ACC meetings, so it figured this one would be no different.

The closest Clemson came to the end zone in its five subsequent drives was the BC 29, and that ended when Buchholz pushed a 47-yard field attempt left of the goal posts.

Ryan was sacked four times and threw an interception, while Harper missed on five of his final nine passes and took an intentional grounding penalty with Clemson driving.

Harper appeared to have gotten the better of his more well-known rival late in the game. Harper ran right and jumped over two defenders to put Clemson out front 17-13.

That’s been when Ryan is his most dangerous. Despite getting pressured throughout – he was sacked five times by the Tigers – he dropped back and let fly with the long ball to Gunnell that sent the Eagles to the title game.

The Eagles were chasing a national title a few weeks back at 8-0 and No. 2 in the rankings. Losses to Florida State and Maryland ended that dream.

However, with Ryan’s latest comeback, the Eagles hopes of taking the ACC crown in just their third season remain alive.