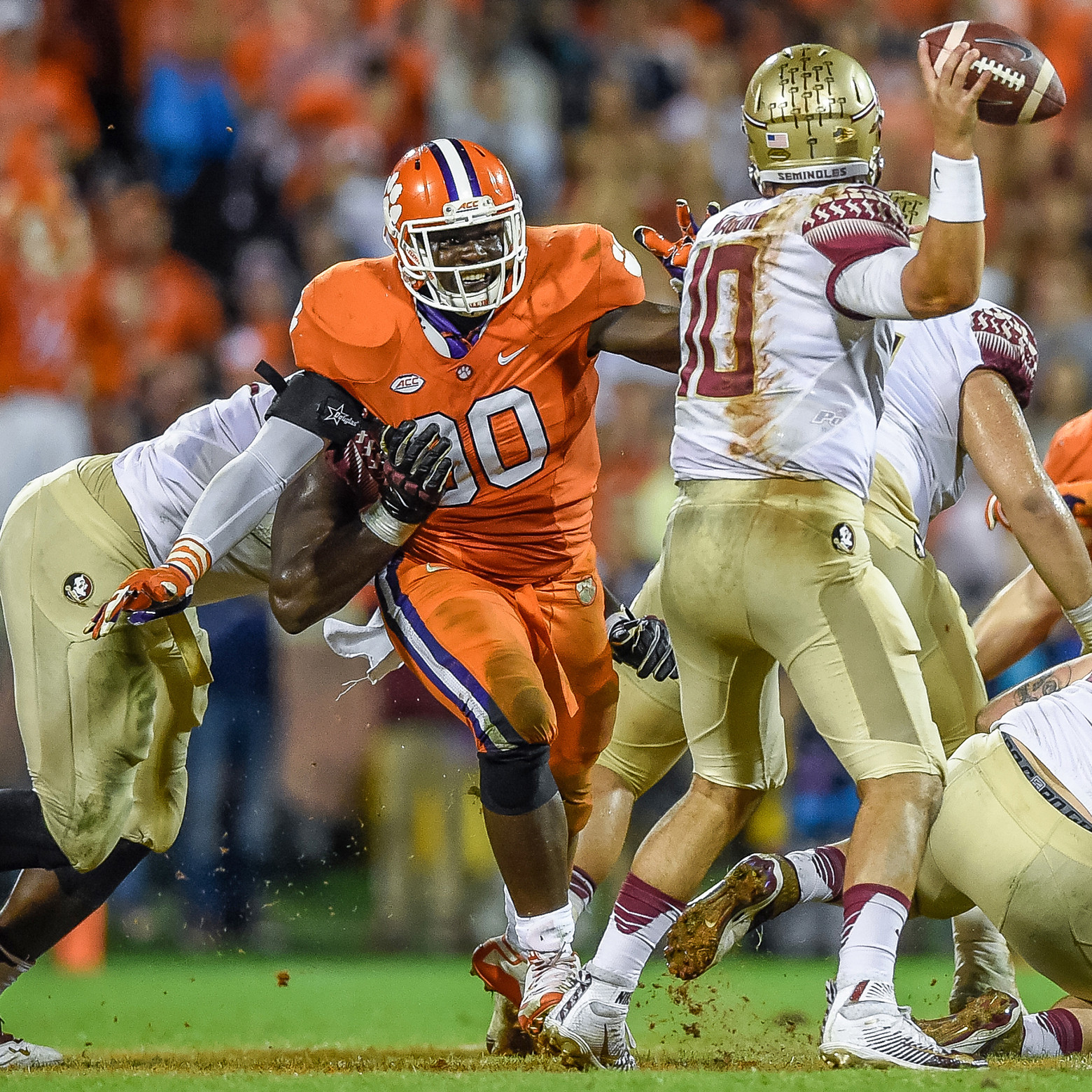 Shaq Lawson came to Clemson with one vision for himself…to make an impact. Since his arrival in 2013, Lawson has done just that.

At the end of this season, Lawson has to make a decision that will change his life…declare early for the NFL draft or stay at Clemson and play his senior season.

Under head coach Dabo Swinney, 114 of 120 football players who stayed for their senior season have gone on to graduate. Swinney monitors his players each season with personal letters about receiving their degrees.

Swinney places a high value on gaining a degree. Whatever decision Lawson makes, he knows where he eventually wants to be.

“I want to go straight to the NFL (after Clemson) and see how that all turns out. I want to have a great career there. After that, I want to be able to give back to the community and work with kids playing football.”

Playing football since the age of nine, Lawson was impacted by many of his coaches and hopes to be that guiding light for kids in the community.

“I want to be a coach for younger kids. That way, I can give them an experience like I had. I want to be able to help them learn what life is all about on and off the football field.”

Lawson came to Clemson from nearby Daniel High School. It has an extensive list of notable football stars, many who have gone on to the NFL.

While Lawson hopes to follow in their footsteps, he knows that part of the reason they are successful is the upbringing they shared.

“Daniel is so special because we all got to grow together. We began in rec league football together. Even when we weren’t playing football, we used to hang out in the backyard with each other.

“I think that helped us a lot because we knew each other and pushed each other to become great players together.”

Though their upbringing helped with their success, Lawson said that their practice regimen prepared them for college.

“Daniel is structured just like Clemson as far as a practice standpoint. We borrowed a lot of our drills from Clemson. That helped me be ready when I came to college.”

Once he arrived at Clemson, Lawson had a couple of coaches that helped shape his game and ready him to take it to the next level.

“Jeff Davis and coach (Marion) Hobby, my position coach, have been helping me a lot. They’ve gotten me ready, technique-wise, and made me a better player.

“I give coach Hobby a lot of credit for that. When I first came here, I was just playing off talent, and now I am using more technique to play this game.”

Besides his technique, Lawson said that Clemson prepared him for life off of the field. A unique part of the Clemson program is its emphasis on “Best is the Standard,” no matter what you are doing. This integral part of the program focuses on being great in the classroom, on the field and as a man.

“Clemson has prepared me in every way possible. They have gotten me ready to be responsible, and I have learned how to manage my time. When you’re at the next level, managing your time is a huge part of the job.”

After losing almost every starter on defense from last season, many believed the new defensive unit would struggle. However, Lawson said this loss taught him another life skill that he can call upon in the future.

“Another important lesson I have learned is to be ready when my time comes. You have to constantly be ready for your opportunity. The great thing about Clemson is they get you ready for that moment.”

When his name has been called this season, Lawson has answered in a huge way. He is among the ACC leaders in tackles for loss, a big reason he was named First-Team All-ACC. He was also a finalist for the Nagurski Trophy, awarded to the nation’s top defensive player, and the Lombardi Award, presented to the top lineman or linebacker.

However, he knows the next level of play will come with an adjustment period.

“The next level of the game is going to be a lot faster. I am going to have to get used to a new system and playing with older guys.

“I think it will be similar to the transition from high school to college. I had to get used to being able to play faster and with a new group of guys.”

His time at Clemson has allowed Lawson to gain valuable experience that has helped him prepare for the day he plays at the next level. However, his grind never stops and he strives to get better each day.

“Every day, I am preparing for the next level. I am preparing to be the best I can be on and off the field. I am taking care of my body a lot more by getting treatments, using the cold tub and eating right.

“Eating right is one of the most important things in the next level because you have to be able to manage your body.”

Having the physical ability to excel at the next level is not enough. To get his mental game ready, Lawson looks to his former teammates, from both Daniel High School and Clemson.

“I talk to a lot of guys at the NFL level like DeAndre Hopkins and Jarvis Jenkins and ask them how the next level is. They’ve told me that the NFL is a business and you have to be ready at all times and make the most of your opportunity.”

Whether or not Lawson chooses to return to Memorial Stadium for another season or use his carefully cultivated technique at the next level, there is one thing he always keeps in mind.