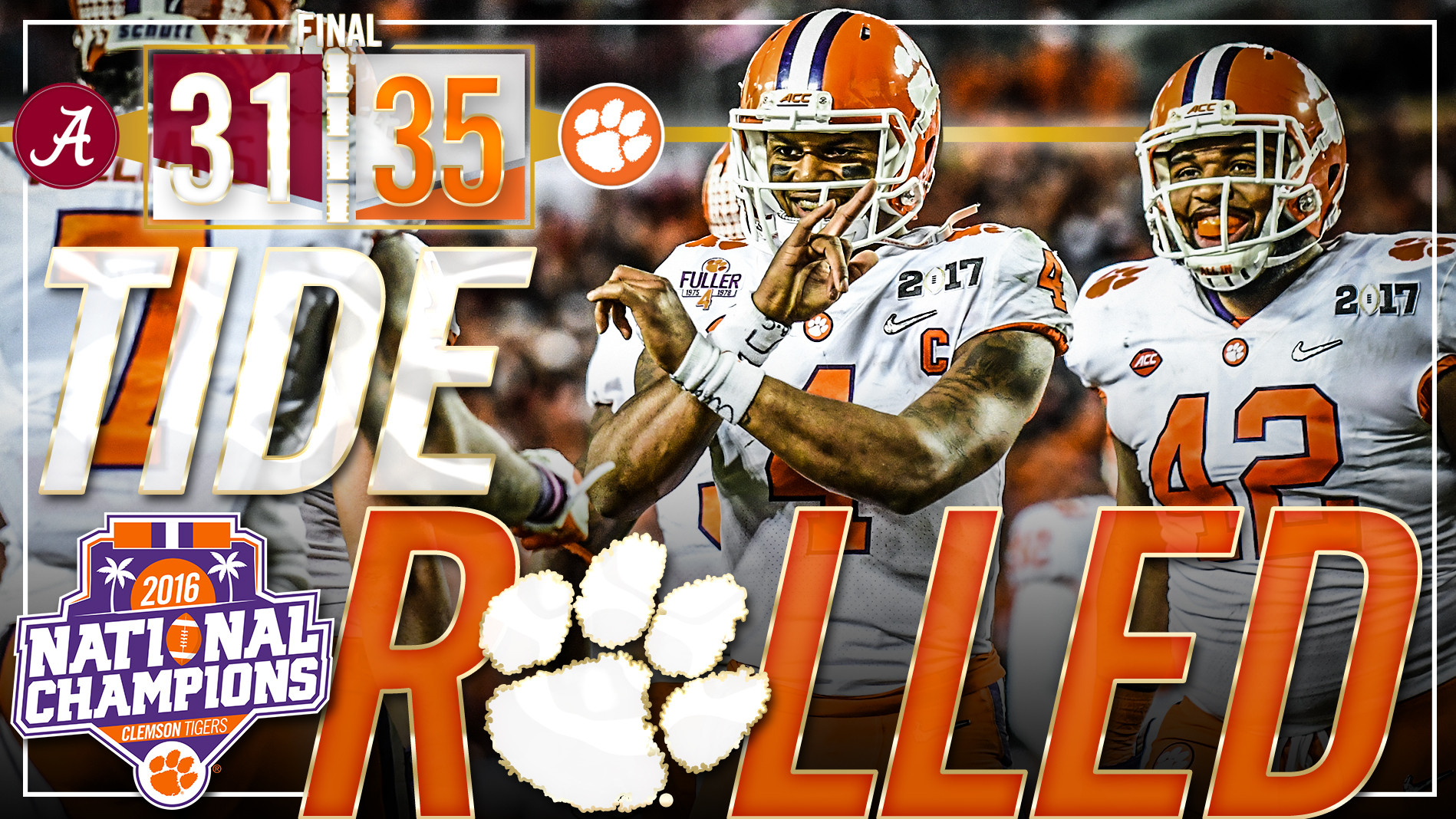 TAMPA, FLA. – Deshaun Watson’s touchdown pass to Hunter Renfrow with one second left sealed one of the greatest National Championship battles in history, with Clemson winning its second crown ever after a 35-31 defeat of No. 1 Alabama. It was the first win in program history over the nation’s top-ranked team.

“The difference in the game was the love we had for each other,” said head coach Dabo Swinney. “This was a blessing, and it’s surreal. Eight years ago, Terry Don Phillips gave me a chance to lead this program. We set out to put Clemson back on top. We came up short last year, but tonight the Clemson flag is flying at the top of that mountain.

Watson was responsible for four touchdowns, including two in the fourth quarter as Clemson rallied from an early 14-0 deficit. It was Clemson’s first win ever in a bowl when trailing by 14 or more points. Watson, named Most Valuable Player, threw for 420 yards and three touchdowns while adding a score on the ground. Renfrow caught two of the touchdowns, giving him a second straight National Championship game with multiple receiving scores. The former walk-on finished with a game-high 10 catches for 92 yards. Jordan Leggett and Mike Williams added 95 and 94 receiving yards, respectively.

The Tigers trailed after the opening quarter for the first time all season. Alabama took a 7-0 lead when Bo Scarbrough raced 25 yards around the left side following an early gamble on fourth-and-1 by the Tigers. The Tide extended its great start to a 14-0 lead when the bruising sophomore back added a second rushing score in the second quarter.

But Clemson answered with a rushing touchdown of its own, courtesy of Watson. The quarterback found Deon Cain for a 43-yard gain to help put Clemson past midfield, then after a key third-down completion to Jordan Leggett, Watson put the Tigers on the board with an eight-yard run.

The Tigers closed to within three at 17-14 after Hunter Renfrow weaved inside after a short reception and collected a 24-yard touchdown pass from Watson. But Alabama answered with its own star from the 2016 National Championship, tight end O.J. Howard. He was wide open after three Tiger defenders covered the flat, leaving him all alone for a 68-yard scoring pass from Jalen Hurts.

The fourth quarter featured a great show by Watson, who was 12-18 for 130 yards in the final 15 minutes. First, he found Williams for an easy score. Then, after running back Wayne Gallman dashed in from a yard out with 4:38 to play, Watson had to be heroic again. Alabama scored with 2:07 on a 30-yard Hurts run, setting the stage for Watson. The key play of the drive was a long pass over the middle to Williams, who made a pair of spectacular catches in the fourth quarter. Then, on second-and-10 inside Alabama territory, Leggett snatched a laser from Watson to put Clemson at first-and-goal. Renfrow scored with a second to play, and Clemson recovered an ensuing onside kick to finish the game.