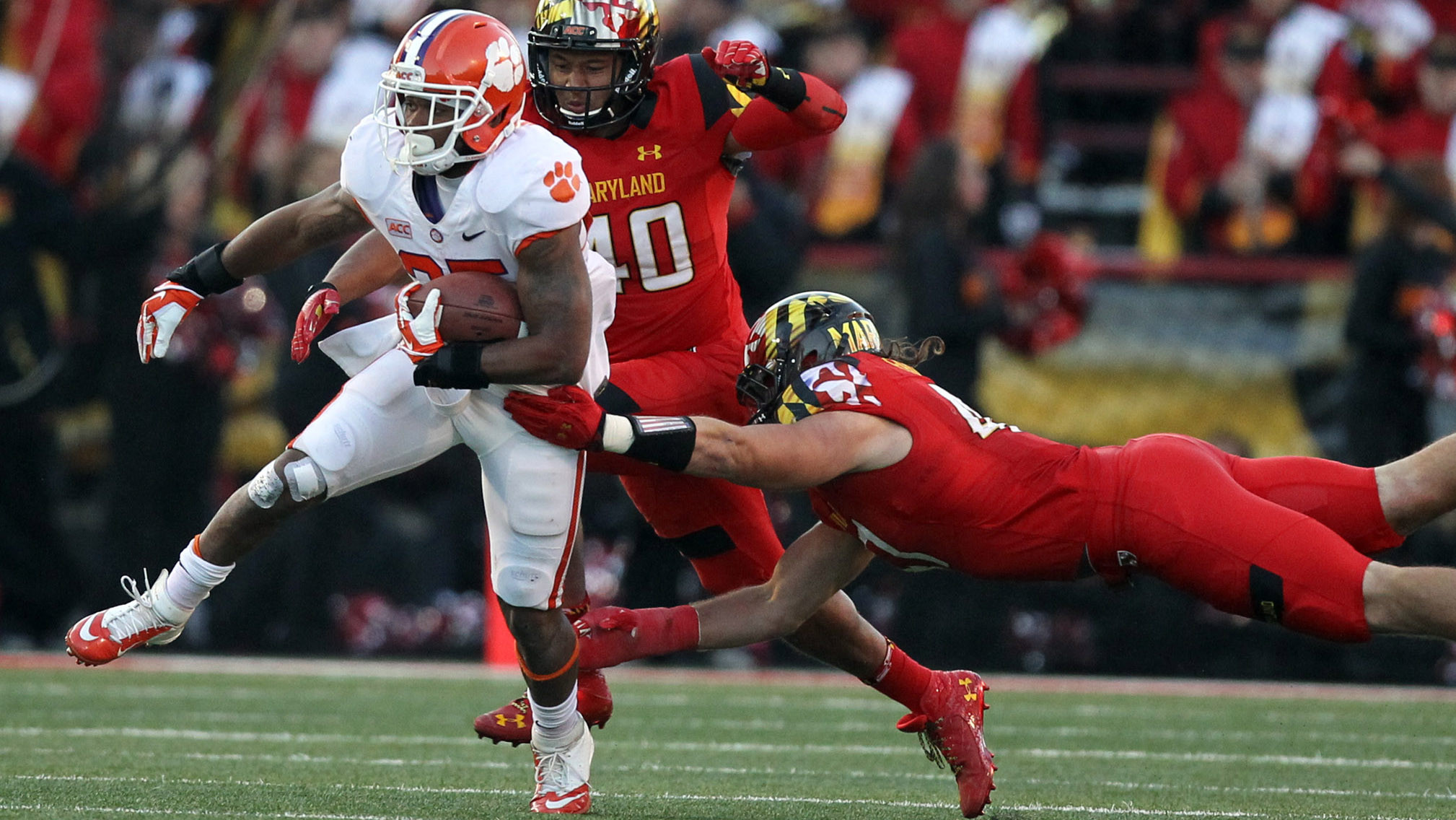 COLLEGE PARK, MD – Roderick McDowell stood outside the Clemson locker room in the crisp night air at Byrd Stadium on Saturday night fielding questions from reporters when fellow running back D.J. Howard walked by, pointed at him and hollered, “Hey, there goes the star.”

Howard was playfully teasing McDowell about the media attention, but he was also speaking the truth.

McDowell carried 30 times for 161 yards and two touchdowns – his first two of the season – as the Tigers beat the Terrapins 40-27 behind a ground game that rolled up 247 yards on 57 carries and controlled the contest.

“We wanted to establish a hard-nosed running game,” McDowell said. “Our mindset is, if we can run the ball on you, it’s going to be a long night. We have wide receivers that can catch the ball, and if our running game’s going good – hey, you’ve got to stop us. So tonight we wanted to play smash-mouth football.”

There was little flashy about Clemson’s win. But then, that was sort of the point.

After head coach Dabo Swinney said during the week that the team was going “back to basics,” the Tigers relied on a stingy defense and methodical approach on offense – by their standards – to rally from an early deficit and wear down the Terps.

Ninth-ranked Clemson (7-1, 5-1 ACC) ran 97 plays on offense, churned out 30 first downs and held the football for 33:07 of the contest, as it moved deliberately downfield on drive after drive.

While that was clearly the game plan, the Tigers’ inability to finish their possessions with touchdowns kept the game interesting much longer than they might have liked.

Clemson had the ball inside the Maryland red zone eight times in the game, but only scored three touchdowns on those drives, as the other five trips inside the Terrapin 20 ended in four Chandler Catanzaro field goals and a punt.

“We probably could have put this game away a lot earlier if we capitalized and did a better job in the red-zone and goal-line package,” Swinney said.

Finally, senior running back McDowell scored two touchdowns in the fourth quarter – the latter a 45-yard jaunt – to kill off the game.

Quarterback Tajh Boyd threw for 304 yards and a score, while Watkins set a school record with 14 receptions on the day and finished with 163 receiving yards.

“What a game,” Swinney said of Watkins. “He was a difference-maker for us tonight.”

While the Tigers eventually pulled away, they did themselves no favors by turning the ball over three times in the game, including fumbles on back-to-back offensive snaps early in the second quarter.

But after those fumbles, both of which came deep in Tiger territory, the defense held Maryland without a first down, and the Terps were only able to trim a 16-7 halftime deficit to 16-13 instead of possibly pulling even or taking the lead.

“We were in bad field position, I think inside of our 30 both times,” senior linebacker Spencer Shuey said, “and to be able to get three-and-outs and hold them to only six points and not let the momentum swing too far was definitely big for us.”

The Tigers had trailed early 7-3 after a 71-yard catch-and-run by Levern Jacobs, but took the lead after two more Catanzaro field goals made it 9-7.

Clemson ventured into the red zone on all five of its possessions in the first half, but didn’t find the end zone until just seconds remained before halftime.

On a second-down play from the Terps’ 5, Boyd lofted a pass into the back of the end zone for tight end Jordan Leggett, who had lined up in the backfield. The 6-foot-6 freshman adjusted well to the ball, turned his body in the air and made a leaping grab to make the halftime score 16-7.

After Maryland trimmed it to 16-13, Catanzaro’s fourth field goal extended the lead to six with 4:23 left in the third quarter.

Still clinging to that lead early in the fourth quarter and the Terrapins in possession, Bashaud Breeland forced an Albert Reid fumble, and Shuey picked up the loose ball and returned it to the Terps’ 22.

Breeland had to sit out the first half of the game because he was ejected for targeting in the second half of last week’s game against Florida State. But when he came on, he certainly made an impact.

“He had to sit inside like a criminal or something for the first half,” Swinney said. “And then we got him ready to go. He sat out the first series of the second half, but then we got him in there – and he was huge.”

Boyd was intercepted in the fourth quarter to set Maryland up at the Clemson 31, but the Tiger defense forced the Terps to go 11 yards backwards, and ultimately, turn the ball over on downs.

On the ensuing drive, Clemson marched 58 yards and McDowell powered his way into the end zone to make the score 33-13 with 7:57 remaining.

Maryland added a touchdown to make it 33-20, but then McDowell broke free on the Tigers’ next drive for a 45-yard touchdown that gave Clemson its biggest lead of the game and put the game away, for all intents and purposes.

“We wanted to take some pressure off Tajh, to get him to play loose, play comfortable and to get him into a groove,” Morris said. “That was a theme all week. We were going to take just about everything off of him, as much as we could, and let him go play. With that, we stressed to our guys, ‘If we do this, we’re going to need to run the football.’ We’re going to have to be physical at the point of attack, and those guys did a good job of that.”

The stands were nearly empty except for a sizeable Clemson contingent in the lower corner by the time Swinney and Maryland counterpart Randy Edsall met at midfield and shook hands after the game.

And so ended one of the great rivalry series in Atlantic Coast Conference history.

The schools have been members of the ACC since its inception and have met on the gridiron every year since 1952, making it the longest continuous rivalry for both schools. That streak will end next season, when Maryland moves to the Big 10.

“It’s never easy up here,” Swinney said. “We won’t have to come up here for awhile. I don’t know when the next time will be, but this has been a tough place for Clemson for a long time. We knew it was going to be a four-quarter game, and it was.”