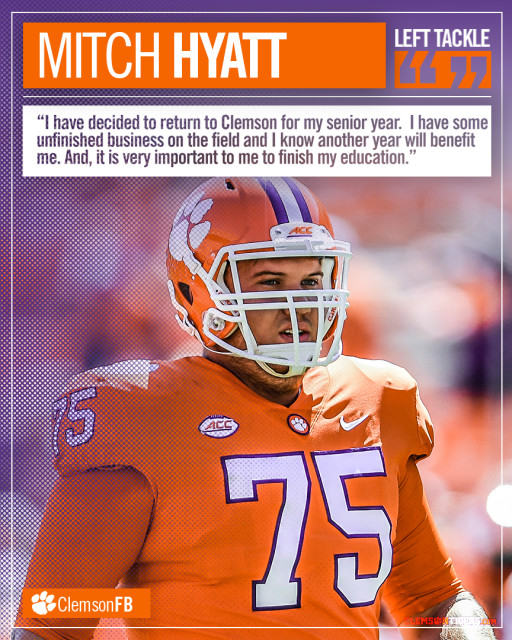 Hyatt to Return for Senior Year

Clemson, S.C.—Clemson first-team All-American left tackle Mitch Hyatt has decided to return to the school for his senior year. Hyatt has been a starter each of the last three years when Clemson has won three ACC titles, made three college football playoff appearances, had three top four finishes in the Associated Press poll, and won the 2016 National Championship.

“I have decided to return to Clemson for my senior year,” said Hyatt. “I have some unfinished business on the field and I know another year will benefit me. And, it is very important to me to finish my education.”

This year Hyatt was the recipient of the ACC Jacobs Blocking Trophy, an honor presented to the top offensive lineman in the ACC as voted on by the league defensive coaches. He was the first Clemson player to win the honor since 1987.

Hyatt was named a first-team All-American by the Sporting News and ESPN and was a second-team selection by USA Today, the American Football Coaches Association, Associated Press, the Football Writers Association and the Walter Camp Foundation.

Hyatt has started 42 games at right tackle over the last three years and played in 43. The Tigers are 39-4 in those games.