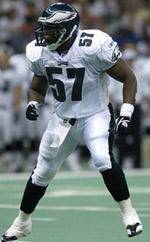 It takes many different positions to comprise a football team. The most visible ones get all the glory, from quarterbacks to receivers to linebackers. But a good team also needs unsung role players who do the dirty work with little recognition. Former Tiger Keith Adams knows what its like to be both.

After a three-year career that saw him shatter records and opposing backfields, Adams is now a part of the NFL’s Philadelphia Eagles. But he is not the star linebacker he was at Clemson. Instead, he is one of the team’s most valuable special teams players at the blue collar position of wedge buster. So what is a wedge buster?

It is Adams’ job to ruin the opposing team’s kick return game. He sprints downfield, lowers his shoulder, and tries to do what makes fans cringe and physics professors shake their heads. He tries to plow through something three times as big as he is. But for the gritty Tiger great, it doesn’t matter how he gets on the field.

“My individual goal is just to do whatever it takes to help my team win the game,” he said. “That’s what they brought me in here for, to be a leader on special teams. If I get a chance to go in on defense, I will be prepared and try to play like I’m capable of playing. It’s a great experience just having the opportunity to play in the NFL. I grew up always wanting to be in the NFL and I am just blessed.”

The son of former NFL player Julius, Adams seemed destined to follow his father’s footsteps after arriving at Clemson. He terrorized quarterbacks in scrimmages as a freshman, and then did the same thing to opponents his sophomore year. He became the most decorated sophomore in Clemson history after he led the nation and set Clemson records with 186 tackles and 35 tackles-for loss. He also set the single-game tackle mark with 27 against rival South Carolina in 1999.

Following his junior campaign, Adams entered the 2001 NFL Draft and was taken in the seventh round by the Tennessee Titans. He learned the business of being a professional early when he was one of the last players cut in training camp that fall. Adams would not let his dream of playing in the NFL die, however.

“I had confidence in myself,” he said. “I knew there were certain things I couldn’t control, and I could only worry about the things I can. I had to keep striving and looking forward and never look back. That’s one mindset I always have. If I make a decision, I just keep going forward and don’t look back.”

He Helped lead Berlin Thunder tof NFL Europe o their 2nd consecutive World Bowl title in the spring of 2002 as he finished 2nd on the team with 55 tackles. He then caught on with the Dallas Cowboys that fall and acquired valuable experience while making five starts at middle linebacker.

“My time in Dallas was great,” said Adams. “It was a great experience for me to really get my feet wet. It really opened up the door for the situation I’m in now.”

He was released by the Cowboys in October of last season but picked up quickly by the Philadelphia Eagles. Adams was excited to move from a rebuilding squad to a Super Bowl contender.

“To be in an organization like the Eagles, the sky’s the limit,” he said. “It was a blessing from God to get this opportunity. Coming from a team that wasn’t winning much to a team with a shot at the Super Bowl is a lifelong dream.”

On Dec. 21, 2002, Adams faced his former team and showed them what they were missing. He forced a fumble on a Dallas kick return and helped the Eagles to a 27-3 win.

“It was nice to have a direct impact and help my team win the game.,” he said. “I just tried to make a play and the opportunity presented itself.”

Adams’ hit wasn’t on just any kick returner. The Cowboy return man had just electrified the nation two weeks earlier with a dazzling return for a touchdown against San Francisco. The kick returner was former Tiger teammate Woodrow Dantzler.

“We could never hit the quarterback in practice,” said Adams. “To get a clean shot on Woody is something that is not really easy to do. He’s a very elusive guy and a great player. The opportunity to get a shot on him felt good. I jawed a little bit and we still joke around about it. He’s doing his thing in Atlanta now and its great to see him doing well.”

Although he has not had any big plays since, Adams’ presence is still being felt on special teams.

“He’s made a dramatic impact on our coverage teams,” said Philadelphia special teams coach John Harbaugh. “Once a game, he hits someone in a wedge, makes them spin around, and go back the other way off the field and he goes through six to eight contact lenses a game. When he hits someone it’s so hard, his contact lenses pop out.”

Of all the wedges he must face in a season, the Atlanta, GA native cites the Chicago Bears as the toughest he must bust.

“The Bears have some big guys on their wedge, they bring it,” he said. “You know if you’re playing against them, you’ve gotta put your hard hat on.”

Adams still keeps a close eye on his alma mater every week. He said the player wearing his old jersey #43 makes him proud. All-America candidate LeRoy Hill has drawn comparisons to Adams as an undersized linebacker who gets the job done.

“I’m very happy to see him doing well. Tell him to keep up the good work and he can definitely make it.”

Hill can only hope to have as good a game today as Adams had against Duke in 1999. Adams notched 14 tackles, four sacks and six tackles for loss as the Tigers drubbed the Blue Devils 58-7 in Death Valley. His day was so incredible that Adams’ teammates lifted him on their shoulders and carried him off the field-at the end of the third quarter.

“I will always remember that game for the rest of my life,” he said. “Just to go out as a team and play like we did that day was unbelievable. Everybody was on the same page and we just played tremendous football. The coaches called the right plays and put us in position. We were just hitting on all cylinders.”

No matter what level of glory he achieves in the NFL, Adams takes joy in being a contributing member of the team. And he will always have fond memories of his alma mater.

“Tell everybody down there at Clemson that my heart is still with them and I still love Clemson. I’m always a Tiger at heart.”