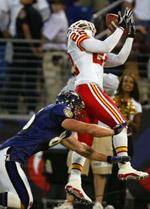 Former Tiger Dexter McCleon has been there before, a solid contributor on one of the league’s best teams. But the sense is that this time around may be sweeter.

“This is the third or fourth time I’ve been on a team that is undefeated through a significant part of the season,” he said. “It’s nice to see the hard work pay off because it’s so hard to go undefeated and even just win in this league.”

After being spurned by the Rams, the cornerback is having perhaps the best season of his career as a member of the 8-0 Kansas City Chiefs. McCleon is an integral part of a revamped defense that leads the league in interceptions and turnovers forced. The unit’s turnaround from last season, in which it ranked last in the NFL, is one of the main reasons Kansas City is undefeated in the first half of the NFL season, the only team to do so.

“In order to get where we want to be this year, it’s going to take all three phases,” said McCleon. “The offense isn’t going to perform like it’s capable of in every game.”

McCleon is definitely doing his share in the defensive phase. He has five interceptions, good enough for fourth in the NFL, to go along with two fumble recoveries, tied for the seventh-most in the NFL. That is seven takeaways in eight games.

His turnovers have not been in garbage time, either. He tied a career-high with two interceptions off Baltimore quarterback Kyle Boller, including one on the Kansas City two-yard line with 36 seconds remaining in the game to seal the 17-10 victory.

He picked off Houston quarterback David Carr in the third quarter and then recovered a fumble on the Texans’ subsequent drive that led to a touchdown and helped the Chiefs turn a close game into a 42-14 win. In front of a national audience on Sunday night, October 26, McCleon recovered a fumble in the first quarter and later added an interception in a 38-5 win over Buffalo. He also had an interception against Oakland quarterback Marques Tuiasosopo in a Monday night game, but his biggest contribution came on the next to last play of the game.

With the Raiders inside the Chiefs’ 20-yard line with under 15 seconds left, Tuiasosopo signaled that he was going to spike the ball and stop the clock. Instead, he tried to pull off the play Dan Marino made famous, faking the spike and throwing the ball to a wide receiver. There was no game-winning touchdown on this play, though, as McCleon nearly intercepted and broke up the pass. The Chiefs held on the following play and held on to their spotless record. Instead of basking in the glow of a well-played game, McCleon said he wanted more.

“That’s another one (interception) I should’ve had,” he said. “I should’ve had two off of Brett Favre, but being that he’s a fellow Mississippi native, I guess I had to let him slide.”

McCleon has been harassing quarterbacks in the NFL for seven years now. After a Clemson career that saw him play quarterback, cornerback, free safety, return man, and outfielder for the baseball team, McCleon was drafted in the second round by the Saint Louis Rams in 1997. He played in every game his rookie year and his contributions gradually increased. He started to peak along with the Rams, who won the Super Bowl in 1999 and made an appearance in 2001. McCleon started 15 games in 1999, led the NFC in interceptions (8) in 2000, and totaled a career-high 78 tackles in 2001.

But his production started to decrease in 2002, and by the end of the year, he was moved to safety. The Rams’ front office felt the Meridian, MS native was not the same player, so he decided to test the free agent waters.

“I felt I wasn’t being treated fairly in Saint Louis,” he said. “They wanted to move me to safety and play as a nickel back, but I knew I was a cornerback and still had the skills to compete in this league.”

As he surveyed his options, Kansas City was not one of them. But fate, along with the badgering of Head Coach Dick Vermeil, brought the two together.

“They weren’t really on my list when I became a free agent,” said McCleon. “Coach Vermeil kind of intercepted me on the way to Minnesota. He was the guy who drafted me with the Rams and believed in me. He kept pressure on my agent and they went from the bottom of the list to the top of the list.”

The move paid off for McCleon thanks to a bit of bad fortune for a teammate. William Bartee was the projected starter at cornerback ahead of McCleon entering the season, but an injury forced him to miss the early part of the season. McCleon capitalized, and the Rams have reaped the benefits.

“When they (Saint Louis) moved him to safety, it was kind of like they gave up on him,” safety Jerome Woods said. “He’s got something to prove. He’s showing Saint Louis he can play corner and he’s doing a darn good job of it.”

So far, McCleon has avoided the injuries that plagued him in 2002. But something else has helped his play this season.

“I don’t think these guys know how much I enjoy being here and how much fun I’m having,” McCleon said. “That was something that’s been missing in Saint Louis the past couple of years. These guys don’t know how much I appreciate that.”

McCleon also enjoys keeping up with his alma mater. He tries to catch games whenever possible and is kept abreast of current events by Assistant Athletic Director John Seketa. McCleon has been known to show up at Clemson events. He went to the 2000 College World Series in Omaha to watch his alma mater. Two years ago, after he won the Super Bowl, he was in town for a Clemson basketball game. While attending the game, he noticed a halftime contestant named Matt Abrams wearing a Rams’ jersey. McCleon grabbed the attention of Abrams after the contest and chatted with him for a few minutes. A few weeks later, Abrams opened his mailbox to find a package from McCleon, including a jersey, pennant, and other goodies.

“I know what kind of person he is,” said Vermeil. “He’s a wonderful, wonderful kid.”

McCleon encouraged the current Tigers to “keep plugging away and working hard because you can do anything you set your mind to if you work hard.” His refusal to accept the move to safety is proof that confidence and hard work will pay off.

“I needed the Chiefs just as much as they needed me,” he said. “I needed to be someplace where I could be back at cornerback. I feel like I’m a player that can do whatever a team wants me to do. Safety was one of those roles where I was filling in, trying to help the team out wherever they needed me. But that’s not my natural position. Maybe one day, when I slow down.”

Read this and many more features in Saturday’s game program