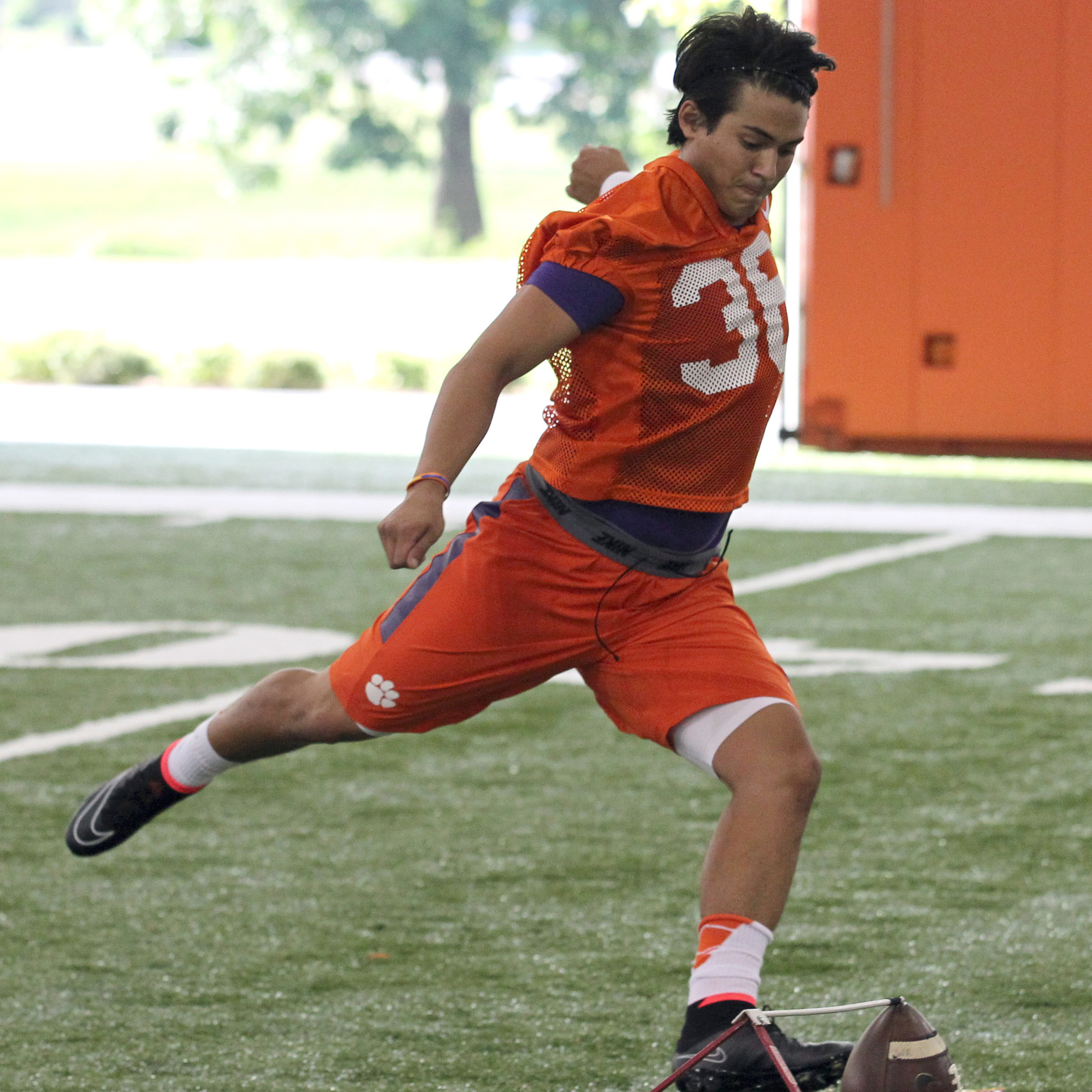 CLEMSON, S.C. — The Tigers practiced for two and a half hours in shells on Tuesday, the final practice before Dabo Swinney’s team dons full gear for the first time Wednesday. Swinney said his team had a good practice on Tuesday, but some players gave in from a mental standpoint at the end.

“We went 55 out of 60 minutes late in the practice with good on good and some guys gave in a little bit,” he said. “But, overall it was a good workout. We have had a good first four days. “We have had a lot of installation on both sides of the ball. It takes a lot of mental toughness. On Wednesday we expect to see some separation. We will have a lot of competition physically. “ Swinney talked about the progress of the running back position after practices.

“I am anxious to see how our backs will compete in some of the drills in full pads. I am not worried about that position. We are as deep as we have been since I became the head coach. We have experienced players who are ready to take the next step. “(Zac) Brooks has had a good camp, (Wayne) Gallman has shown improvement and D.J. Howard has been the leader of the group. And it is amazing to have a player as talented as C.J. Davidson, who basically walked in off the street two years ago.  Kurt Fleming (6-0, 230-pounder) is a different type of runner who will have a role for us.”

Tyshon Dye remains on the sidelines for most of practice recovering from an Achilles tendon injury suffered last spring. Swinney talked about the progress of defensive tackle Carlos Watkins who missed most of last year after suffering multiple injuries in an auto accident.

“Carlos is back to being Carlos,” he said. “He had a great camp last year and started against Georgia in the opener. He looks great. He is going to benefit by redshirting last season.” Replacing All-ACC kicker Chandler Catanzaro, Clemson’s all-time leading scorer, has been a major concern for Swinney in the offseason. Ammon Lakip is a returning letterman and had a good day on Tuesday. He ended the practice by making a 55-yard field goal.

“Lakip had a good day today. He had an off day yesterday, but he responded today. We put him in some pressure situations and he did well.” News & Notes• Seth Ryan was at practice on Tuesday one day after suffering a broken collarbone while making a diving catch in the endzone of the indoor practice facility. The son of New York Jets head coach Rex Ryan had his left shoulder in a sling and will be out of action for at least a month. Ryan is a wide receiver and holder. • Stanton Seckinger suffered an ankle injury on Monday during practice and watched from the sidelines on Tuesday with his foot in a boot. Swinney said the injury is not serious. Seckinger caught the winning touchdown pass against fifth-ranked Georgia in the 2013 season opener and the winning touchdown pass against sixth-ranked Ohio State in the season finale. • Dabo Swinney is ranked sixth in the nation when it comes to a school’s return on its investment according to Forbes Magazine in a release made public on Sunday afternoon. The publication ranked college coaches, ”Not just based on the number of wins and losses alone, but the strength of those wins, as well as how much a coach wins and loses as compared to his salary and the total resources he has.” The data was considered for the last two years combined. Swinney and the Tigers are 22-4 overall, 14-2 in the ACC in that time. The Tigers have finished in the top 10 in the nation in the USA Today poll each of the last two years and have recorded three wins over top-10 teams, including wins over LSU and Ohio State to conclude each of the last two seasons. • Vic Beasley was honored again Tuesday, as he was one of 31 defensive ends named to the Ted Hendricks Award Watch List. Beasley was one of six finalists for the award last year. Beasley is one of four players on the list from the ACC this year. He is joined by Eli Harold of Virginia, Lorenzo Mauldin of Louisville and Mario Edwards of Florida State.

[View the story “Fall Practice No. 4” on Storify]