The identification and development of strength is not a foreign concept for a football program that has produced multiple strength and conditioning All-Americans every year since the turn of the century. But aside from the squat racks and barbells at the Allen N. Reeves Football Complex that help develop functional strength for use on the football field, Clemson has set about identifying and developing strengths in its student-athletes that can guide them throughout their personal and professional lives.

In February, Clemson welcomed John Gregory Vincent and Deb Fortin of The Submarine Way to conduct the “StrengthsFinder” assessment with the team and then analyze the results in a series of workshops. The assessment and review helps participants discover their natural gifts, develop those talents and assess customized results to focus on “what’s strong, not wrong.”

“Oftentimes in life, you think about the guy that makes three A’s and a C, and most people talk about the C,” said Jeff Davis, Clemson’s Assistant Athletic Director of Football Player Relations. “But the fact of the matter is the three A’s are something that will give them the strength to deal with the one C. We want our young men to recognize that, yes, you have weaknesses, but we wake up every morning for the things that we do well.”

Among the participants was sophomore quarterback and P.A.W. Journey ambassador Trevor Lawrence. While many of Lawrence’s strengths and personality traits were on display to millions worldwide as he became the first true freshman since 1985 to lead an FBS program to a national championship, the assessment provided him additional clarity and insight on foundational strengths upon which he can draw in all elements of his life.

“They talked about highlighting your strengths and really nourishing those,” said Lawrence, who cited “Belief” among the numerous strengths listed in his results.

Like other participants, Lawrence’s interest in the session provides a glimpse into a holistic approach to personal growth that isn’t limited to on-field performance. While many outside observers have focused squarely on the strengths of Lawrence and his teammates as they potentially project to the next phase of their football careers, he has utilized the opportunity to better himself in the short term and in the long term in all phases of his life beyond simply how he is defined within Memorial Stadium’s white lines.

“It’s really cool to be part of a program that really tries to nourish every part of who you are, not just use you for what you do on the field but instead tries to make you as good of a person as you can be in every aspect,” Lawrence said. “It all translates [to football], but I think it’s just for life, too.” 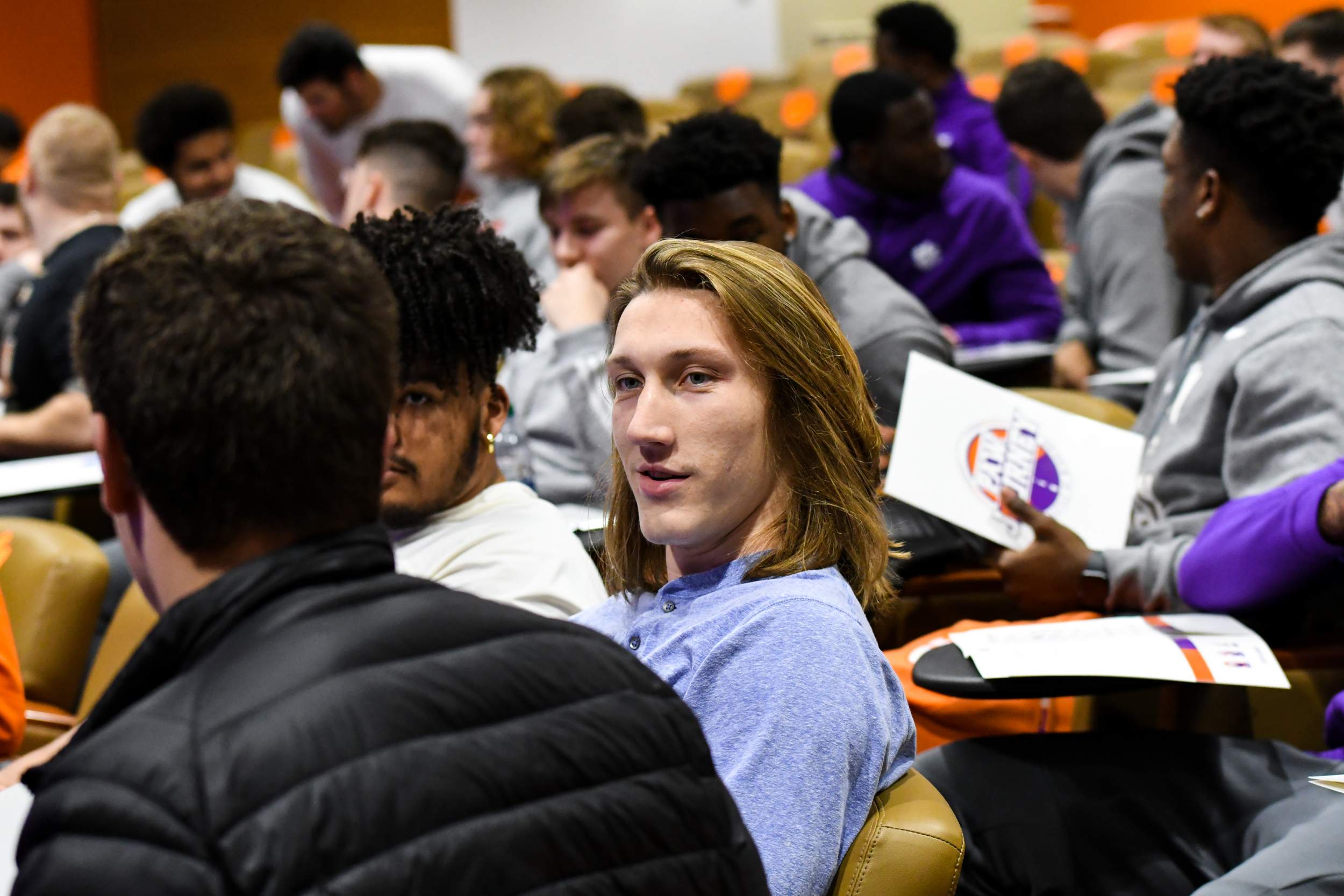 That sentiment was shared by senior offensive tackle and P.A.W. Journey ambassador Tremayne Anchrum, who was among those who walked away from the session with additional insight on individual strengths that can drive  success. Among the strengths listed on Anchrum’s results were “Restorative” and “Discipline.”

“I learned a little bit more about myself,” Anchrum said. “Understanding in what situations I shine the brightest — when do my strengths work, when do they not work, how can I leverage them to be excellent in what I do, whether that’s teamwork on the field, being disciplined in the classroom or being restorative with friends and family, any kind of relationship because that’s what life really comes down to. I hope to really just leverage that skill to help me get along in life.” 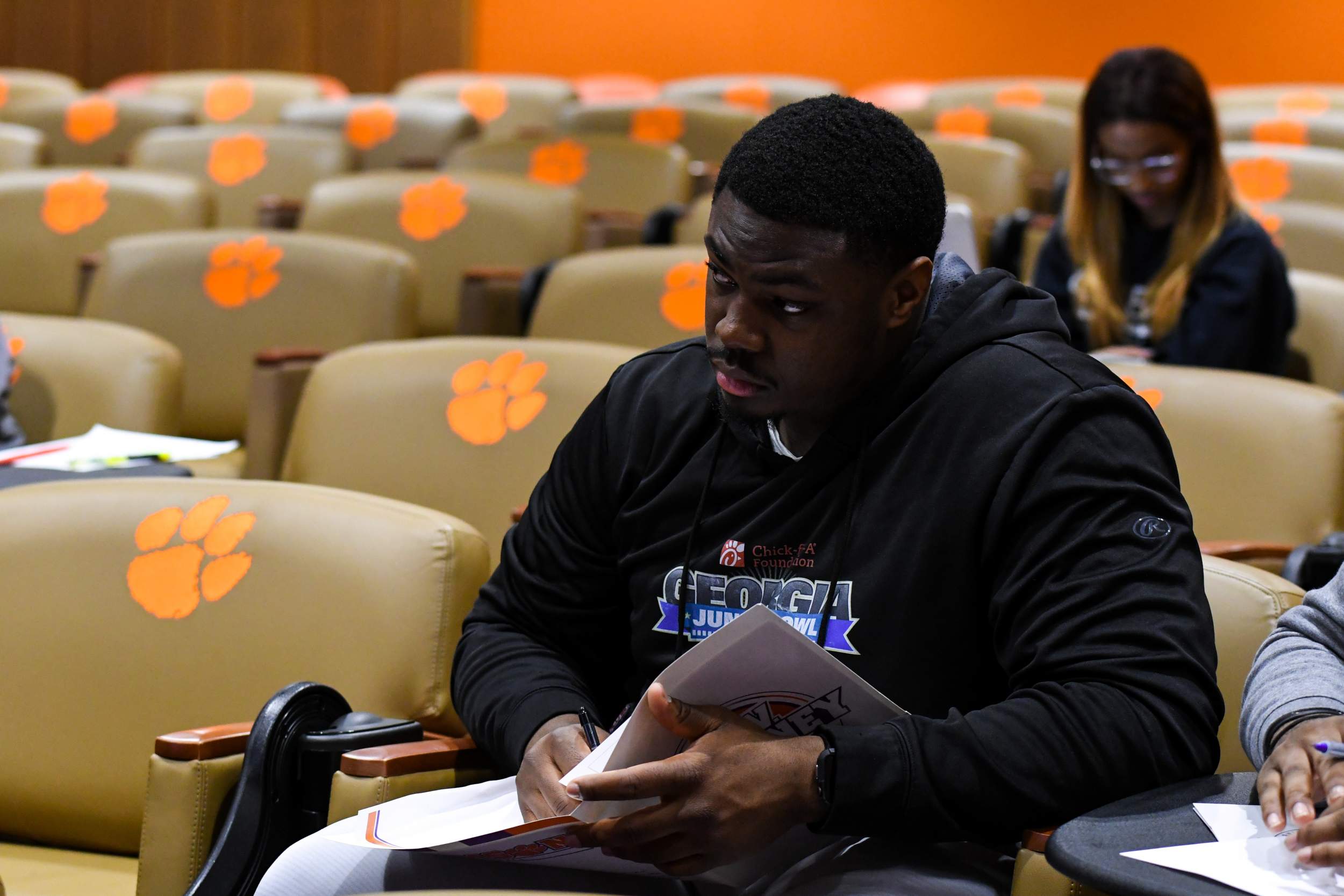 Davis noted that many of the players intended to feature the results on résumés and reference them in upcoming interviews for microinternships.

“We want people to know that our young men are life-ready when they’re finished with their experience in college and they’re ready to continue to compete at a high level,” Davis said.

The student-athletes’ professional application of that knowledge and their engagement with the results encouraged Davis, who has sought to make such initiatives a staple of P.A.W. Journey.

“Our guys came out of there understanding no matter what their weaknesses may be, there’s enough good about them that they need to focus on, that gives them hope to continue to move forward and to accomplish great things in life,” Davis said. “I feel like their engagement was tremendous and I felt like their engagement went beyond just the session, and that’s the type of programming that we want to provide.”