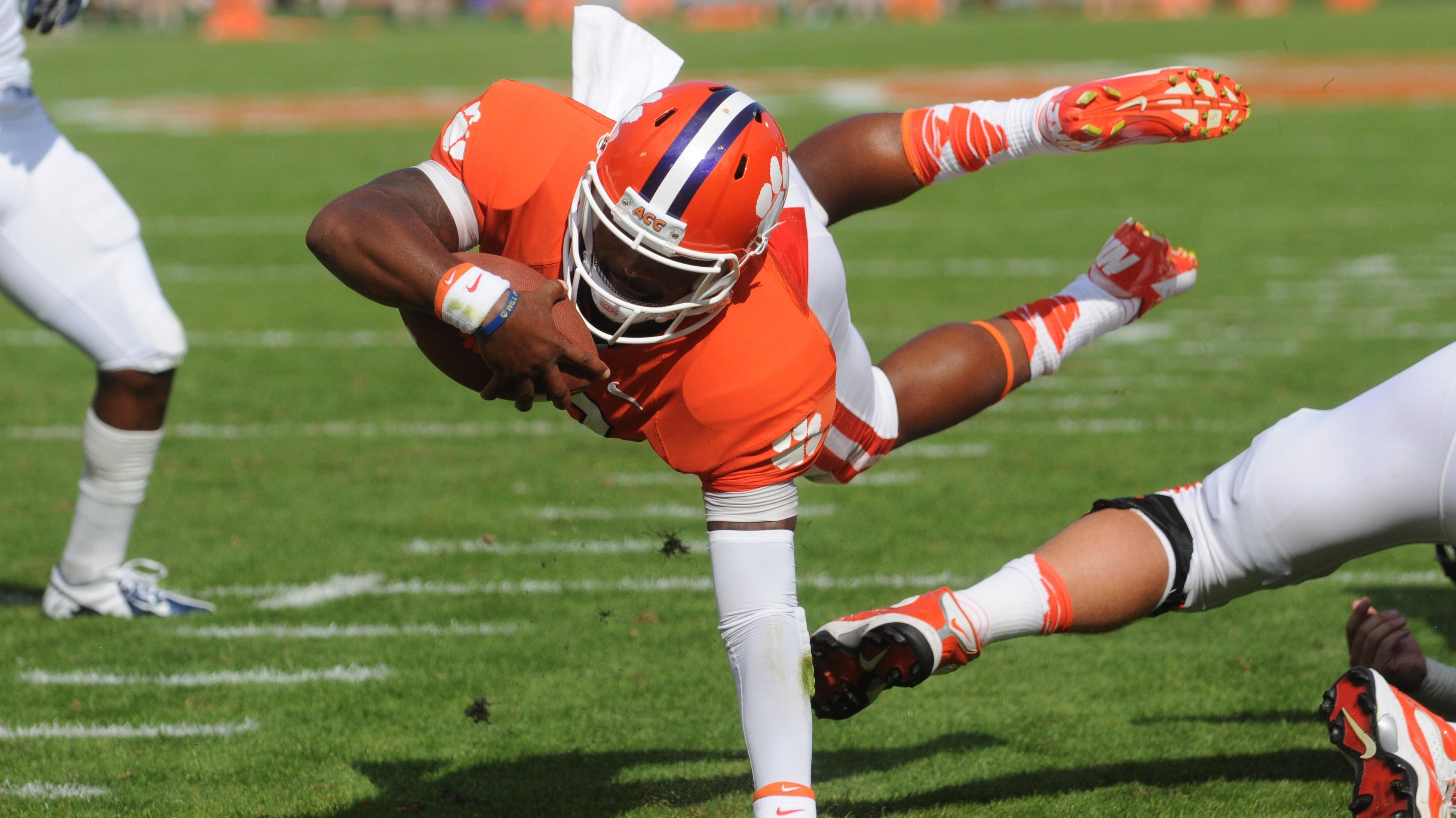 EXCLUSIVE: Tigers Have Chance to Make History against Georgia

CLEMSON, SC – As if there wasn’t enough on the line, Clemson could make college football history against No. 5 Georgia on Saturday night.

Having beaten No. 7 LSU in the Chick-fil-A Bowl to close the 2012 season, the Tigers will become the first non-Southeastern Conference team ever to defeat top-10 SEC teams in consecutive games if they can beat the Bulldogs.

Of course, head coach Dabo Swinney knows that will be easier said than done.

“Openers are always tough,” he said Tuesday during his news conference to preview the game. “It doesn’t matter who you play because there are always unknowns … but it’s even tougher when you open up with a team like Georgia, as talented as they are and as well coached as they are.”

On paper, there seems little to separate the teams.

Both return record-setting senior quarterbacks. Both return a slew of starters on the offensive line. Both feature elite playmakers at the offensive skill positions. Both have new faces and question marks on the defensive side of the ball.

“In games like these, there are only a few plays here and there that make the big differences in the game,” said Clemson quarterback Tajh Boyd, the reigning ACC Player of the Year.

Clemson and Georgia could also hardly be more similar in terms of recent success – both on the field and the recruiting trail.

Georgia has a 28-12 record over the last three years, while Clemson is 27-12. But the Tigers have more quality wins over that span, with seven wins over top-25 teams compared to four for the Bulldogs.

Because of those track records, there will be plenty on the line when the two teams square off in the first meeting of top-10 teams to open a season in Clemson history.

“It would be great to win the game, but we’re just going to check off (our) first goal,” said Swinney, whose team comes in ranked No. 8 in both major polls. “That’s really all it’s going to do. Everybody can talk about that for a couple weeks and how great that is you beat a couple SEC teams and had a big opening-night win. But so what? We’ve got 12 games, and every opponent is critical. We’ve got much bigger goals than an opening game. And that goes for both teams.”

A big reason both teams have such lofty goals is the way they’ve recruited. Over the last four years, Georgia has signed 23 ESPN 150 players, while Clemson has signed 21. The two schools rank 10th and 11th nationally in that regard.

Perhaps the difference between the schools’ totals of ESPN 150 signees comes down to two players who chose one over the other.

Swinney admitted Tuesday he felt the Tigers had a great chance to sign both Todd Gurley and Keith Marshall, the dynamic tailback tandem whom his team will have the unenviable task of trying to contain Saturday night.

“I really loved both of those guys, and I thought we had them both,” Swinney said. “Then when Marshall broke our heart … and woke up and went to Georgia, I just knew we were going to get Gurley.”

Instead, Gurley and Marshall both opted for Georgia, and they combined for 2,144 yards and 25 touchdowns in 2012. Gurley posted the second-best output by a freshman runner in school history – trailing only Herschel Walker – with 1,385 yards and 17 touchdowns.

“I don’t know if we’ve seen any (tandems) like that,” Clemson defensive coordinator Brent Venables said. “They’re pretty good to say the least. They’re big, fast, physical, and Gurley reminds you some of Adrian Peterson in some ways with his strength and physicality. He’s a big, violent runner who runs through trash.”

Venables knows the Tigers can ill afford to focus all their attention on stopping the ground game, however, as Georgia also returns four-year starter Aaron Murray at quarterback.

Murray, who has led the Bulldogs to consecutive SEC East Division titles, was picked by the league’s coaches as the preseason first-team all-conference quarterback, even over 2012 Heisman Trophy winner Johnny Manziel of Texas A&M.

“He’s a good decision-maker,” Venables said. “He gets them in and out of the right plays. They’ve added an element of the no-huddle tempo, as well. The coaches feel very strong about him as far as him being an extension of them. He’s pretty special.”

Of course, Clemson has a pretty special quarterback in its own right in Boyd, who became the first first-team All-American at his position in school history last year after he threw for 36 touchdowns and rushed for 10 more.

Many experts, including Kirk Herbstreit, who will call the game on ABC on Saturday, have suggested the game is likely to be a shootout, but Boyd wasn’t quite ready to make that leap in logic.

“When you step on the field, you have to be ready for whatever it is,” Boyd said. “We are a team, but our job as an offense is to score as many points as it takes to win the game, whether we have to score 10 points or we have to score 30 or 40 points.”