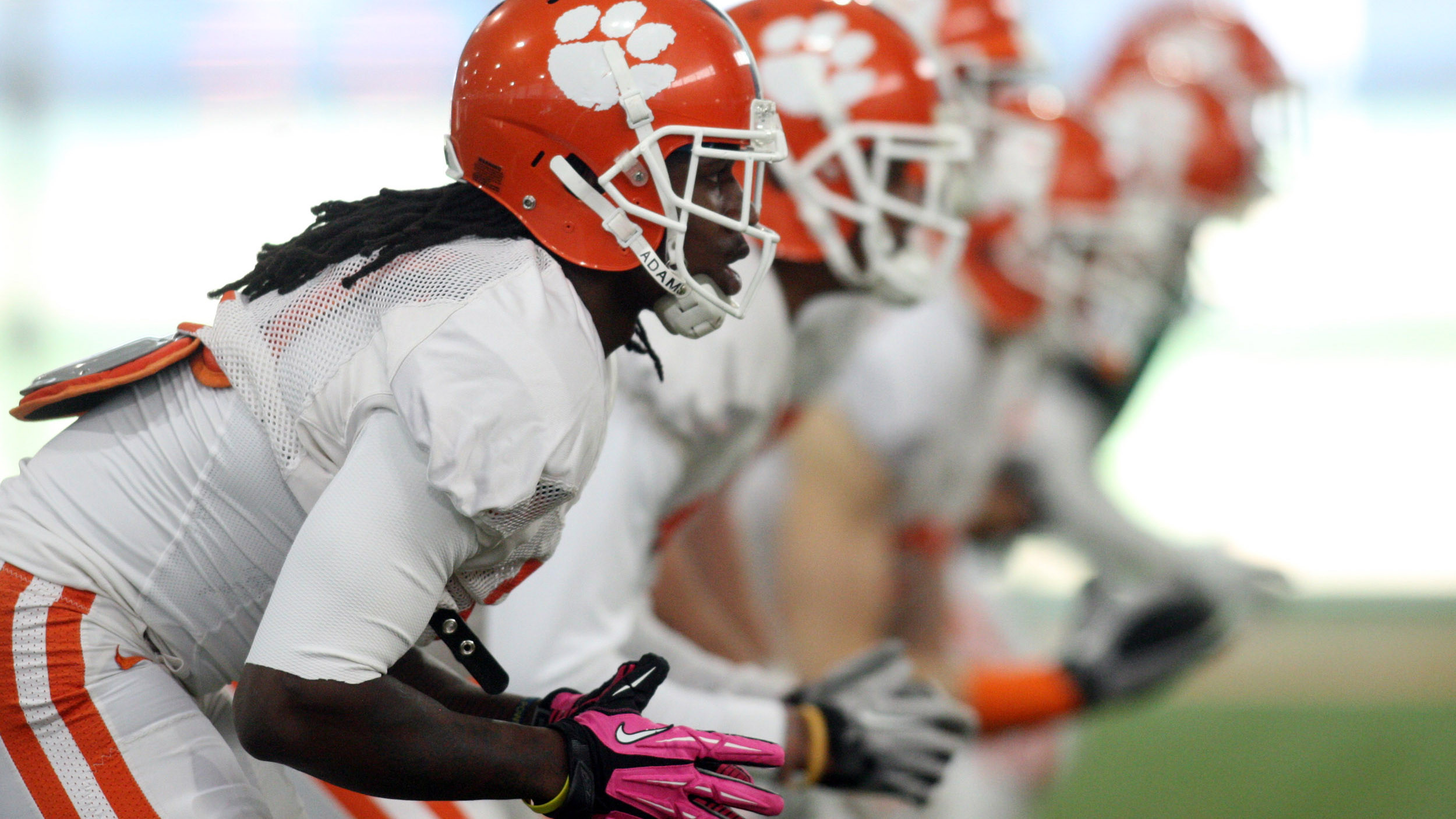 CLEMSON, SC – Sammy Watkins has a new position this spring and a new outlook to go with it.

Watkins, who in 2011 became the first true freshman in ACC history to be named an Associated Press First-Team All-American, is now manning the “9” receiver position in coordinator Chad Morris‘ offense that DeAndre “Nuk” Hopkins played to the tune of 82 catches for 1,405 receiving yards and 18 touchdowns for Clemson last season.

With the move, which will see the rising junior line up as the boundary receiver – the one on the short side of the field – Watkins hopes to not only return to his freshman form, but to surpass it.

“I’m going to get more opportunities at this position to make plays and actually beat the records that I set my freshman year,” he said after practice Thursday. “You get a lot of Cover 1 and press coverage. Defenses can’t really shade the linebacker to my side of the field, whereas in my other position they could shade everything to that side of the field and bracket me.

“I’ve been making a lot of one-on-one catches, running a lot of routes and learning route trees and actually focusing on receiving instead of running around and running speed sweeps all day.”

After he had 82 receptions for 1,219 yards and 12 touchdowns as a freshman – all Clemson rookie records – Watkins started only seven games as a sophomore and finished with 57 catches for 708 yards and just three touchdowns.

While much of Watkins’ decline in production can be blamed on bad luck, he admits he deserved his share of the blame as well.

“I’m way more focused,” he said. “I had a lot of things going on last year. I was just frustrated and not really accepting greatness and trying to hide from everything. But this year I’m welcoming adversity, and I’m just getting prepared for the season and working hard.”

Ultimately, a season beset by nagging injuries came to a frustrating finish last year, as he was hurt on the second play from scrimmage in the Chick-fil-A Bowl and was unable to play further part as his team rallied for a 25-24 win over then-No. 7 LSU.

Perhaps the most memorable moment from that game came on a fourth-and-16 play late in the fourth quarter with the Tigers down to their last down. Quarterback Tajh Boyd was quickly pressured, but stepped up in the pocket and fired a bullet into a microscopic gap in the LSU zone, where Hopkins had broken off his route after sensing his passer was in trouble and made a sliding catch for a crucial first down.

That play is a microcosm of what Morris says will be the key to Watkins’ transition.

“He and Tajh have got to be on the same page,” Morris said. “How many times were there last season where Tajh and Nuk were on the same page? Whether it’s a back-shoulder throw, a throw over the top, a hitch, whatever it may be, all that is just a feel for each other, and you do that through repetition. I’m talking about thousands and thousands of balls being thrown his way this summer.”

The move to boundary receiver makes Watkins the de facto go-to guy in the Tigers’ offense, the way Hopkins was last season when he set school records for receiving yardage and touchdowns.

Morris said the move would also help to keep defenses honest, as they will be forced to keep both safeties deep with Watkins on one side and multiple wideouts lined up opposite him on the field side.

“He provides just a dynamic approach to that boundary,” Morris said. “It’s going to provide guys that aren’t going to be able to play him one on one to that boundary. And when you create a two-high look, you’re able to run the football. It’s going to help your run game out down the road, and you’re still going to get some one-on-one matchups.”

Watkins, who came to Clemson as a unanimous top-50 recruit nationally from Fort Myers, FL, believes not only is he set for an improved season this fall, but the team will be better as well.

Considering the Tigers are coming off their first 11-win season since they won the National Championship in 1981 that may seem like a bold statement. But Watkins knows the onus is on him if they hope to improve on last season’s victory total.

“At this position you have to make plays,” he said. “If the ‘9’ man doesn’t make plays, we don’t win. So it’s a great move for me and for the team. When Tajh and I get to clicking and connecting, I don’t think we can be stopped.”