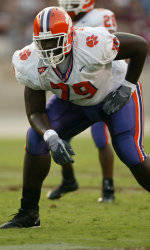 ACC Football Players of the Week

OFFENSIVE BACK Virginia quarterback Marques Hagans went 27-of-36 for 306 yards and two touchdowns in the Cavaliers’ 26-21 win over then-No. 4 Florida State on Saturday. The senior from Hampton, Va., set career highs in yardage, completions and attempts and completed 75 percent of his passes for the fifth time in his career. Hagans also carried the ball five times and helped Virginia average five yards per play.

OFFENSIVE LINE Clemson offensive lineman Barry Richardson graded out at 82 percent on 69 plays in Clemson’s 31-10 victory over NC State on Thursday. The Mount Pleasant, S.C., sophomore also had five knockdown blocks, including an intimidation block, and had the key block on James Davis’ 12-yard touchdown run in the second period that gave the Tigers a 21-0 lead. Richardson helped Clemson gain 489 yards of total offense, its best total in two years, and a season-best 243 yards of rushing offense. Clemson averaged 6.8 yards per play for the game, including six yards per rushing play.

DEFENSIVE LINE Virginia linebacker Kai Parham led the Cavaliers with nine tackles, four of which were solo stops, in UVa’s 26-21 win over Florida State on Saturday. The junior from Virginia Beach, Va., also had two tackles for loss, a sack, a pass break-up and two quarterback hurries. Parham’s sack in the second quarter was his seventh on the season, tying him for sixth-most in one season by a UVa linebacker.

DEFENSIVE BACK Boston College free safety Jamie Silva had 11 total tackles, including nine solo stops, in the Eagles’ 35-30 win over Wake Forest on Saturday. The sophomore from East Providence, R.I., also had one-half of a tackle for loss for one yard and led the team in tackles for the second consecutive week.

SPECIAL TEAMS Virginia placekicker Conner Hughes accounted for 14 points in the Cavaliers’ 26-21 win over Florida State on Saturday, kicking four field goals and adding two extra points. The senior from Williamsburg, Va., had field goals of 35, 37, 45 and a season-long 50 yards on the night as he pushed his career total to 291 points, 14th in ACC history and just two shy of the Virginia school record, set by Gene Mayer from 1912-15. Hughes also matched the Virginia record of 58 career field goals.

ROOKIE Clemson running back James Davis rushed 12 times for 143 yards and two touchdowns despite missing most of the second half with an injury in Clemson’s 31-10 victory at NC State on Thursday. The freshman from Atlanta, Ga., had six different runs of at least 10 yards against NC State’s front line that was ranked best in the nation by many preseason publications. Davis’ total was the fifth-most in Clemson history for a Tiger freshman. He averaged 11.9 yards per carry even though he did not have a run over 30 yards. It marked his second 100-yard game of the year.