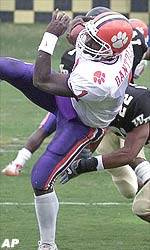 WINSTON-SALEM, N.C. – Woodrow Dantzler rebounded from his worst game of the season, passing for two touchdowns and running for another score in Clemson’s 21-14 victory over Wake Forest on Saturday.

Dantzler, held to 116 yards before being benched in the third quarter during North Carolina’s 38-3 rout over the Tigers last week, had 330 of Clemson’s 391 total yards against Wake Forest.

After a lackluster first half from both teams, Clemson’s defense came up with a big stop to start the second half and Dantlzer fed off of it to ignite the offense.

With the game tied at 7, Wake Forest started the third quarter at its own 47 when Clemson apparently tried an on-side kick to open the half. The ball went out of bounds on the left sideline, giving the Demon Deacons excellent field position.

James MacPherson, playing a full game because the usual rotating quarterback system was scrapped when Anthony Young missed the game with a stress fracture in his foot, moved Wake to the Clemson 25 before the drive stalled.

The Deacons went for it on fourth-and-1, but Fred Staton was stopped short of the first down by Chad Carson to give Clemson the ball.

Dantlzer answered with a sharp 11-play drive, putting the Tigers up 14-7 on a 3-yard touchdown pass to Ben Hall with 6:35 to play in the quarter. It was his second TD pass of the game, the first coming at the end of the first half on a 32-yard strike to Derrick Hamilton.

Dantlzer put Clemson up 21-7 on the first play of the fourth quarter with a 10-yard touchdown run that proved to be all the scoring Clemson needed.

Wake cut it to 21-14 on Stanton’s 1-yard TD run on the Deacons’ next drive, but the bid to tie the game ended when MacPherson was intercepted in the end zone by Kevin Johnson with 2:09 left to play.

Hamilton had six catches for 91 yards, giving him 36 receptions for the season, a Clemson freshman record.

Wake Forest, which came into the game as the ACC’s rushing leader and was ranked sixth in the nation with 235.5 yards a game, gained 193 on the ground. Staton led the attack with 95 yards. Leading rusher Tarence Williams was held to just 37 and left the game in the third quarter with a sprained right ankle.