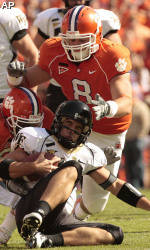 Clemson, SC–Clemson defensive tackle Jamie Cumbie will have surgery to repair a broken left wrist on Monday and will likely miss the rest of the season. The injury was originally sustained in Clemson’s loss to Alabama last Saturday, but Cumbie believed it was just a sprain. He practiced on Tuesday and apparently further injured the wrist.

X-rays were taken on Wednesday, and Thursday it was determined that Cumbie needed surgery. This is the second hand injury for Cumbie this year. He suffered a broken right hand during preseason practice.

Cumbie played 39 snaps against Alabama, and had three tackles. The junior played in 13 games as a sophomore in 2007 and started three games. He finished that season with 29 tackles. Cumbie has not red-shirted previously and would be eligible for an medical red-shirt that would allow him to play in 2009 and 2010. Clemson Head Coach Tommy Bowden announced Thursday that he plans to use freshman Brandon Thompson in Saturday’s game at defensive tackle. Thompson, a native of Thomasville, GA, did not play against Alabama.

Clemson will be without three prominent defensive linemen for Saturday’s game with The Citadel. Senior defensive tackle Rashaad Jackson suffered a knee injury in the preseason and is out until at least midseason.