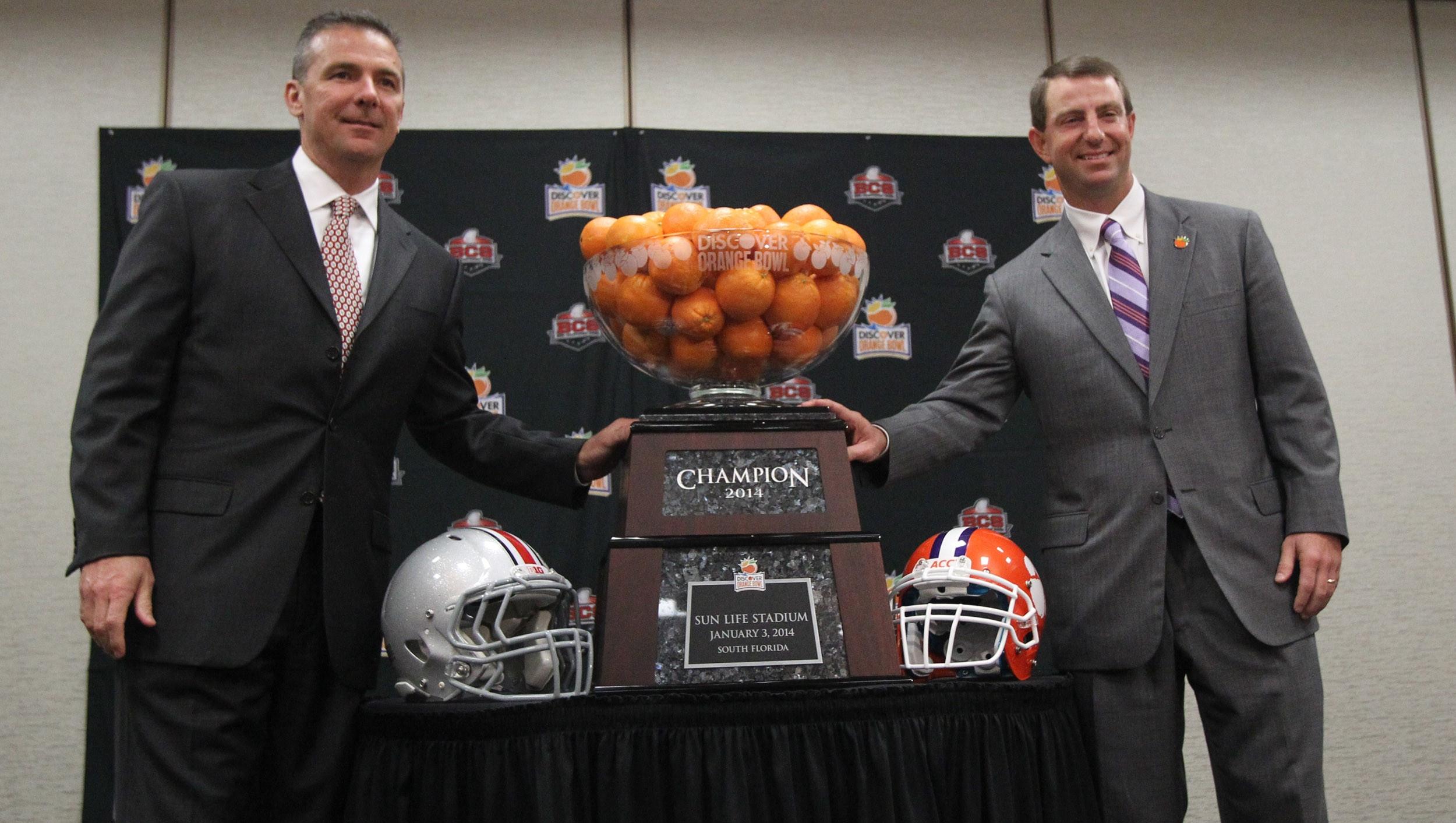 Last week, the Orange Bowl selected Tiger fan Rion Holcombe as Clemson’s Ultimate Fan. After seeing the video Rion submitted in order to earn that distinction, the Tigers wanted to meet him in person, so they invited him to their team meeting on Thursday afternoon at the Fontainbleau Hotel.

Rion and his family got to meet the #Clemson team, Coach Swinney and President Clements: pic.twitter.com/SERXWa4b5y

Invited Rion Holcombe to be our VIP guest today. The team was inspired by his video. Watch: http://t.co/ec1L3jnyaO pic.twitter.com/wSPg3yXZgX

MIAMI, FL – Dabo Swinney and wife Kathleen were in New York City two weeks ago for the College Football Hall of Fame ceremony and took the opportunity to go to “Live with Kelly and Michael,” featuring former NFL star Michael Strahan.

The Swinneys got the chance to meet the New York Giants’ sack master turned TV host after the show, but Dabo wasn’t quite sure if Strahan even knew who he was.

“I’m really honored to meet this guy, and he says, ‘Oh yeah, I text with Tajh (Boyd) all the time,'” Swinney said.

Swinney recounted the tale as part of the Orange Bowl Coaches Luncheon at Jungle Island on Thursday when host Joe Tessitore said he had noticed the way Clemson’s charismatic quarterback worked the room prior to taking the stage.

Boyd also mentioned he has a good relationship with Ohio State’s Braxton Miller – his counterpart in Friday’s Orange Bowl – which is not surprising given Boyd’s famously outgoing persona.

“I’ve developed a really good relationship with him,” Boyd said. “If you want to be the quarterback at Clemson, you have to be the face of the university, so you’ve got to make sure you soak it in and just embrace that.”

Swinney pointed out that it was interesting Shuey and Jarrett were on stage because they also had in common being the last players to receive scholarship offers and join his first two signing classes at Clemson in 2009 and 2010, respectively.

Swinney said he struggled with whether or not to offer Shuey, but is glad he finally decided to pull the trigger.

“This guy is a football player,” Swinney said. “He’s one of those guys who could play in any era of football.”

With 110 stops, Shuey is the Tigers’ second-leading tackler for the second season in a row.

“I feel like to play linebacker and to play defense, you have to have that old-school mentality,” he said. “These days there’s a lot of focus on offense and scoring points, but to me, a football player is somebody who likes the contact and likes to be physical.”

ORANGE BOWL LEGEND Clemson great Terry Kinard was also part of Thursday’s event at Jungle Island, as he was being inducted into the Orange Bowl Hall of Fame for his performance in the Tigers’ 1982 win over Nebraska that brought them their only national title.

The safety was the first Clemson player to be a unanimous All-America pick and was inducted into College Football Hall of Fame in December 2001. Kinard is the fourth Tiger to receive the honor, including his former head coach Danny Ford.

“I know this game is between Ohio State and Clemson, but I’m a Tiger,” Kinard said. “We played back here at the Orange Bowl many, many years ago, and that’s one of my greatest memories as a college football player. The Orange Bowl is a great, great game, and I’m thankful that I had the opportunity to be a part of it. … Go Tigers!”

Larceval, a defensive tackle, battled through meningoencephalitis, a virus that infects and causes swelling in the brain, and missed the team’s bowl game last season.

Although the San Jose State medical staff said he would miss the entire 2013 season, Larceval defied the prognosis and was back with the team at the start of preseason camp in August, and he made nine tackles this season.

Rodriguez received the award in 2012, as he joined the Tigers after being awarded a Purple Heart and Bronze Star for his service in Afghanistan.

Jungle Island, where the event was held, is an interactive zoological park featuring wildlife from all over the world, including Hercules, a 900-pound liger – a cross between a lion and a tiger.

STORY: Forward Progress…Bowl Practice gets Ball Rolling on Season Ahead

FORT LAUDERDALE, FL – Bowl practice isn’t only about finishing one season, it’s also about setting the tone for the next one.

Clemson redshirt freshman quarterback Chad Kelly said head coach Dabo Swinney told him the team’s 15 practices leading up to Friday’s Orange Bowl game against Ohio State would be the most important practices of his career.

VIDEO: A Few Highlights from the 2013 Season

Clemson and Ohio State fans joined forces in a community service project on Thursday morning in support of Feeding South Florida, the largest food bank in Florida, which feeds nearly one million people every year. Members of Tiger Band were among the participants.

A Message to Tiger Fans from Coach Morris

Clemson will host a special Orange Bowl edition of Tiger Calls on Thursday, Jan. 2 from 6 – 7 PM live from the Tigers’ team hotel in Miami. Fans who are in Miami for the game are encouraged to attend the show live at the Fontainebleau Hotel in the Fleur de Lis Ballrooom. Fans can also listen to the show live on the affiliates of the Clemson Tiger Sports Network, on TigerCast on ClemsonTigers.com or on Clemson’s official apps for iPhone, iPad and Android devices.The following affiliates will carry the show:

FORT LAUDERDALE, FL – The questions about the 2012 Orange Bowl have been coming at Dabo Swinney on an endless loop since it was announced his Clemson team would return to the bowl nearly a month ago.

Swinney remembers the Tigers being cast as “the worst team in America” for about eight months after its 70-33 loss to West Virginia in that game.

In the locker room afterward, Swinney told his downcast team, “You grow and learn from everything. It doesn’t always go according to plan for any of us. It’s how you respond to those things.”

The Tigers have gone 21-4 since then.

Swinney spoke at the Head Coaches Press Conference at the Embassy Suites in Fort Lauderdale on Thursday morning, the final time he will meet with the media ahead of Friday night’s Orange Bowl game against Ohio State.

He spent much of his time giving the same answers to the same questions about the 2012 game he’s been asked since the Tigers learned they would return to the bowl.

Swinney hopes his team can finally put those questions to rest tomorrow night.

“Anytime you work really hard for something and you don’t have success, what do we all want to do? If you’re playing pick-up ball and you get whipped, (you say,) ‘Let’s go again right now,'” Swinney said. “Unfortunately when you lose a bowl game, you’ve got to live with it for eight months. And when you play in a BCS bowl game and lose it, you want to get back and have another opportunity.”

’12 OUNCES OF GOLD’Swinney also spoke about the need for the Tigers to take care of football, something they didn’t do well in the 2012 installment when they turned it over four times.

“That ball is 12 ounces of gold, man,” Swinney said. “When you put it on the ground, it affects everything.”

Clemson trailed 21-17 in the second quarter and was on the West Virginia 1-yard line set to take the lead. But a fumble on the goal line was returned 99 yards for a score to reverse the momentum, and the Mountaineers pulled away.

“The biggest thing is, if we could take care of the ball, that’s the one thing you’d change,” Swinney said. “If I could get old Andre Ellington back from the Cardinals and have him squeeze that ball for about six more inches and that ball not go 100 yards the other way – if we did a little better job taking care of it, although we couldn’t really stop them, I think it would have been a little different type of game.”

CLEAN BILL OF HEALTHThe Clemson coach said the team was remarkably healthy going into the contest, as the only player who is battling a new injury is tight end Stanton Seckinger and he doesn’t anticipate him missing the game.

“We’re in pretty good shape. Stanton, I think he’s going to be fine,” Swinney said. “He rolled his ankle, so we’ll see where he is come game time. I expect him to be OK.”

VIDEO: Taylor Watson on the Bus

When Taylor Watson got ready to board the Tigers Orange Bowl bus for the first time in Miami, he saw something he recognized on the side of the bus–his face! Watch his reaction: