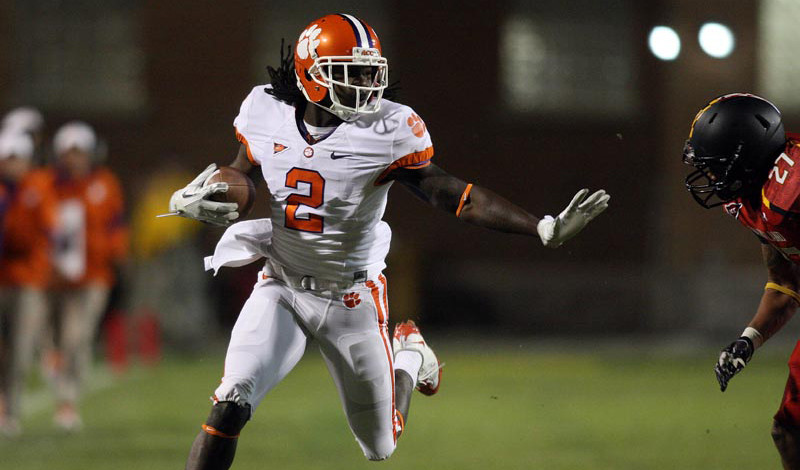 Clemson Has History of Great Return Perfor­mances against Maryland

Last Year vs. MarylandClemson 56, Maryland 45 – at College Park, MDEven though they trailed by 18 points with 11:56 remaining in the third quarter at Maryland, the #8-ranked Clemson Tigers never thought they were going to lose. And when freshman cornerback Bashaud Breeland inter­cepted a pass by C.J. Brown and returned it 29 yards to the Maryland 15, they believed it even more.

“I thought it was the spark,” said Clem­son Head Coach Dabo Swinney. “That is what I told the team. Breeland’s pick was the spark.”

Breeland’s first career interception set up a 13-yard touchdown pass from Tajh Boyd to Sammy Watkins to pull the Tigers within 11 points, and from that point on, Clemson out­scored the Terrapins 39-10 in rallying to a 56-45 victory. The wild comeback, which featured four different Tigers scoring touchdowns, was the second-greatest in school history, bested only by the 1992 team’s 28-point rally at Virginia.

It showed up when most thought it was over. However, Clemson never wavered in its approach, even when a muffed punt by Watkins at his own nine and a 46-yard interception return for a touchdown by Cameron Chism gave Mary­land an early 14-3 lead.

But Clemson kept fighting, as Andre Ellington scored on a three-yard run and DeAn­dre Hopkins caught a six-yard touchdown from Boyd to keep Clemson within striking distance at 28-17. The Tigers kept believing, even when Maryland took the opening drive of the third quarter and scored a touchdown thanks to a 22-yard pass from Brown to tight end Matt Fursten­burg.

Boyd completed 11-12 passes at one point. Overall, he passed for 270 yards and four touchdowns. Boyd finished the night 26-38 with two touchdown passes to Watkins, one to Hopkins, and one to Jaron Brown.

The Tigers also stuck with their run­ning game, as they rushed for 306 yards on 42 carries, with Ellington leading the way with 212 yards and two touchdowns, including a 44-yard touchdown run with 3:55 left to seal the win. El­lington was named ACC Offensive Back-of-the-Week for his efforts.

Watkins, who was named ACC Receiver-of-the-Week and ACC Rookie-of-the-Week, made the best of his first-quarter fumble and turned in a night to remember. The first-year freshman broke C.J. Spiller’s school record for all-purpose yards in a game with 345 while also scoring three touchdowns, including an 89-yard kickoff return for a touchdown that gave Clemson a 49-45 lead after Maryland had reclaimed the lead midway through the fourth quarter.

Watkins also had a 70-yard kickoff return in the first quarter that set up Ellington’s first touchdown.