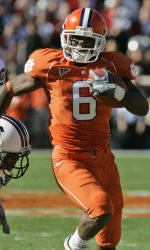 The Gamecocks (7-5) trailed 28-14 after C.J. Spiller’s second touchdown run early in the third quarter and looked like they were about to fall again to Clemson (8-4), as they have so many times in this 104-game series. South Carolina also had dropped its five previous games against ranked Southeastern Conference foes this year.

This time, though, the Gamecocks rallied behind quarterback Blake Mitchell, who shook off three earlier interceptions to lead three scoring drives.

Clemson had a final chance, driving to South Carolina’s 22. But Jad Dean missed a 39-yard field goal left with 13 seconds remaining that would have tied the game. Instead, the Gamecocks celebrated their first victory at Death Valley since 1996.

“You would like to win every year so you don’t have to experience what we’re experiencing right now,” Clemson coach Tommy Bowden said.

The Tigers opened the year 7-1 and got as high as No. 10 in the polls. But they finished by dropping three of their final four games.

The Gamecocks gained 492 yards, surpassing the previous season high of 332 yards Clemson gave up in a loss to Virginia Tech. Cory Boyd rushed for 106 yards and a touchdown for South Carolina. Sidney Rice caught 8 passes for 103 yards.

Mitchell, who was 23-of-36 for 268 yards, has been solid since returning to his starting job at halftime of a 26-20 loss to Arkansas three weeks ago. But he had three interceptions, two which led to Clemson touchdowns in the first half.

Then, after the Tigers stopped South Carolina on fourth-and-2 on the Gamecocks’ first possession of the third quarter, Spiller’s second scoring run upped the lead to two touchdowns.

That’s when Mitchell dug in.

He completed throws of 9 yards to Freddie Brown, 18 yards to Rice and 18 to Davis to reach Clemson’s 1. Davis finished off the series with his first TD.

South Carolina appeared to take the lead less than a minute later when defensive lineman Nathan Pepper picked off Will Proctor and had clear sailing to the end zone. But Pepper, a sophomore, began celebrating before crossing the line and tailback James Davis swept the ball away through the end zone.

The Gamecocks got a favorable replay review on the game-winning drive. One of Mitchell’s throws was ruled a lateral and Clemson’s C.J. Gaddis pounced on it for a turnover. Replays, though, showed it was an incomplete forward pass and South Carolina marched on.

Three plays later, Succop give South Carolina the lead for the first time with 7:51 to go.

Spiller had an 80-yard touchdown run in the opening quarter, his sixth scoring play of 50 yards or better this season. He ran for 155 yards, coming out on the Tigers’ final drive with a sprained ankle.