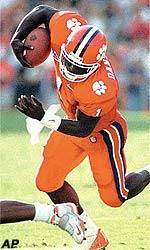 CLEMSON, S.C. – Bryson Spinner and Billy McMullen practice the play all the time. As the final seconds tick off the clock, they rush to the line with the defense expecting them to spike the ball. Instead, McMullen darts right on a fade route.

The play worked just like that Saturday night. McMullen hauled in a 1-yard pass with a second left to give Virginia (2-1) a 26-24 victory over No. 19 Clemson (2-1) in the Atlantic Coast Conference opener for both teams.

Some Tigers appeared to be expecting the spike on third down as Spinner hustled his team to the line of scrimmage with the final seconds ticking away.

“I think we caught them off guard a little bit,” Spinner said.

Clemson cornerback Brian Mance thought he got pushed by McMullen on the winning play. When McMullen was asked after the game if he pushed off, he shook his head and laughed.

Virginia coach Al Groh also shrugged off any talk of a missed call.

“There’s contact on a lot of plays. This is a contact game,” said Groh, who came to the Cavaliers this season from the New York Jets.

Spinner, who started but shared quarterbacking duties with fellow sophomore Matt Schaub, went 15-for-25 for 186 yards, throwing for two touchdowns and running for another score.

“The defense had played good in the last couple of possessions,” Clemson coach Tommy Bowden said. “I thought the momentum had changed.”

But as the Tigers drove to put the game away, quarterback Woody Dantzler fumbled with less than five minutes left.

Virginia (2-1) couldn’t convert on the first drive that started on the Clemson 34. The Tigers couldn’t get a first down on the next drive and a 39-yard punt gave the Cavaliers in good field position for their final drive.

“I carry all the responsibility,” Dantzler said. “If I hadn’t fumbled the ball, they wouldn’t have gotten it back.”

Spinner completed his first two passes in the final drive before running back Tyree Foreman threw a 17-yard pass to McMullen. Virginia then ran the ball twice from inside the 5 before McMullen’s touchdown catch. After a 15-yard celebration penalty, Virginia didn’t risk kicking the extra point.

McMullen had eight catches for 88 yards and two touchdowns. Arlen Harris led the Cavaliers with 73 yards rushing. Schaub, who went 3-for-9 for 41 yards, didn’t play after the second quarter.

Dantzler went 25-for-34 for 251 yards and ran for 67 yards, but had two interceptions and one fumble.

Bowden refused to blame Dantzler, pointing out the Tigers also missed a field goal and dropped a few passes.

“You really can’t pin a loss on one guy or one play,” Bowden said.

Clemson outgained Virginia 431-387 and, even with the Tigers’ no-huddle offense running most of the game, held the ball 10 minutes longer than the Cavaliers.

Derrick Hamilton caught nine passes for 90 yards for the Tigers. Travis Zachary, who has struggled in the first two games, led Clemson with 87 yards rushing.

Clemson led 10-6 at half. But two quick touchdowns – one on a 6-yard run by Spinner, the other on a 14-yard pass from Spinner to McMullen – put Virginia up 20-10 seven minutes into the third quarter.