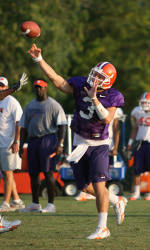 Clemson, SC-LaDonte Harris caught two touchdown passes from Willy Korn to highlight the offense, and Phillip Merling had three tackles for loss, including a pair of sacks to highlight the defense in a two-hour Clemson football scrimmage on Saturday morning. It was the second major scrimmage of the preseason for Tommy Bowden’s Tigers, who are preparing to open their season against Florida State two weeks from Monday.

Harris led all receivers with four catches for 69 yards. The touchdown receptions were four yards and 25 yards in length. “Harris was the offensive player that jumped out at me today,” said Bowden. “We are looking for seniors to step up in terms of leadership and performance on the field and he certainly did today.”

Bowden was pleased with the performance of the quarterbacks, but had some reservations about the running game in short yardage situations and the number of penalties called in the scrimmage. “All three quarterbacks looked good,” said Bowden. “There was a much better tempo today. We worked on some drills this past week to correct that problem.

“We did not run the ball well in short yardage or at the goal line. The defense had the upper hand in that area. The defense certainly had something to do with that. I saw some young guys step up in the line. Phillip Merling was a leader on defense and made some big plays. Overall, we need to become more efficient in short yardage.

“The other area that bothered me was the number of penalties. We jumped off sides or had illegal procedure penalties.”

Clemson’s three quarterbacks were a combined 28-42 for 358 yards with two touchdowns and two interceptions. Harper, Clemson’s number-one quarterback, was 9-15 for 105 yards and an interception. All his action was against the number-one defense. Freshman Willy Korn was 10-15-122 yards and two touchdowns, all against the number-two defense. He also threw a touchdown pass to high school teammate Tribble Reese had the best statistics of the three signal callers, hitting 10-12 for 131 yards.

Walk-on Ronald Watson, Jr was the leading rusher with 7-24. James Davis had just three attempts for five yards. Davis is just back to full strength after missing a couple of practices late in the week due to injury.

Darius Gaither was the top tackler in the scrimmage with six and he also had an interception. Nick Watkins had the other turnover with an interception. Merling had four total tackles, three of which were tackles for loss. He had two sacks for 10 yards. Cortney Vincent had four tackles, including two for losses.

Mark Buchholz had an outstanding day in terms of field goal kicking. Prior to the scrimmage against a live rush, he connected on field goals of 34, 44 and 54 yards. The 54-yarder had five yards to spare. He also kicked a 45-yard field goal in the scrimmage. Jimmy Maners had three punts for a 44-yard average. Richard Jackson had a pair of kickoffs, both went to the goal line.

There were no new injuries on Saturday. Eight players were dressed in yellow jerseys and missed the scrimmage due to injury: Ricky Sapp (sprained ankle), Dorell Scott (sprained ankle), Jamie Cumbie (shoulder), Brandon Maye (foot), Antwon Murchison (concussion) and Josh Miller (oral surgery). Ray Ray McElrathbey was also at the scrimmage, but he is out for the year with a torn ACL.

The Tigers will have Sunday off, then practice on Monday afternoon.