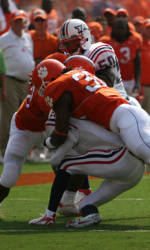 Clemson, SC-Clemson’s five running backs averaged 5.4 yards per rush to highlight the offense and Nick Watkins had five tackles and two pass deflections to highlight the defense in Clemson’s third and final stadium scrimmage on Tuesday morning. The Tigers worked for a little over two hours in Death Valley.

“We wanted to work on the running game, especially with the first team,” said Head Coach Tommy Bowden after the scrimmage that concluded the preseason portion of its schedule. The Tigers open against Florida State on September 3. The Tigers will have Wednesday off, the first day of classes at Clemson, then go back to the practice fields Thursday for specific game planning for the Seminoles.

“I was not pleased with the running game, especially in short yardage on Saturday. But I saw improvement today. There was some good running North and South. You can’t out-run Florida State running East and West. The backs averaged over five yards a rush. I thought the offensive line played better. There were some penalties, but overall they played well.”

Willy Korn had another good scrimmage at quarterback completing 9-16 passes for 134 yards and a touchdown. The touchdown pass was a 56-yarder to wide receiver LaDonte Harris, who continues to have a good preseason. Harris had two catches for 67 yards on the day. In addition to his touchdown pass to Harris, Korn threw a scoring pass to Sadat Chambers during a goal line drille.

First-team quarterback Cullen Harper was 4-12 for 41 yards, all against the number-one defense. The offense scored two touchdowns and a field goal when he was on the field. Tribble Reese, the third-team quarterback, was 3-5 for 25 yards, but had touchdown runs of 70 and two yards. He was the leading rusher in the scrimmage with three rushes for 83 yards. None of the three quarterbacks threw an interception.

Among the running backs, Sadat Chambers had 8-42, Ronald Watson, Jr had 6-45 and Paul Macko had 4-13. Chambers, Macko and Spiller all had touchdown runs. The five running backs had 28 rushes for 151 yards between them.

In addition to Harris, Xavier Dye had three receptions for 29 yards, all from Korn, his former high school teammate at Byrnes High near Spartanburg. Tight end Durell Barry had three catches for 24 yards.

Watkins had five tackles from his first-team linebacker position and also had a pair of pass deflections. He had an interception in last week’s scrimmage. Chris Russell and Jamie Cumbie, Michael Hamlin, Cortney Vincent, Jeremy Campbell and Antwon Murchison all recorded quarterback sacks.

Punter Jimmy Maners had a 64-yard punt coming off the one-yard line. “We had some good performances in the kicking game today,” said Bowden. “I wanted to simulate as much pressure as possible for Buchholz and he made that kick. I was also impressed with Maners punt off the goal line. That is what you want in that situation. Our kickoff return coverage was good also.”