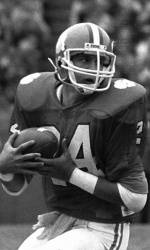 On page 14 of the 1982 Orange Bowl program, The Greenville News writer Chris Smith, who had covered Clemson the entire season, did a short preview on the Tiger special teams. Head Coach Danny Ford had the following to say about Billy Davis.

“He is not the fastest and does not have the best moves, but he is reliable.”

Those 16 words may not sound like a resounding endorsement, but what Davis did that steamy evening in Miami and what he has done in the 30 years following gives us a clear idea of what Ford meant.

A native of Alexandria, VA, Davis was a two-sport letterwinner for the Tigers, playing for both Ford on the gridiron and another Clemson legend, Bill Wilhelm, on the diamond. But if you ask any Clemson fan who followed that 1981 season, all will have one particular memory of Davis and his value as a “reliable” punt returner.

In the third quarter against #4 Nebraska in the Orange Bowl, Davis returned a punt 47 yards to put Clemson in position for a field goal that would provide the final Clemson points in the 22-15 victory that gave the Tigers the National Championship.

When looking back at the night, Davis has vivid memories of the return, but his remembrance of what happened before the game is even more special.

“It still makes my hair stand up on the back of my neck,” recalled Davis. “I grew up watching the Orange Bowl as a little kid. At that time, January 1 was the biggest day of the year for college football. That was usually the game that decided the National Championship.

“The Rose Bowl (played that year between Iowa and Washington) was running long and delayed the start of our game, because NBC was doing both. We were in the locker room and there was a TV showing the Rose Bowl. In the last few minutes, they switched to Miami and the Goodyear blimp showed an overhead shot of the Orange Bowl. The announcers said, `And Clemson and Nebraska will come up next in a game that could decide the National Championship.’ That was a special moment for someone who had grown up watching and loving college football.”

When asked to recall the punt return against Nebraska, Davis had a somewhat comical view of the unsolicited advice he has received for years after the contest.

“It has been 30 years since that game and I bet there have been 5,000 people who told me if I had stayed outside, I would have scored,” said Davis. “There were 80,000 people in the stands, millions watching on television, and I had big guys chasing me. I was just trying to get as many yards as I could!”

Following his playing days at Clemson and one season (1984) with the Saint Louis Cardinals, Davis returned to Clemson to finish his degree program. At that time, he made the decision to work in federal law enforcement. His ties to Clemson and that 1981 season certainly helped move him in that direction, as he worked for one year for then South Carolina Senator Strom Thurmond. The initial interview process with Thurmond and a group meeting years earlier were events that Davis vividly recalled.

“When we beat Maryland in 1981 to win the ACC Championship, Senator Thurmond came into the locker room and shook the hand of every player and coach. That was a really big deal for me to meet Senator Thurmond.

“In 1988, I walked into his office to meet with him,” continued Davis. “The first thing I saw was a signed gameball in a glass-enclosed case from the 1981 Clemson team. He asked me if I was on that team. We talked Clemson football for at least 20 minutes before he offered me a job on his staff. Less than a year later, I was hired by the United States Secret Service.”

Some 23 years later, Davis is still serving his country. In his current role, he is Assistant Special Agent in Charge – U.S. Secret Service Special Operations Division and is program manager of his counter-assault teams.

“I was on President Clinton’s detail when he ran for office the first time in 1992 and was on the detail at the White House for five years,” said Davis. “He was a huge sports fan and he usually told me when he had watched Clemson play the previous Saturday.”

Davis still follows the Tiger program as closely as he can. He and his wife, Kim, have been married for 21 years, have two daughters, Hannah (14) and Sofie (10), and reside in Lovettsville, VA. They continue to travel to Clemson as much as time allows.

If Davis has one message to this current group of Clemson football players, it would be to enjoy the opportunity.

“As former players, we want the young men who are there now to experience a championship season. My time at Clemson continues to pay dividends for me to this day. I am looking forward to these guys enjoying the same things.”