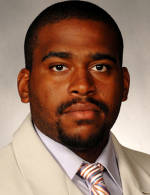 According to teammate Thomas Austin, Cory Lambert is the type of guy who likes breaking stereotypes. His road to Clemson was more challenging than most, but despite the obstacles he has faced, Lambert has been able to contribute to both the team and the community during his time as a Tiger.

Lambert was a highly-touted recruit after a successful career at Greenville (SC) High School. He chose Clemson over perennial powerhouses such as Alabama and Georgia, but his road to Tigertown was strewn with challenges. After graduating in 2003, he spent the following year working and studying for the SAT so that he could earn admittance into Clemson.

“That was definitely the hardest time for me because I didn’t know if I would get into Clemson or not,” recalled Lambert.

However, he persevered through the challenges and earned the right to join the Tigers in 2005.

Lambert red-shirted during his first season at Clemson, so it was not until 2006 that Lambert stepped onto the gridiron for the first time as a Tiger. He spent his first two seasons primarily contributing on special teams, but he also saw some playing time on the offensive line.

In 2008, Lambert became the only Tiger offensive lineman in history to start at three different positions in one season. He saw action at both tackle positions as well as at left guard. He was fifth on the offense in starts, so he was considered a starter during a year in which the team faced a great deal of adversity.

After a tough battle for a starting position this season, Lambert earned the starting nod for the first two games. For Lambert, it is the culmination of years of hard work and dedication.

“It’s a great feeling and it couldn’t have happened at a better time,” said #76. “I want to finish strong and be someone that contributes a lot this season. This could very well be the end of football for me and I want to give it everything I have. I want to make sure that when I’m done I can say that I played my hardest and I gave it my all for the team.”

Although Lambert has found success on the gridiron during his time at Clemson, perhaps earning a degree is his greatest feat. He is slated to receive a degree in sociology in December, something he is especially proud of.

“At my size, most people think that football is a given and it comes easy for me. But when it comes to that diploma, no one can take that away. I’ve earned that diploma on my own.”

Lambert is also proud of the fact that he has served as an inspiration to other members of his family. “I will be the first one in my family to graduate from college and it has set a goal for other family members to achieve higher than me. It’s amazing the way they look to me to find that hope and willpower.”

Among the family members that have been inspired by Lambert’s academic success is his twin sister Maggie, who is currently pursuing a degree. Interestingly, his twin stands at just 5’4″, over a foot shorter than her brother, who towers over her at 6’6″.

“Most people don’t know that I have a twin,” he admitted. “In high school, people didn’t even know we were brother and sister, much less twins.”

Although his football career might come to an end at the end of the season, he has exciting plans in store for the future. He was recently engaged and plans to tie the knot on February 27. His fiancé Sandie lives in Florida and Lambert plans to move to the Sunshine State after the Tigers’ final game. He has never lived outside of South Carolina, but he is excited to be close to his new family and start their life together.

Another exciting adjustment for Lambert will be the added responsibility of fatherhood. Sandie has a daughter from a previous relationship, but Lambert is thrilled to have the opportunity to be a part of her life.

“I’m excited about being a father,” he said. “She already calls me `Dad.’ I already consider her my own.”

Not only will he have a new daughter in his life, he also hopes to have a classroom full of children to guide. He has a passion for working with children and hopes to become an elementary school teacher.

“I really want to teach,” stated Lambert. “It’s something I’ve always wanted to do. Kids need role models at a young age. They need male role models more in elementary school and I want to be that role model.”

Lambert plans to become involved in a program that allows him to earn his certificate as he teaches. He is excited about the possibilities of making a difference in the lives of young children.

“I’ve always been able to connect with kids and help them,” said Lambert. “I can’t wait to be a teacher.”

Austin believes that Lambert has the personality to fulfill his dreams of becoming a teacher. “Cory doesn’t know a stranger…he loves meeting new people. He is very friendly and very outgoing.”

Although Lambert has big plans for the future, he has fond memories of his time at Clemson and his fellow seniors.

“In the beginning, we sat in the back of the room, and now we are in the front seats making decisions as a group of brothers. We’ve grown up together. It’s been an amazing journey and we’ve all learned something from each other. I’m excited for the next chapter in my life.”