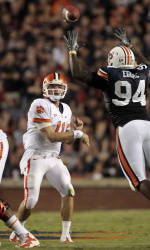 Clemson Falls In Overtime Heartbreaker To No. 16 Auburn, 27-24

The game appeared headed to another OT when Catanzaro made a 27-yarder. After a 5-yard illegal procedure penalty on the kick, the redshirt freshman’s second attempt hooked wide left, touching off a big celebration for the home Tigers.

Auburn (3-0) had rallied from a 17-0 deficit late in the first half and scored three touchdowns in the third quarter.

Clemson (2-1) has lost 14 consecutive meetings in the vintage but long dormant Southern rivalry.

It was the first regular-season meeting since 1971 and the second straight to have extra football, including the 2007 Chick-fil-A Peach Bowl.

Clemson, which had opened with predictably lopsided wins over North Texas and Presbyterian, stepped up for the Southeastern Conference opponent with a fast start in front of the biggest crowd the program had played in front of (87,451).

The rivalry renewal turned into a roller-coaster ride, where the teams took their turns in the driver’s seat.

Clemson threatened to score go-ahead points after pushing the ball near midfield on its final drive of regulation but Auburn stuffed a reverse. Then Parker’s third-and-long pass under pressure was just out of Dwayne Allen’s grasp down the right sideline.

Cam Newton completed seven passes for 203 yards and a pair of touchdowns, including a 78-yarder to Terrell Zachery in the third quarter to give Auburn its first lead at 24-17. Newton also ran for 68 yards but was intercepted twice.

Parker was 21-of-35 passing for 227 yards and a pair of touchdowns. Andre Ellington gained 140 yards on 22 carries in a game that was a statistical standoff.

Auburn scored 24 straight points after getting dominated for 29 minutes. Gus Malzahn’s offense racked up 258 yards in the third quarter after getting mostly held in check for the first two.

Auburn finally cashed in midway through the third quarter after a promising opening drive ended with Xavier Brewer’s interception at the 1, but it didn’t came easy.

McCalebb took an end around 12 yards for a touchdown, skirting the sideline then cutting back. Auburn tied it with Adams’ 8-yard touchdown pass on a third-down play five minutes later. Replay officials overturned the on-field call, ruling that he had possession when his foot came down on the line.

Clemson answered right back with Ellington’s 2-yard TD run to tie it up early in the fourth. The drive was aided by two pass interference calls, but Ellington also had a 21-yard run and an 11-yard catch to set up his score.

Clemson wasn’t fazed by the big crowd, scoring on its first possession and allowing just 16 yards the first three times Auburn got the ball.

Auburn’s normally prolific offense didn’t get a first down – or a completion – until the 6:54 mark of the second quarter. Auburn’s only points of the half came with Byrum’s 35-yard field goal as time expired.

That drive started a stretch when Auburn outgained Clemson 321-34. But Clemson has still outscored opponents 80-10 in the first half.