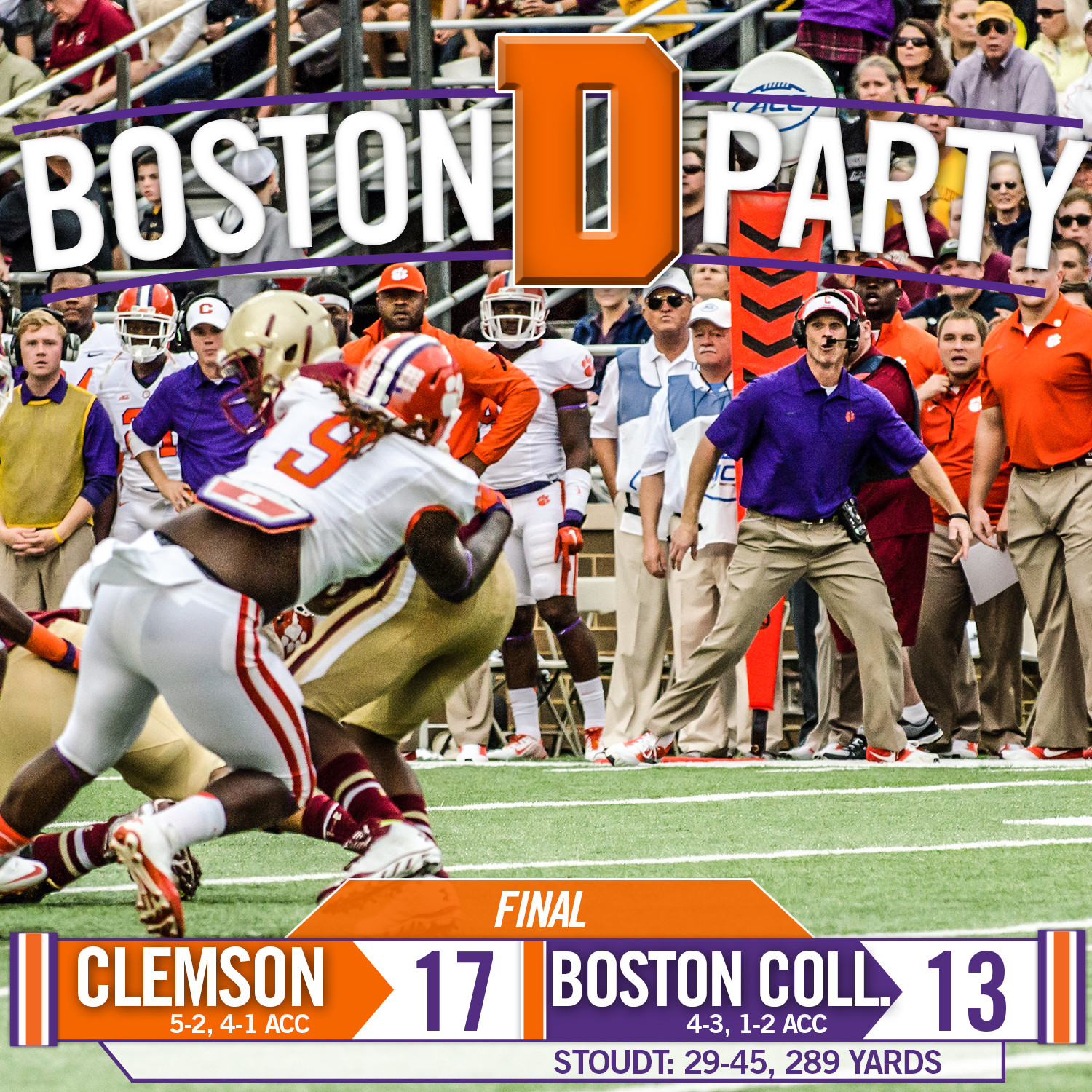 C.J. Davidson scored from 32 yards out with 9:35 remaining in the game and No. 22 Clemson’s relentless defense held from there in a 17-13 win over Boston College at Alumni Stadium.

Boston College quarterback Tyler Murphy did plenty of scrambling in the second half and had his team in Tiger territory late in the fourth quarter. But the Clemson defense forced four straight incompletions and the Tigers preserved the victory to take home the O’Rourke-McFadden Trophy for the sixth time in seven years.

“Two weeks in a row, our defense has had to stand up four downs in a row in the redzone, and they got it done,” said Head Coach Dabo Swinney. “This was another character win, the second week in a row.”

The Tigers held the Eagles to just 120 rushing yards, no small feat considering Boston College entered the game with a top-five rushing offense in the nation.

“We’ll take it,” stated a relieved Defensive Coordinator Brent Venables after the game. “You feel like you need a therapist after a game like that. But we found a way to win and made some huge stops.

“We have to be better disciplined. We’re going to have to rep all those trick plays in practice until we learn how to stop them. But I love our guys for the resolve and the fight that they showed. They were a top-five rushing team in the country and we really shut them down.”

Cole Stoudt played well in his first start since the Florida State game on September 20. The senior finished with a career-high 29 completions on 45 attempts for 285 yards. He directed the Tigers to 398 yards of total offense and 22 first downs.

“I still had a lot of shoulder pain this week, but I just tried to battle,” said Stoudt, who received the Leather Helmet Award as the game MVP. “Our coaches put together a great gameplan and it was great team effort to get this done today.”

Wayne Gallman scored the first Tiger touchdown, scampering in from 17 yards for his first career score. Gallman finished with 15 carries for 39 yards, while another Tiger freshman, wideout Artavis Scott, had 10 receptions for 72 yards. Mike Williams added eight catches for a game-high 128 yards.

After Boston College took a 13-10 lead in the fourth quarter, the Clemson offense responded when it needed it most. On third-and-long during a rain shower, Stoudt found Williams down the sideline for a 32-yard gain. A few plays later, Davidson found paydirt from 32 yards out to put the Tigers ahead for good.

Clemson’s defense took advantage of several miscues from the Eagle offense, including a big drop in the first quarter on a potential touchdown pass and an underthrow on a successful reverse play in the third quarter. The Eagles also missed an extra point, which forced them to go for a touchdown on the final drive.

“We saw a lot of contributions from a lot of guys,” said Swinney. “The thing that I was the most proud of is that we were able to rush for two touchdowns in two scoring situations.

“We knew it was going to be a slugfest. That’s a quality win.”