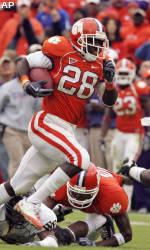 The victory ended a short two-game losing streak for the Tigers, who are now tied for second in the Atlantic Division of the ACC with a 2-2 conference record. Clemson is 3-3 overall and will face a top 10 Miami (FL) team next Saturday. Wake Forest fell to 4-3 overall, 2-2 in the ACC.

It was Clemson’s largest victory margin over an ACC team since a 47-10 win over Duke at Durham in 2007 and the largest victory margin over an ACC team in Death Valley since a 52-7 win over North Carolina in 2006. It was Clemson’s largest margin of victory over Wake Forest since 2000 and the Tigers continued their success against Wake Forest in games played at Clemson. The Demon Deacons have not won at Clemson since 1998 and have just two wins in Death Valley since 1961.

Spiller had nine carries for 106 yards and two scores, one a 66-yard run in the second period, and the other a 14-yard run in the third period. Spiller went over 6000 all-purpose running yards and 2800 rushing yards during the game. He became the first ACC player in history with over 6000 all-purpose yards. His 66-yard scoring run gave him at least one play of 60 yards or more in every game this year, five of which have gone for touchdowns.

Michael Palmer was Parker’s favorite with four receptions for 49 yards and a touchdown. Jacoby Ford had just one catch, but it went for 51 yards and set up a score.

Clemson had five redzone scoring opportunities and had four touchdowns and a field goal. Clemson had scored touchdowns in the redzone just three times in the first five games.

Clemson’s defense was outstanding, holding Wake Forest to just 178 total yards, including just 81 yards rushing on 44 attempts. Riley Skinner, who entered the game as the ACC’s top passer, was 11-24 for 82 yards and two interceptions. He was also sacked five times by Clemson’s defense. Kavell Conner was Clemson’s top tackler with eight, while reserve linebacker Tig Willard had seven.

DeAndre McDaniel ha five stops and a 26-yard interception return that set up a field goal. McDaniel is now tied for the national leader in interceptions with five in six games. DaQuan Bowers had a career high tying three tackles for loss. The Clemson defense had 12 tackles for loss as a team, the top total this season.

“This was a great win for us today,” said Clemson Head Coach Dabo Swinney. “We are proud of this team. We showed what we are capable of doing today. But we are still a 3-3 team. We have a long way to go.

“The defense was relentless today and dominated. They played smart and made tackles. I was proud of their effort.”