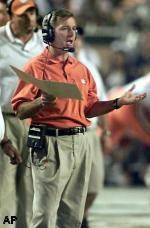 Clemson will open its 2004 football season with two conference games against Wake Forest and Georgia Tech, according to the schedule announced by the Atlantic Coast Conference and Clemson University on Monday. The Tigers will have one of the toughest road schedules in its history with trips to Texas A&M, Florida State, Miami (FL), Virginia and Duke on the 11-game slate.

Clemson opens the season September 4 with a home game against Wake Forest. It will be the latest season opener on the calendar for the Tigers since 1999. The Demon Deacons are the last team to defeat Clemson, as the Tigers won their last four games of the 2003 season by a combined 108 points, leading to a #22 final national ranking. Wake Forest defeated Clemson 45-17 in Winston-Salem on November 1, 2003.

“Maybe we can slow down Wake Forest with six months to prepare, because we couldn’t last year with just a week of preparation,” said Clemson head Coach Tommy Bowden. “This will be the first time we have opened with a conference game since I have been at Clemson, and that will add even more significance to the first game.

“This is a challenging schedule, especially when you look at the teams we will be playing on the road. We will be going into some tough environments for the first time (Texas A&M and Miami), in addition to our three games at traditional ACC opponents.

“We will be playing five teams who won bowl games last year and six bowl teams overall. When you take into account the teams we play on the road, this should be among the higher ranked schedules in the nation.”

Clemson will then face Georgia Tech in week two, September 11, also at Death Valley. This is the first time since the 1965 season that Clemson has played two ACC games to open the schedule. That year Clemson played NC State at home and at Virginia to open the season. The 2004 schedule will be the first time Clemson has played two home games against league opponents to open the season since 1958 when Frank Howard’s team opened the season with home victories at Death Valley over Virginia and North Carolina.

Clemson has beaten Georgia Tech each of the last three seasons, including a 39-3 victory in Atlanta last year, Clemson’s largest victory margin over the Yellow Jackets in 100 years. Each of the last four meetings between the two schools at Clemson have been decided by five points or less.

The Tigers will travel to College Station, TX to face Texas A&M on September 18. It will be Clemson’s first game with the Aggies since 1974 when Clemson lost to a 20th ranked Texas A&M team on the road, 24-0 in the season opener. It is the first of a two-game series between Texas A&M and Clemson. The Aggies are scheduled to play at Clemson on September 3, 2005.

Clemson’s fourth game of the year will be at Florida State. The Tigers defeated a sixth ranked Seminoles team at Clemson last season by a 26-10 score. Clemson has not won in Tallahassee since 1989.

The Tigers will have October 2 open, then face Virginia in Charlottesville for a Thursday night game. It will be Clemson’s third straight road game, the first time Clemson has played three straight road games since 1994. The contest will be televised nationally by ESPN and will kickoff some time between 7:30 PM and 8:00 PM. Clemson defeated Virginia 30-27 in overtime last year and each of the last three meetings between the two schools have been decided by five points or less, including two on plays within the last five seconds.

Clemson will return home on October 16 to face Utah State for the first time in history. It will be Clemson’s first home game in 35 days. This is the longest stretch without a home game during the regular season since 1984. Utah State is a member of the Sun Belt Conference, the same league as 2003 Clemson opponent Middle Tennessee.

Clemson concludes a three-game home stand with conference games against Maryland (October 23) and NC State (October 30), two teams that defeated the Tigers in 2003.

The Tigers then will go back on the road to face first-year ACC school Miami (FL) in the Orange Bowl. Clemson has not played Miami (FL) since 1956, but the Tigers have played in their stadium. Clemson won the 1982 Orange Bowl, by a 22-15 score over Nebraska to win the 1981 National Championship at the Orange Bowl. It will be Clemson’s first game in that facility since that triumph.

Miami (FL) defeated Clemson 21-0 in a regular season game at the Orange Bowl in 1956, the last time Clemson has played the Hurricanes. That game was a match-up of a 12th ranked Clemson team against an eighth ranked Miami (FL) team.

Clemson finishes its road schedule at Duke. The Tigers have defeated the Blue Devils all five years Tommy Bowden has been the head coach at Clemson, but the last meeting in Durham was a close 34-31 Tiger victory.

Clemson concludes the season against archrival South Carolina on November 20. The game will be played at Clemson. The Tigers have won six of the last seven meetings between the two teams overall and each of the last three played at Death Valley. The last South Carolina coach to win at Death Valley is current Clemson offensive coordinator Brad Scott, who led the Gamecocks to a 34-31 win at Clemson in 1996.