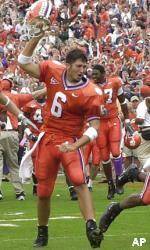 One of the most frequently asked questions we get at the Clemson Athletic Department is, “What is next year’s football schedule?” Although Clemson can schedule its own non-conference games, conference schedules for all member schools are compiled by the ACC league office. The league office completes all conference scheduling after taking into account non-conference games and dates already agreed upon by member schools. The schedules really don’t exist until that point. This process is usually completed between December 15 and February 1 of each year.

Opponents are also subject to change, as evidenced by the 2001 football season. The Tigers were scheduled to play Tulane on Oct. 6, but that school backed out late in the scheduling process. Clemson then played Wofford on Sept 8.

The ACC has released Clemson’s conference opponents though 2015. Those opponents for 2006 and sites are:

Another popular question is, “What time will the Homecoming game kickoff?” All game times are released by the ACC after discussions with various television networks. Game times are normally not released until 12 days prior to the game. However, three times a year the networks can declare a six-day window, meaning they can wait until the Sunday prior to the game. The 2002 Clemson vs. Maryland game was an example of a six-day window.

We get these questions from people trying to plan weddings, conventions, on-campus activities and other events, and we want to help you as much as possible. As soon as the complete schedule is released, it will be posted on clemsontigers.com. Thank you for you patience and interest in Clemson football.