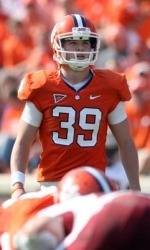 CLEMSON, SC – Clemson kicker Chandler Catanzaro has been named one of 20 semifinalists for the Lou Groza Award. The honor is presented each year to the top placekicker in the nation.

Catanzaro, one of four ACC placekickers on the list, is 13-16 on field goals so far this season. He ranks in the top 25 in the nation in field goals per game and scoring and is the ACC’s leading scorer with 75 points. He is 36-37 on extra points.

The native of Greenville, SC is 5-7 on field goal attempts of 40 yards or more. He had three field goals of at least 45 yards in Clemson’s win over Toy, and was 5-5 on field goals in the win over Boston College. He won the Leather Helmet Award as the MVP of that game.