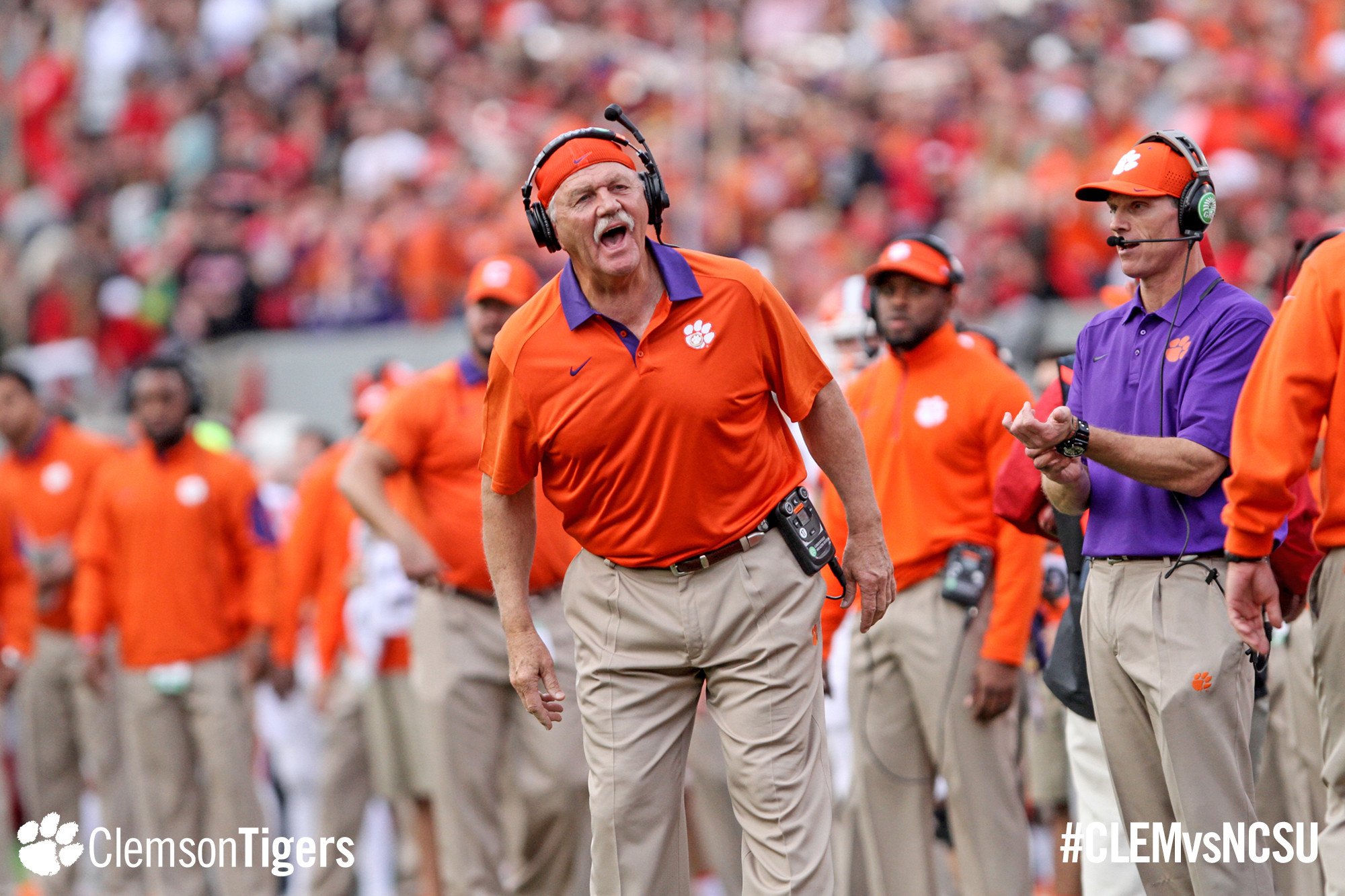 Clemson, S.C.—Associate Head Coach and Defensive Tackles Coach Dan Brooks announced his retirement on Wednesday after 43 years in coaching, 33 at the college level and the last eight at Clemson under Head Coach Dabo Swinney.

It has been quite a year for Brooks, who coached his 400th game at the FBS level in September, was named Assistant Coach of the Year by the American Football Coaches Association, and helped the Tigers to the ACC Championship and the National Championship. Clemson played in 10 bowl games in his eight years, won five Atlantic Division titles and three ACC Championships.     Seven of the eight teams finished in the top 25, including four in the Top 10.

“We did not want Dan to retire, I tried to talk him out of it,” said Swinney. “Dan has had a great career and has had such a strong impact on so many young men. I can’t think of a coach who is more respected by his peers in the profession, and by his players past and present. We wish Dan and Kathy nothing but the best and thank both of them for what they have done for this program.”

The Tigers had an 85-25 record since he joined Dabo Swinney’s staff to start the 2009 season.   His defensive line was a big reason Clemson led the nation in tackles for loss this year and had more tackles for loss than any other program over the last five years.   Clemson ranked in the top 15 in the nation in total defense and scoring defense each of the last three years, including a No. 1 ranking in total defense in 2014.

This year’s Clemson defense ranked in the top 10 in the nation in tackles for loss, sacks, scoring defense, total defense and pass defense, a big reason the Tigers were 14-1 and won the school’s 16th ACC title and second national championship.

Clemson has finished with at least 10 wins each of the last six years, joining Alabama as the only schools that can make that claim.

“I had really made up my mind this past summer that this would be my last year,” said Brooks. “But, I wanted to go through the season and make sure.

“I can’t thank Coach Swinney enough for giving me this opportunity. After the 2008 season I was out of a job for the first time in my career and he gave me this chance. I have been blessed to be a part of this program and it has been such a gratifying experience.

“You are in this profession for the relationships you have as a staff and with your student-athletes. I have been so fortunate to have great players to work with here and at my other stops.

“I am one of the lucky ones to retire on my own terms and to win a national championship in my final season. It has been a great experience, but I am looking forward to spending more time with my family.”

Brooks coached in his 400th game at the FBS level last September and finished having been on the sidelines for 412, the last 110 at Clemson. Thirty of his former players have been drafted by the NFL (a number that will increase in May), including seven in the first round, coached 17 all-conference selections, and an Outland Trophy winner.

Former Tigers he coached who are in the NFL now include Jarvis Jenkins, Grady Jarrett, Brandon Thompson, DeShawn Williams and Tavaris Barnes. Carlos Watkins, an All-American on the 2016 team, will join them next year.

When Clemson won the National Championship with the victory over Alabama on January 9, it was the second title for Brooks. He was also a member of the Tennessee staff when they won the national title in 1998.   He coached in 27 bowl games in his career, including 25 since 1992.

Brooks, who was born in 1951 in Sparta, NC, coached two years at Western Carolina, five at Florida, six at North Carolina, and 15 at Tennessee before coming to Clemson for eight seasons. He was also a head coach at the high school level in Kings Mountain, NC where he coached former Clemson star running back Kevin Mack.

He and his wife Kathy have been married for 45 years. They have two children. Tara is an assistant athletic director at Tennessee and Rhett is a strength and conditioning coach at SMU.