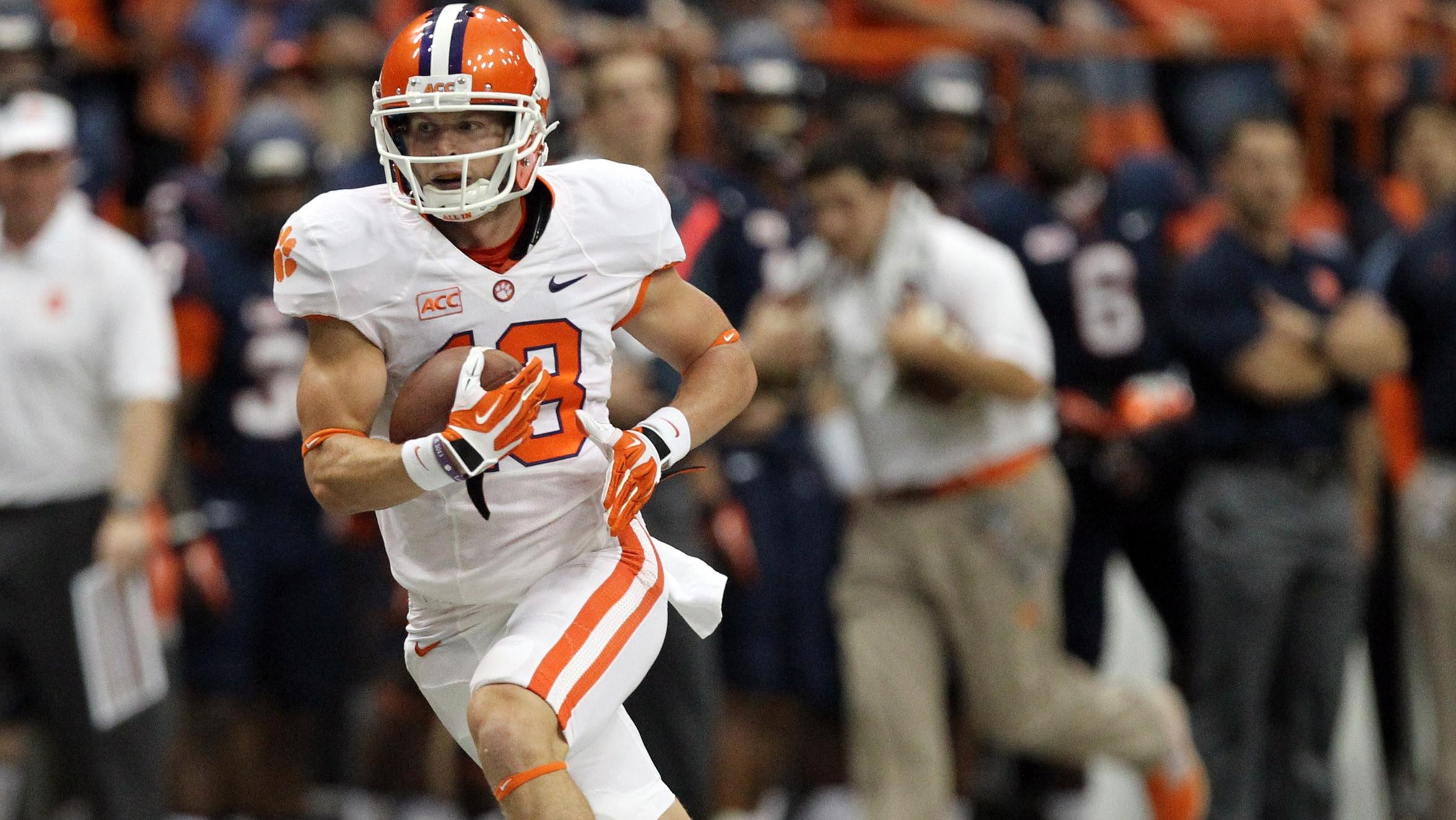 SYRACUSE, NY – Just when it looked like Syracuse might make things interesting, Tajh Boyd and Sammy Watkins made absolutely sure there would be no late drama Saturday at the Carrier Dome.

Late in the third quarter, the Orange were driving inside the red zone and looking to trim a 35-7 halftime deficit back to two touchdowns. Instead, the Clemson defense stopped Syracuse on downs, and two plays later, Boyd went over the top to Watkins for a 91-yard score that put the game away, as the Tigers rolled to a 49-14 victory.

The play was the second-longest touchdown in Clemson history and gave Boyd 455 passing yards on the day, a new school record. He completed 20-of-27 passes and threw five touchdowns, none bigger than the final one to Watkins.

“Tajh threw a wonderful ball,” Watkins said. “I had to run as fast as I’ve ever ran to get it, but it was a great ball.”

Watkins finished the game with four grabs for 126 yards, while fellow junior Adam Humphries had three catches for a career-high 118 yards and two scores.

Clemson served as the welcoming committee for Syracuse to the ACC on the day, but there was little welcoming about what transpired on the field.

For the second game in a row, Clemson scored on its third play from scrimmage, and it had reached the end zone twice more before the end of the first quarter to make it 21-0 and remove any real danger of a shocker in Syracuse’s conference debut.

Boyd became just the third quarterback in ACC history to reach 10,000 yards of total offense, as the third-ranked Tigers (5-0, 3-0 ACC) remained unbeaten and won their 13th straight game by a double-digit margin over an unranked opponent.

Just as it had done against Wake Forest one week earlier, Clemson needed just three plays from scrimmage to find the end zone. After quick passes to Watkins and Humphries netted 22 yards on the first two plays, Boyd got the Orange secondary to bite on a fake and went over the top to Humphries, who strolled into the end zone for a 60-yard touchdown.

Clemson added to its lead with a 10-play, 92-yard march that culminated in a one-yard plunge by Zac Brooks to make it 14-0 with 4:07 left in the first quarter.

Boyd and Humphries hooked up for another long score on Clemson’s next drive, as Boyd faked a throw to Watkins in the flat and instead went deep down the sideline to Humphries, who shook a tackle and went in for a 42-yard score to make it 21-0.

“We talked about it last night – if we could (block) them early, we felt like there would be some big plays early and it would create good momentum for us,” Swinney said. “We really wanted to feel like after the first quarter that we could get control of the game, and I felt like we did.”

The Orange scored their first touchdown as a member of the ACC on the first play of the second quarter, as Jerome Smith rumbled 66 yards to make it 21-7.

After Syracuse forced a Clemson punt, the Orange were on the move and looking to make it a one-score game again. Instead, Bashaud Breeland made a leaping interception of a Terrel Hunt pass deep down the sideline and the Tigers took over.

Clemson stretched its lead to 28-7 just five plays later, as Boyd hit Stanton Seckinger in the end zone for a 17-yard score.

The senior quarterback threw a perfectly timed pass over the shoulder of a Syracuse defender that he released well before Seckinger, running a wheel route, had even turned his head to look for the ball.

“I don’t really get too excited about many passes, but that one I was,” Boyd said. “I came back to the sideline, and I was like, ‘That was a dime.'”

Boyd threw his fourth touchdown pass of the day on the next drive, as he went over the top to Martavis Bryant for 40-yard score that made it 35-7, which was the score at halftime.

Syracuse cut the Clemson lead back to 35-14 on a 28-yard touchdown run by Prince-Tyson Gulley, as the Orange opened the second half with a seven-play, 82-yard drive.

Syracuse got the ball back and looked to make things interesting, but after one first down, Vic Beasley sacked Hunt on a second-down play and Darius Robinson came up with his second interception of the day on third down.

But Boyd was intercepted for the second time on the day – and the season – and Syracuse marched as far as the Clemson 17-yard line.

The Orange went backward from that point, however, as Beasley recorded a tackle for loss and a sack – his second of the day and eighth of the season – on consecutive snaps, and Syracuse’s Ryan Norton missed a 42-yard field goal wide left to keep the score 35-14.

“I’m really proud of the way they responded to adversity,” Clemson defensive coordinator Brent Venables said. “I really kind of felt it going into halftime. Through close to 20 years of experience, (I felt), ‘We don’t have this one sealed and delivered yet.’ And sure enough, they got us on our heels that first drive coming out of the half. We didn’t play very well and didn’t coach them very well that first drive, and then we got settled back down and made some huge plays there in that third quarter to keep things under wraps.”

Clemson’s defense came up with its biggest stop of the game on the next Syracuse possession. After the Orange had used a 38-yard fake punt to set up shop inside the red zone, the Tigers stopped them on downs to get the ball back at the 13-yard line.

Two plays later, Boyd went over the top to Watkins for a 91-yard touchdown that made the score 42-14 and finally put the game out of reach with 40 seconds left in the third quarter.