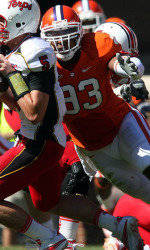 Bowers and Ellington Named ACC Football Players of the Week

GREENSBORO, NC – Wake Forest redshirt-freshman running back Josh Harris and North Carolina junior wide receiver Dwight Jones headline a list of six players recognized as the Atlantic Coast Conference Football Players of the Week, announced Monday by the ACC. Harris, in his first career start, ran for 241 yards, the fifth-best mark by an ACC freshman. He added two scores, including an 87-yard run, which was the longest by a Demon Deacon since 1968. Jones set career bests in receptions, yards and touchdowns as the Tar Heels topped Virginia 44-10, earning their first win in Charlottesville since 1981. He racked up 119 receiving yards in the first quarter en route to 198 for the game.

DEFENSIVE LINEMAN – Da’Quan Bowers, Clemson, DE, Jr., 6-4, 275, Bamberg, S.C. (Bamberg-Ehrhardt) Bowers recorded a career high three sacks and four total tackles for loss in Clemson’s 31-7 win over Maryland. All three of Bowers’ sacks were on third down plays and forced punts. They led to 30 yards in losses. He became the first Clemson player to record three sacks in a game since 2001. Bowers now leads the nation in sacks with nine and in tackles for loss with 15.5. Bowers finished the game with six total tackles, as Clemson held Maryland to just seven points, the fewest for the Clemson defense against an ACC opponent since last year’s 38-3 win over Wake Forest. Bowers was named National Defensive Player of the Week by the College Football Performance Awards website.

SPECIALIST – Andre Ellington, Clemson, RB, r-So., 5-10, 190, Moncks Corner, S.C. (Berkeley) Ellington had an 87-yard kickoff return for a touchdown that was a key to Clemson’s 31-7 win over Maryland. Maryland had just taken a 7-3, lead and Ellington’s return brought the Tigers back to the lead at 10-7. Clemson never trailed the rest of the game. Ellington had a career high 122 yards on two kickoff returns. He was named national Kick Returner of the Week by the College Football Performances Awards website. His kickoff return for a touchdown was the first by a Clemson player since C.J. Spiller had an ACC-record four kickoff returns for scores last year. Ellington also added a team-best 41 yards rushing and another touchdown for the Tigers.

OFFENSIVE BACK – Dwight Jones, North Carolina, WR, Jr., 6-5, 210, Burlington, N.C. (Cummings/Hargrave M.A.) Jones had seven receptions for 198 yards and two touchdowns (all career highs) in Carolina’s 44-10 victory at Virginia. It was the Tar Heels’ first win at UVA since 1981. Jones, who had 119 receiving yards in the first quarter, had touchdown catches of 81 and 20 yards. He also had a 54-yard reception to the 1-yard line, which led to another TD. The previous high for a Tar Heel receiver in 114 prior meetings against Virginia was Sam Aiken’s 179 yards in 2002. Carolina scored on its first play from scrimmage when Yates connected with Jones on an 81-yard touchdown strike. Jones’ 198 yards receiving rank as the fifth-highest single-game total in school history.

OFFENSIVE LINEMAN – Brandon Washington, Miami, G, So., 6-4, 330, Miami, Fla. (Northwestern/Milford Academy) Washington anchored a Miami offense that recorded a season-best 448 yards and did not allow a sack in a 28-13 win at Duke. As the Hurricanes’ starting right guard, Washington graded out at 97 percent while recording seven pancake blocks against the Blue Devils.

DEFENSIVE BACK – Vaughn Telemaque, Miami, S, So., 6-2, 207, Long Beach, Calif. (Long Beach Poly) Telemaque had two interceptions to lead a Miami defense that forced five interceptions and two fumbles in a 28-13 win over Duke. Telemaque also had six tackles for the UM defense, which is tied for second nationally in turnovers gained among BCS schools. It is the ninth time this season that an ACC player has claimed multiple interceptions in a single game.

ROOKIE – Josh Harris, Wake Forest, RB, r-Fr., 5-10, 205, Duncanville, Texas (Duncanville) Harris, making his first career start, carried 20 times for 241 yards and two touchdowns in Wake Forest’s 52-21 loss at Virginia Tech. Harris’ 241 yards rushing are the most ever allowed by Virginia Tech, surpassing the 239 by Temple’s Paul Palmer in 1986. Harris was the first Deacon since 2005 to rush for over 200 yards in a game. His 241 yards were the second-most ever by a freshman at Wake Forest. His 87-yard scoring run was the longest by a Deacon since Freddie Summers in 1968. The 241 yards are tied for the fifth-most in the FBS this year. It marked the fifth-best freshman rushing effort in ACC history.