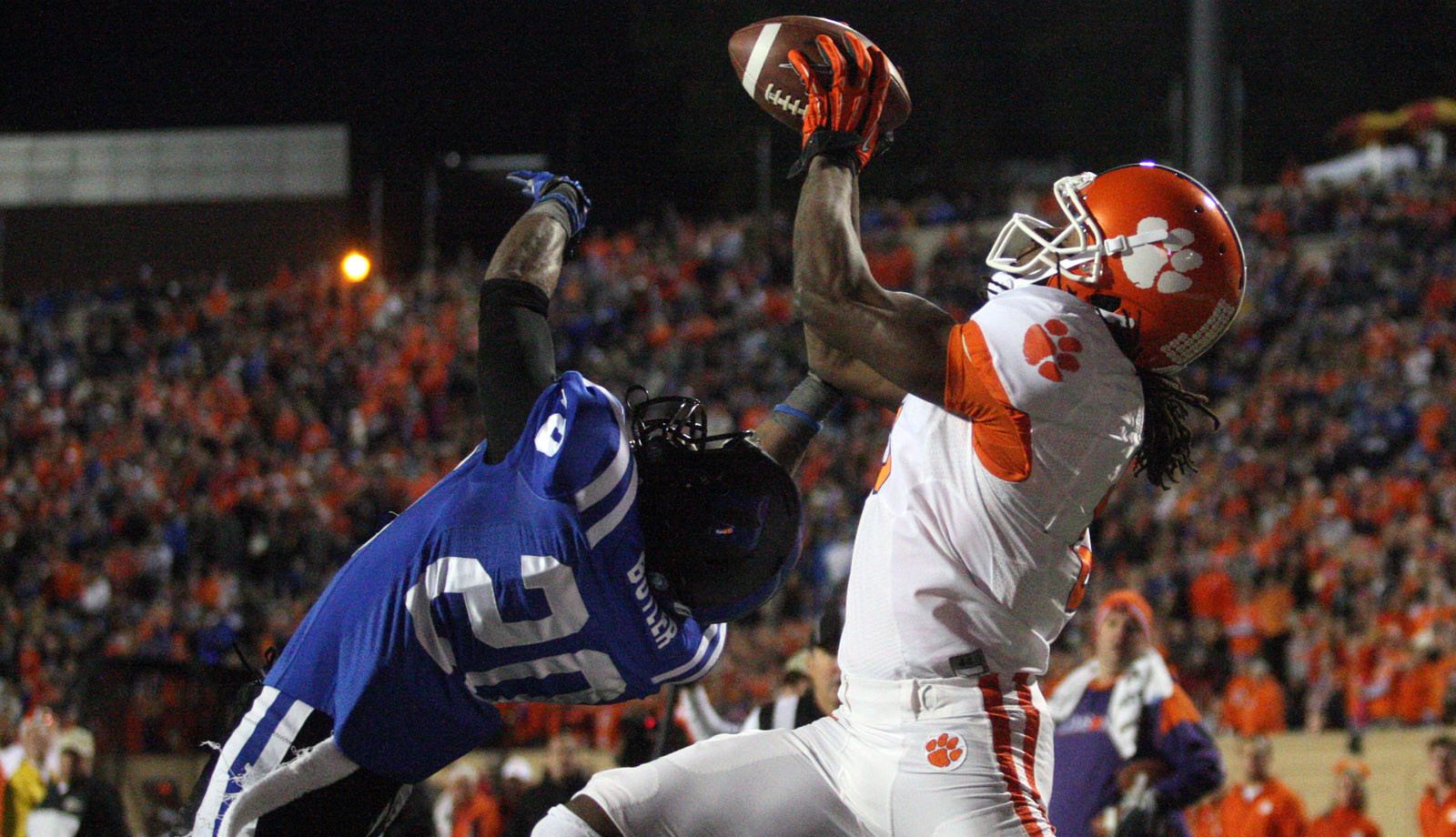 DURHAM, NC – Broken records are becoming a bit like, well, a broken record for the Clemson offense.

Tajh Boyd threw five first-half touchdowns and DeAndre Hopkins hauled in three of them in the first quarter alone, as Clemson rolled up 720 yards of offense in thumping Duke 56-20 on Saturday at Wallace Wade Stadium.

Along the way, Boyd broke Woody Dantzler’s school record for career touchdown responsibility and Hopkins did the same to receiving touchdown marks both for a career and season previously held by Aaron Kelly and teammate Sammy Watkins, respectively, as the Tigers rolled up 34 first downs and 344 passing yards.

“We felt if they were going to play man coverage in the secondary, we could be successful like we were against Wake Forest,” Tiger head coach Dabo Swinney said afterward. “Tajh was terrific in the first half, and Nuk continues to set records.”

And so does the Clemson offense. The 720 yards it tallied were the second-most in school history, and the 56 points it scored were the most ever by the Tigers at Wallace Wade Stadium.

The No. 10 Tigers (8-1, 5-1 ACC) wasted no time getting on the scoreboard, as they marched 76 yards on their opening drive and found the end zone on a five-yard fade route from Boyd to Hopkins for a 7-0 lead.

Duke’s first possession also netted points, but only three, as the Blue Devils drove 54 yards on 12 plays and made the score 7-3 on a 46-yard field goal by Ross Martin.

Boyd and Hopkins hooked up again for a touchdown just four plays later to build the lead to 14-3. Hopkins beat his man down the middle of the field for a 58-yard score, the 21st touchdown reception of his career, which broke a school record previously held Kelly. Boyd also broke Dantzler’s touchdown responsibility mark on the play with the 69th of his career.

In his typically humble fashion, Boyd deflected the credit for his achievements.

“There are not too many quarterbacks that can say they have the type of receivers that I have here,” Boyd said. “Even beyond Nuk and Sammy, all of those guys are unbelievable players. They have been working hard, and it’s always fun to see those guys come out and make plays.”

Duke struck right back, however, as Sean Renfree found Jamison Crowder wide open just two plays – and 17 seconds – later on a 77-yard bomb that made the score 14-10 with 7:02 to go in the first quarter.

Hopkins hauled in his third touchdown of the quarter on the ensuing drive, breaking open down the sideline and coasting into the end zone for a 45-yard score that made the score 21-10. The touchdown reception was the 13th of the season for Hopkins, which set a Clemson single-season record, and also put the junior over the 1,000-yard mark on the season.

“Records are just records,” said Hopkins, who finished with four grabs for 128 yards on the night. “They are meant to be broken. And one day somebody is going to come break my records. It feels good for the time being that I have them, but that’s not my main goal or my focus.”

Watkins got into the act on the Tigers’ next drive, making a 30-yard touchdown grab on a post pattern to cap a seven-play, 80-yard drive and make the score 28-10 with 0:16 left in the first quarter.

Duke cut its deficit back to 28-17 early in the second quarter, as Brandon Connette hit tight end David Reeves for a 17-yard touchdown with 13:12 to go until halftime.

Boyd soon threw his fifth touchdown pass of the first half, however, this time hitting Martavis Bryant for a 41-yard score on a corner route to give Clemson a 35-17 lead.

Boyd accounted for another touchdown before the half, this time with his feet, as he darted in from 21 yards out to make the score 42-17 one play after Watkins had set Clemson up in Duke territory with a 30-yard grab down the sideline.

For the second contest in a row, Boyd threw five touchdowns in the first half, which matched the school record for an entire game, but he was unable to add to that tally after halftime on either occasion to set another new record.

“Tajh was awesome tonight,” Tiger center Dalton Freeman said. “He made all the right calls. We knew we could hit some big plays to Nuk and Sammy.”

Clemson had 487 yards of total offense in the first half, a school record for a half. The previous high was 393 in the second half against Wake Forest in 1981, when the Tigers finished with 756 yards, the only other 700-plus-yard game in school history.

The scoring slowed down a bit after halftime, but Clemson built its lead to 49-17 on a one-yard touchdown run by D.J. Howard that capped a 10-play, 69-yard drive with 7:01 to go in the third quarter.

Backup Cole Stoudt picked up where Boyd left off and threw a touchdown pass for the Tigers early in the fourth quarter, as he found Charone Peake in the corner of the end zone for a 12-yard score on a fourth-down play that capped an 11-play, 86-yard drive and provided the final margin at 56-20.

“It was great to get some action with the second team on both sides of the ball,” Swinney said.

Clemson won its fourth road game of the season for just the second time in the last 15 years and now returns home for the final three games of its regular season, beginning Saturday against Maryland for Homecoming.

“Overall we continue to respond and play as a team,” Swinney said. “It feels great to get a fourth win away from home.

“This was a dominant performance, and I am proud of our team,” he added.