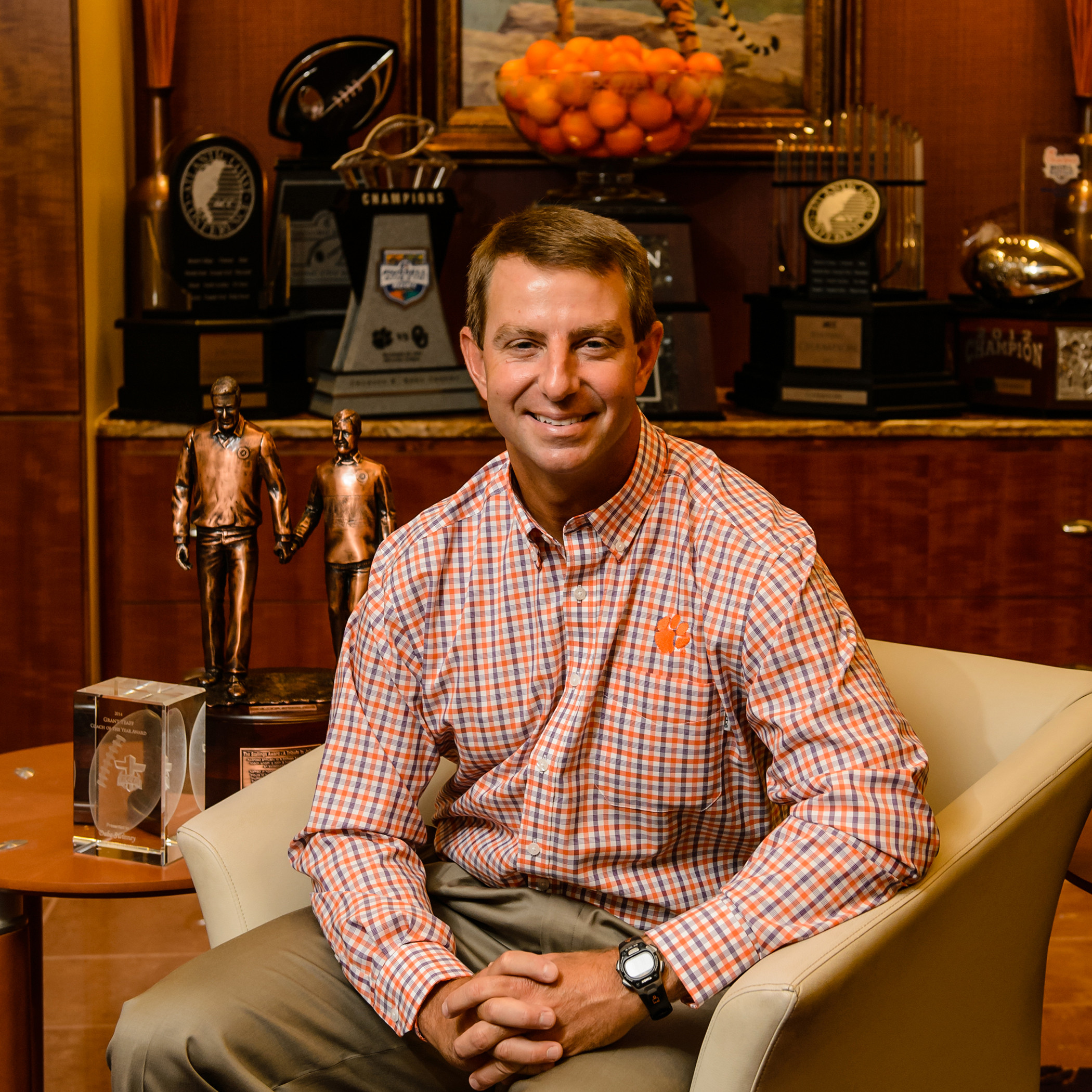 These are only a few of the landmark accomplishments for Clemson since 2011, but they provide the best evidence of the clear transformation that has taken shape within the program under the leadership of Dabo Swinney.

Prior to the record-setting four-year run from 2011-14, Clemson had not produced a 10-win season since 1990 or an ACC Championship since Ken Hatfield’s second season as head coach a year later.

But the seeds that led to the program’s current status as one of the nation’s most consistent winners were planted on Oct. 13, 2008. It was on that fateful morning that Tommy Bowden resigned as head coach, yielding his duties to the up-and-coming Swinney, at the time the team’s wide receivers coach.

Swinney said his task as the interim head coach was straightforward.

“The biggest task was to bring everyone together,” he said. “Clemson felt divided and there was a ton of negativity all around our program. We wanted to make it a new beginning. We had an opportunity to unite our fanbase. But we had to get everyone on the same page and create some positive energy.”

As the Tigers prepared for Georgia Tech under a first-time head coach, several ideas and traditions that continue today took root. Swinney implemented an “All-In” policy, a phrase used as a reference to the commitment level he seeks from players and coaches within his program.

He also came up with the idea of Tiger Walk, where players and coaches exit the team buses and proceed through Lot 5 amongst the fans just over two hours prior to every home game.

“I had no idea what to expect that first Tiger Walk,” Swinney said. “It was the only time we ever came the route we took that day. We came over the hill (on Perimeter Road) by the McFadden Building and there must have been 15,000 people. The guys on the bus immediately came to life. It was a celebration of Clemson and our players, and embracing the journey that was ahead of us. I have really fond memories of that first Tiger Walk.”

That same week, Swinney will be long remembered for his first run down the Hill, one in which his adrenaline pushed him into a sprint far ahead of the players behind him.

Swinney led the Tigers to a dramatic win over rival South Carolina that season, solidifying himself as Clemson’s permanent head coach. In his first full season, he guided the Tigers to the 2009 ACC Championship game behind a dynamic offense that featured the electrifying C.J. Spiller.

But the events of the season that followed are ultimately what led his program to unprecedented heights. Clemson went 6-7 and lost to South Florida in the Meineke Car Care Bowl.

In today’s “what have you done for me lately” society, it would have been easy for the vibes to turn negative again. But Swinney wanted no part of that.

“Some people saw it as a disappointment, but it was one of the best things to happen to our program,” he admitted. “You can’t always measure your development or growth by a scoreboard. You may have a great season, but how did you do it? With all my heart, I knew we were in great shape. We lost five games by six points or less. We lost in overtime to Auburn on the road (in 2010), and they won the national championship. I saw a team grow closer and care about each other, despite our struggles. I saw the fruits of our labor taking root through the process.

“And then, I saw a recruiting class not flinch, guys like Stephone Anthony, Sammy Watkins, Grady Jarrett, Charone Peake and Tony Steward. All those guys came to Clemson. We came back the next year and won the ACC.”

The 2011 season proved to be a breakthrough. Swinney’s team, comprised of 42 first and second-year freshmen, defeated three straight top-25 opponents on its way to the ACC crown, a memorable 38-10 victory over No. 3 Virginia Tech in front of a frenzied Tiger crowd in Charlotte, N.C.

But a sour taste was left in the mouths of everyone in the program following a disappointing showing in the Orange Bowl against West Virginia.

“We were in a BCS bowl for the first time, and our guys didn’t know how to handle success,” Swinney said. “We learned how to handle adversity, I saw that. But learning how to win is a huge part of building a program. Sometimes you need your butt whipped to be able to grow.

“After the game, everyone was embarrassed and down. I told the team it wouldn’t be 31 years before we were back at the Orange Bowl. And when we come back, we’d have a different result.”

But before the Tigers could earn a return trip to South Florida, the 2012 team validated the previous team’s success with an 11-win season. It culminated with a gutty, come-from-behind triumph over No. 7 Louisiana State behind Chandler Catanzaro’s field goal as time expired in the Chick-fil-A Bowl.

With reigning ACC Player-of-the-Year Tajh Boyd at quarterback and an All-America wide receiver in Watkins, much was expected of Clemson in 2013. And the Tigers did not disappoint, once again winning 11 games and closing it out in style with a bowl win, this time a 40-35 thriller in, you guessed it, the Orange Bowl. This time the win came over an Ohio State program with a 24-1 record in two seasons under Urban Meyer entering the contest.

“We don’t win that game without the experience two years earlier,” Swinney said. “If you handle adversity the right way, you can build the right kind of culture.”

Perhaps the most important facet of his program’s culture is the commitment to developing the holistic student-athlete, on and off the field. In six years, Swinney has seen 120 seniors come through Clemson, and 114 have a degree in hand.

“That’s what I’m most proud of,” said Swinney. “We’ve developed outstanding men. We’re not perfect, but we have a great group of guys. Eighty percent of guys who have gotten a shot to play in the NFL have made a roster. That speaks to the growth they’ve gotten as a man at Clemson.

“We’re in the love and serve business…we just happen to coach football. We’ve had great wins and moments, but how are we impacting players’ lives and educating them?

“People don’t like me saying that, but it means more to me than any win ever could.”