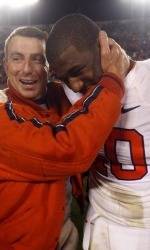 BLACKSBURG, VA – The Clemson Tigers sent a message to the ACC and to the rest of the college football world Saturday in Blacksburg, VA. That message – this is not the same ol’ Clemson Tigers.

Using a stifling defense and getting its customary big play or two from its revamped offense, No. 13 Clemson stunned 11th-ranked Virginia Tech, 23-3, at Lane Stadium.

“Going into the game all we heard about was 2006 and 2007, whenever Virginia Tech dismantled the Clemson team,” Clemson tight end Dwayne Allen said. “We wanted to show that we are not the 2006 team. We are not that 2007 team. We are the 2011 Clemson Tigers.”

And what the 2011 Clemson Tigers have done is something that has never been done in the history of the ACC. Thanks to their 20-point victory over Virginia Tech, the Tigers became the first ACC institution to beat three straight ranked opponents in consecutive weeks.

“There is not anybody other than these 115 players and this staff that believed we would be 5-0,” Clemson Head Coach Dabo Swinney said. “But, you know what? That’s all that matters. The thing I told our team, and they have bought into it, is that if you are going to change Clemson you have to change it from the inside out.”

The Tigers changed Clemson by beating a ranked Virginia Tech team on its field, while playing in the same style Virginia Tech Head Coach Frank Beamer made famous – playing tough, physical and simply out-muscling their opponent.

“Virginia Tech is a smash mouth team,” Clemson defensive end Andre Branch said. “We felt like as a defense that nobody can just line up and run against us… We knew they were going to run the ball, but at the same time it was on us to stop that.”

Though the Tigers rushed for only 119 yards, 61 of those came in the fourth quarter when it was time to take control of the game and run time off the clock. Clemson used the running game to finish the Hokies off when freshman Mike Bellamy took a handoff and raced up the middle 31 yards for the game’s final score.

“It’s great to come into someone’s house and win a game, but to come in here and do what we did tonight, makes it even more special,” Allen said.

Allen, who caught four passes for 75 yards, added to that special night in the third quarter, when on the Tigers first drive, he caught a 32-yard touchdown pass from quarterback Tajh Boyd, giving Clemson a 17-3 lead at the time. It was a big play in the sense that it sucked all the momentum out of Lane Stadium and put the pressure on a Virginia Tech offense that failed to show any consistency against the Clemson defense.

Clemson finished the game with 20 unanswered points after the Hokies tied it up at 3-3 on Cody Journell’s 24-yard field goal with 4:35 to play in the first half.

After that, Boyd led Clemson on a nine-play, 48-yard scoring drive, capped with a one-yard Andre Ellington run. Then, after the defense made a stop on Virginia Tech’s first possession of the second half, Allen caught his 32-yard touchdown pass from Boyd.

“Coach (Kevin) Steele always says the sky is the limit for us,” Branch said. “Once the offense got (Allen’s) touchdown, we as a defense said, `We are going to win this game.’ We decided then, that they are not scoring anymore.”

And with that, the message was sent to everyone in the ACC and to anyone else who wants to listen.