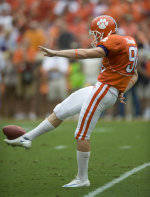 CLEMSON, SC – Clemson punter Dawson Zimmerman has been named one of 10 semifinalists for the Ray Guy Award, the honor presented each year to the nation’s top punter. The Ray Guy Award is presented by the Augusta Sports Council. Three finalists will be announced on November 22 and the award will be presented December 9 in Orlando, FL at the Home Depot Awards Show.

Zimmerman is the only ACC punter in the final top 10.

Zimmerman has averaged 43.6 yards per punt on 42 attempts this year. He is on pace to record the fourth best punting average in Clemson history and the best since Chris Gardocki averaged a Clemson record 44.5 yards a punt in 1990.

Zimmerman has a net punting average of 41.8 yards per punt and 14 of his 42 punts have been downed inside the 20. He is the major reason Clemson is 14th in the nation and first in he ACC in net punting. Opponents have just 75 total punt returns against Zimmerman’s 42 punts this year and opponents have not had any punt return yards against the Tigers in the last three games.

Zimmerman’s season has included two punts of at least 76 yards. He had a 79-yarder in the season opener against North Texas, the second longest punt in Clemson history, and a 76-yarder at Boston College, the fourth longest punt in Clemson history. He had a 51.5 yard average on six punts in the first game of the season against North Texas, the best performance in the nation that week.

His biggest play of the season might have come last week against NC State on a 38-yard attempt. Zimmerman caught an errant snap with the one hand with the game on the line and got a rugby style punt off that travelled to the NC State 15. Clemson won the game, 14-13. Clemson Head Coach Dabo Swinney presented Zimmerman with a game ball after the contest for that play.

The Ray Guy Award was created in 2000 to honor Ray Guy, and All-American at Southern Mississippi and an All-Pro in the NFL with the Oakland Raiders. Guy was a native of Thomson, Ga.