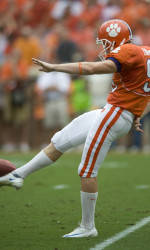 CLEMSON, SC – Clemson senior punter Dawson Zimmerman is one of 30 preseason candidates for the Lowe’s Senior Class Award. An acronym for Celebrating Loyalty and Achievement for Staying in School®, the Lowe’s Senior CLASS Award honors the attributes of senior student-athletes in four areas: community, classroom, character and competition.

The award program is designed exclusively for college seniors who are utilizing their complete athletic eligibility, remaining committed to their university and pursuing the many rewards a senior season can bring. The award is sponsored by Lowe’s, an official Corporate Partner of the NCAA, and is managed by Premier Sports Management.

The 30 candidates will be narrowed to 10 finalists midway through the regular season, and those 10 names will be placed on the official ballot. Ballots will be distributed through a nationwide voting system to media, coaches and fans who will select one finalist who best exemplifies excellence in the four Cs of community, classroom, character and competition.

Zimmerman has been outstanding in the classroom and one the field. A two-time Academic All-ACC performer, Zimmerman was a semifinalist for the Ray Guy Award last year when he averaged 40.6 yards per punt on a net punting basis, third best in Clemson history. His gross average of 40.8 yards per punt for a career is seventh best in school history.

Zimmerman is one of just three ACC players on the list. The others are Chase Minnifield, a cornerback from Virginia and Will Snyderwine, a placekicker from Duke. Zimmerman and Drew Butler of Georgia are the only punters on the list.