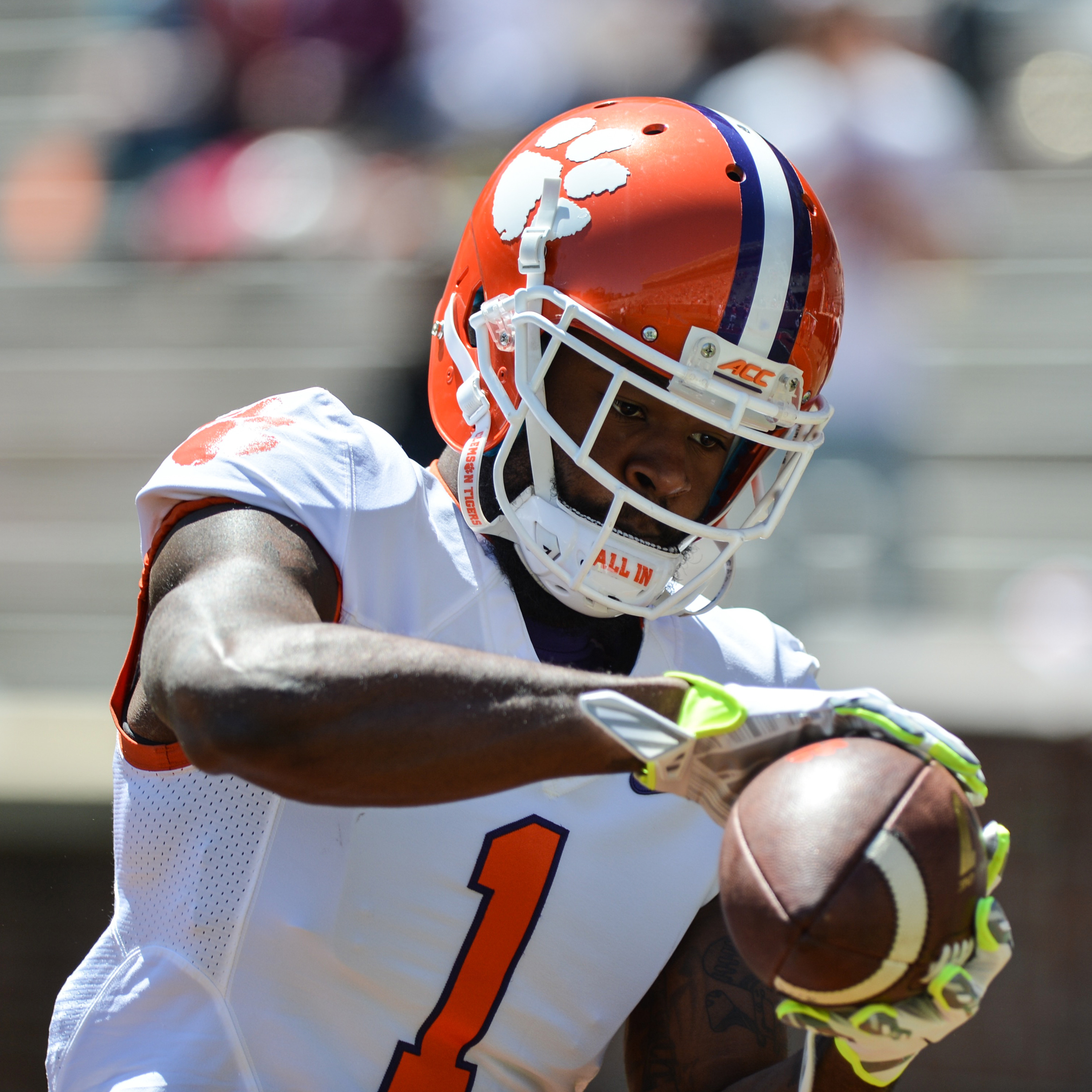 Clemson’s passing game shined in front of a record 50,500 on a sunny Saturday afternoon as the Tigers held their annual Orange & White Game, with the Orange team emerging victorious 17-9.

Fans got the opportunity to take a look at some returning impact players from last year’s national runner-up on both offense and defense, and got a sneak peek at some of the position battles across the board and what they have to look forward to in the coming season.

And despite the absence of big-play threats Mike Williams and Deon Cain, it was the young receivers that got their opportunities to make big plays down the field.

Hunter Renfrow came up with a big time 47-yard reception on the Orange team’s second play from scrimmage that to help set up a four-yard touchdown reception by the former walk-on five plays later to cap off a seven-play, 85-yard drive. Renfrow finished with five receptions for 85 yards and a touchdown.

The former walk-on quickly carved a niche for himself on the field as a playmaker, and the rising sophomore credited the team’s improved chemistry to Saturday’s performance, particularly in the passing game.

“It’s been a great spring getting better and trying to improve on this team’s chemistry, and I think today was a reflection of that,” Renfrow said. “The fans really showed out, and we had a great time. Football is all about repetition, just doing the same things over and over, trying to get better.”

The big passing plays didn’t stop there for the Orange team, as on its third possession, rising sophomore Ray-Ray McCloud showed off his explosive speed and athletic ability to beat the corner off the line of scrimmage for a 61-yard touchdown from Deshaun Watson.

McCloud finished the game with three receptions for 98 yards and a touchdown. For McCloud, the spring was about improving his technique as a receiver and finishing plays. He believes the other Clemson receivers answered the call of the coaches this spring in regards to finishing plays and becoming more complete players.

“Finishing plays has been a big emphasis this spring in the receiver room, and we’ve been doing really well with that,” McCloud said. “Speed wise, the game has gotten better for me, and now it’s a matter of continuing to improve my technique, like getting better separation from defensive backs and things like that. One of my individual goals was to get better at catching deep balls, and after (Saturday) I think I’ve gotten better in that area.”

“Coach (Dabo) Swinney, Coach (Jeff) Scott, and Coach (Tony) Elliott have been challenging me all spring in getting me more mature and consistent. I love the feeling of being on me to improve like that, and I love having them pushing me to make me a better player.”

McCloud wasn’t the only receiver getting pushed by coaches this spring. Yet a third rising sophomore, Trevion Thompson, another young receiver the coaches have been high on this spring, put together a strong performance Saturday, leading the White Team with six receptions for 87 yards.

Thompson, who caught a crucial third-down pass in the South Carolina game last season, is looking to have a bigger and more consistent role in a Clemson receiving corps brimming with depth, talent and playmaking ability. For Thompson, it’s about having confidence and continuing to stay competitive, particularly at receiver where Clemson has among the deepest pool of talent in college football.

“My goals for the spring were to become a complete receiver,” Thompson said. “It was about getting stronger in my release, being more physical with my routes with the DBs, and just getting better as a finisher. Those were some of the things I really focused on this spring.

“We’ve got a great receiver corps, and you’ve got to go out there every day and compete because no one’s going to slack off, and if you do, you’ll just keep falling to the bottom. My job is to become more consistent, and have that mindset of ‘I’m going to go get it.’ Just grind and become a better student of the game.”

Elliott, who along with Scott serves as one of Clemson’s co-offensive coordinators, is pleased with how the Tigers wrapped up spring practice, and emphasized the team’s need to get back to the basics while developing the chemistry that carried them to the National Championship Game last season.

In terms of the play of the receivers, Elliott reminds Tiger fans that as good as this receiving corps is, its play will only improve as Williams continues getting back into the swing of things and Cain returns to the team. Elliott is pleased with the competitive depth at receiver, and is excited for the offense’s overall potential in 2016.

“I thought it was very competitive on both sides of the ball,” he said. “We saw some good runs and some competitive catches. Overall, it was pretty clean and there are some things we need to get cleaned up, but I’m proud of the spring and the way the guys went out and performed. We’re focused on a lot of things, but it’s really about getting back to the basics and not expanding too much since we’re adding some new guys to the mix, and really start to develop that cohesion that made us special last year.

“I think we’ve got a lot of competitive depth at wideout, and this summer’s going to be huge for those guys to continue to build that chemistry and timing with Deshaun. Deon (Cain) is doing what he’s supposed to do to get himself back in the mix and we’re hopeful that he’ll be returning, so I’m really pleased with the overall depth at the position.”