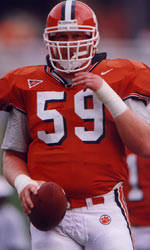 Clemson, SC – Clemson center Kyle Young has been named one of 21 centers to he preseason Dave Rimington Award Watch List. The announcement was made in New York by the Boomer Esiason Foundation, the sponsor of the award. The award, which goes to the top center in college football, is named after former Nebraska All-American Dave Rimington. It will be presented December 15 in Lincoln, NB.

Young was one of three finalists for the award last year, which was won by Nebraska’s Dominic Raiola, who is now with the Detroit Lions. Young and Maryland center Melvin Fowler were the only ACC players among the 21 preseason candidates.

This is the second preseason list that Young has been named to this year. He is also one of the preseason candidates for the Lombardi Award, which is given to the top lineman in college football.

Young, a native of Clemson, is in his third year as a starter for the Tigers. He was named a second-team All-American by Football News last season and was a third-team All-American by The Sporting News. He has been a first-team Academic All-American each of the last two years and will attempt to become just the second offensive lineman in college football history to be a three-time first-team selection.

He got his season off to a good start with an 84 percent coaches film grade and nine knockdown blocks. His 84 percent grade was the high mark among Tigers in the 21-13 win over Central Florida.