When Xavier Thomas walked onto the Clemson University campus in 2018, he did so with a strong resumé and high hopes. Rated as the No. 3 high school player in the nation by 247Sports, No. 4 by ESPN and No. 5 by PrepStars and Rivals as well as a top rating among high school defensive ends, the script was written for the 6’2, 255-pound native of Florence, S.C. to have an immediate impact as a freshman before evolving into a top NFL draft prospect by the time he reached his final season at Clemson.

Thomas earned first-team freshman All-America honors during his rookie season in 2018 by tallying 43 tackles, 10.5 tackles for losses, 3.5 sacks and two pass breakups in 304 snaps over 10 games.

That was followed by a sophomore campaign in 2019, when he was credited with 31 tackles, eight tackles for losses, two sacks, two pass breakups and a recovered fumble in 435 snaps over 12 games (eight starts). He earned Third-Team All-ACC honors as well.

During the COVID-19 pandemic-plagued 2020 season, when he had to overcome a bout with the virus along with strep throat, Thomas totaled only 119 snaps in seven games, finishing with 11 tackles, four tackles for loss, 3.5 sacks and a caused fumble.

In 2021, Thomas earned Third-Team All-ACC honors after registering 27 tackles, 5.5 tackles for losses, 3.5 sacks, two caused fumbles and a pass breakup in 476 snaps over 12 games (10 starts). He was also credited with a team-high 17 quarterback pressures.

What effect did the COVID-19 pandemic have on Thomas?

“I got overweight and depressed,” admitted Thomas. “I was about to quit football, but I worked my way back for the 2021 season. I had a good year, and everyone expected me to go to the NFL, but I had unfinished business, so I came back for an extra year (2022) and got into the best shape of my life.”

Unfortunately for Thomas, he suffered a foot injury in fall camp and missed the first five games of the 2022 season. He returned to play at Boston College in October. He posted two sacks, a caused fumble and quarterback pressure, stats good enough to earn him ACC Defensive Lineman-of-the-Week honors. He also won the Leather Helmet Award from the Boston College Gridiron Club as the game MVP.

Thomas said returning from the preseason injury was simply a matter of faith.

“I had already given my life over to Christ in 2021, so it was a big faith thing that I had already prepared for. Dealing with the foot injury right before camp…I knew I would come back, which I did, but I never got back to 100 percent, so I was on a limited snap count.”

On Nov. 7, it was announced that Thomas would have season-ending foot surgery after reinjuring the same foot.

So what is next for the player described as “an explosive edge rusher?”

“I’ll put a lot of thought into that after I have the surgery,” said Thomas a few days later. “It’ll be mostly a post-rehab thought, seeing my timeline and making a decision then. I’ll probably make a decision in late December in regards to where I am and how well my foot is healing.”

After recovering from the pandemic season in 2020 and two foot injuries in 2022, Thomas reiterated that it is his faith that is keeping him in an upbeat mood.

“Giving my life to Christ, having faith and knowing that His plan is better than mine, no matter what,” is what Thomas said is helping him cope. “I’m not going to question anything throughout my journey, because my journey is just getting started. It seems like it’s been a long one, but it’s just getting started. I’m a young guy, and there’s really nothing to be down about, because I know He has a plan for me.”

Regardless of whether he opts for a sixth-year option at Clemson, Thomas said he has not regretted any of his time in Tigertown.

“I want to thank the Clemson fans for always supporting me and being there for me throughout my whole career. I know there’s been a lot of ups and downs, but we’ve always fought back and persevered through all of it.”

What is the one word Thomas would use to best describe Clemson? He said, “family.”

“Clemson is a place of love…it’s like a family here. That’s the reason I came to Clemson, because it’s not just about football, it’s about a brotherhood.

“The coaches love you like you’re their own son. It’s like a family that you build for life, and you take it with you throughout your whole journey through life. The friends and brothers will carry on. You’ll go to each other’s weddings and baby showers. These are relationships that you’ll have for life. 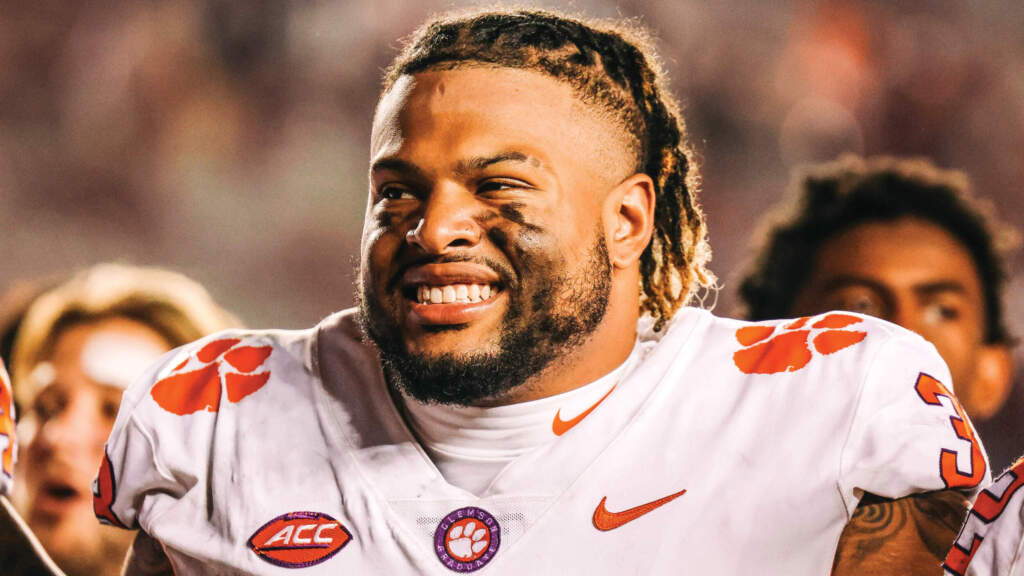