Xavier Thomas thought the 2020 season would be his chance to cement his name as a top NFL draft prospect. In his first two seasons as a Tiger, the defensive end tallied 74 tackles, 18.5 tackles for loss and 5.5 sacks, including an iconic, bone-jarring sack of Syracuse quarterback Eric Dungey to secure a Clemson victory in 2018. Thomas’ performance that year earned him near-unanimous freshman All-America honors and Third-Team All-ACC recognition after his sophomore campaign in 2019.

However, the COVID-19 pandemic and its far-reaching effects presented the Florence, S.C. native with unprecedented adversity. After contracting the virus late in the summer of 2020, he experienced severe respiratory symptoms. Furthermore, Thomas came down with strep throat, which added a new slew of issues.

“During that time, I had a lot of breathing problems. I couldn’t train the way I wanted to. Then getting strep throat set me back even more, and so I gained about 20 to 30 pounds in that process. I’d never been that big before in my life, and playing that heavy was scary for me.”

Those health complications brought dark times for Thomas, who found himself relying heavily on his faith and relationships with coaches, friends and family in order to maintain his mental health. In addition, keeping his eyes set on returning to the football field kept him grounded and motivated during the recovery process.

Head Coach Dabo Swinney planned to ease Thomas back onto the field by participating in only four games and qualifying for an extra redshirt year following 2020. Then, the NCAA’s blanket eligibility waiver allowed Thomas to play to any extent that his body would allow him, which ultimately resulted in seven games of action.

Although he only logged just 119 snaps and one start, the pass rusher showed flashes of his previous dominance. He recorded 11 tackles, four tackles for loss and 3.5 sacks, including a strip sack in the Tigers’ 52-17 win over Pittsburgh in November. However, Thomas, one of the top-rated prospects out of high school, still did not feel he was anywhere near the same level physically compared to his freshman season.

“It was a relief to be back on the field, but I couldn’t play the way I really wanted to. I couldn’t do what I knew I was capable of. It was depressing because I had planned for it to be my breakout year. But it didn’t work out that way, so I’m just following God’s plan.”

In December, Thomas graduated from Clemson with his degree in criminal justice before returning for one more season as a graduate student. In the subsequent spring and summer, Thomas finally regained his health and dedicated large portions of extra time towards getting his body back into a physical state where he believed he could compete at an elite level.

Throughout the summer, he returned to the facility every day following the team’s morning workouts and added a second session on his own. This additional work on the field and in the weight room refueled Thomas, adding a new sense of hunger for his final season.

Upon starting fall camp with the team’s first official practices, his primary focus was to help establish a brotherhood and prove to his teammates that he was back on top of his game. It did not take him long to realize that the 2021 Tiger defense had a special chemistry, as the unit gelled very quickly thanks in large part to the presence of veteran players, including Thomas and sixth-year Tigers James Skalski and Nolan Turner.

Although he admitted that he was not always the most vocal leader in the locker room prior to 2021, he felt himself opening up to a new role in mentoring newcomers in the defensive line room.

On the field, Thomas established lofty yet realistic expectations and personal goals for himself entering the fourth season of his college career.

“I don’t want to sound selfish, but I want to be the best defensive end in the country. And I know that I am capable of that. I want to get to a solid 260 pounds, and I want to improve my run game by being more physical and noticing backfield sets. That way, I can play more freely and predict the plays that are coming to me.”

With his knowledge of the playbook and three years of experience on Brent Venables’ defense under his belt, Thomas is poised to make a bigger impact than ever in the 2021 season. However, it was the adversity and personal setbacks that he faced off the field that the defensive end recognized as crucial to his maturation and development.

In the future, Thomas envisions himself rushing quarterback and stuffing the run for an NFL team on Sundays, and he will stop at nothing to prove that he deserves to hear his name called on draft night in 2022.

But for now, his focus is locked on the 2021 season and leading the Tigers to another College Football Playoff run for a chance at his second national championship ring.

More than anything else, Thomas is just happy to be back. 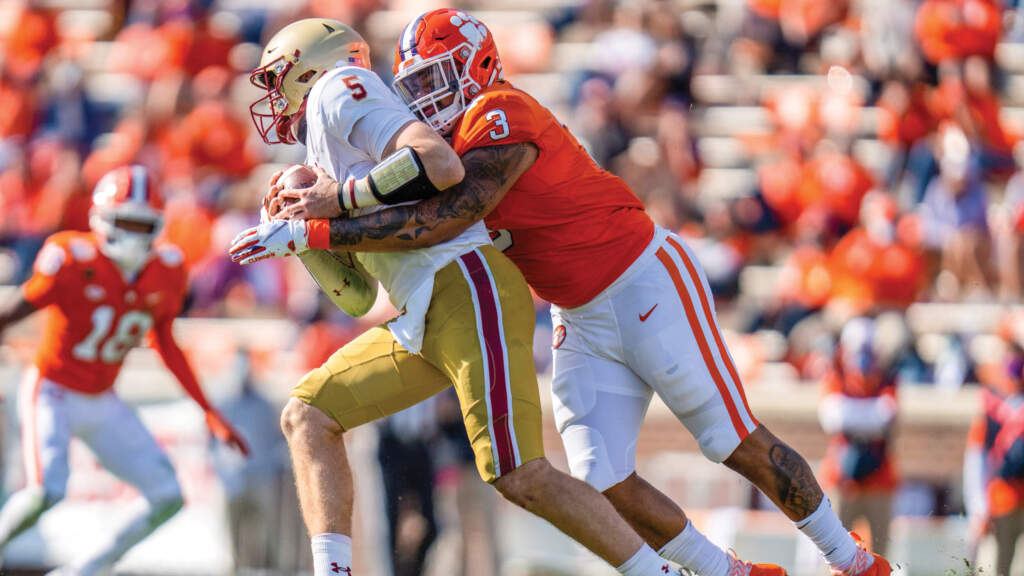