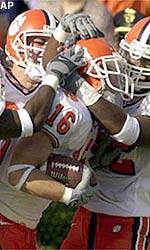 Clemson, SC-Wofford will replace Tulane on Clemson’s 2001 football schedule, Athletic Director Bobby Robinson announced today. The contest will be played September 8 and will kickoff at 1:00 PM.

Tulane informed Clemson in January that it would not honor its contract to play at Memorial Stadium on October 6, 2001. “We wish to thank Wofford for making changes in their schedule and helping us with a difficult situation,” said Robinson. “They have a winning program that is making great strides under Coach Mike Ayers.”

The Terriers had a 7-4 record last year and were ranked 23rd in the final Division I-AA poll. Among the victories was a 24-6 triumph over Louisiana-Monroe, a Division I-A team. Clemson will return 11 starters and 54 lettermen from its 9-3 squad of 2000.

This will be the 13th meeting between Clemson and Wofford, the first since 1981. A similar circumstance led to that contest 20 years. In April of 1981, Villanova decided to drop football. When Clemson needed an 11th game, Wofford, then an NAIA school, was added to the schedule.

Robinson said the first two games would kickoff at 1:00 PM. The only other kickoff available at this time is the October 11th game at NC State. That contest, which will be televised by ESPN, will kickoff at 8:00 PM. Times for the Sept. 15 Duke contest and the September 22 Virginia game will be announced in July. The other game times will be known 12 days prior to kickoff.

Clemson will open the season September 1 against Central Florida, the first meeting between the two schools. Clemson’s Spring Game will be April 7 at 3:00 PM at Clemson Memorial Stadium. Fan Appreciation Day is slated for August 12th.